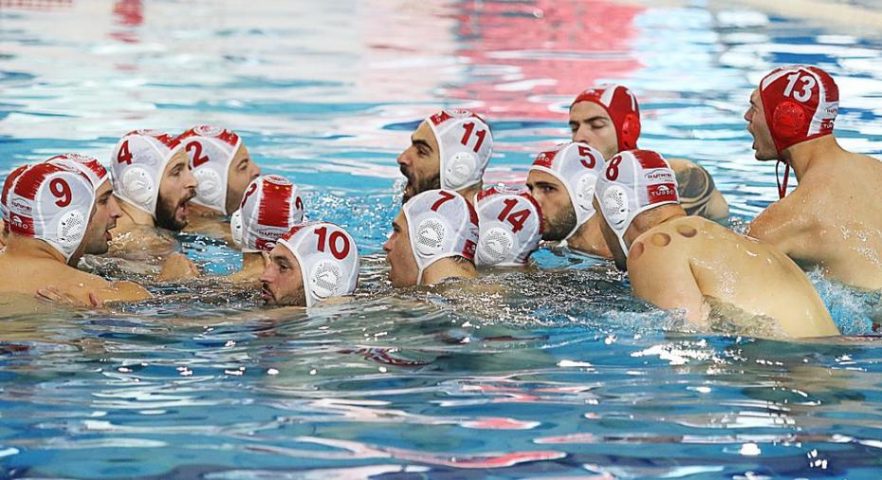 The effects of the coronavirus pandemic are still present in the sports world.

But, some of these effects had maybe positive results.

Today, we write about the Greek water polo. The 96th edition of the Greek male water polo league begins this weekend.

Until the season 2019/20, twelve clubs played in the A1 League. Because of the coronavirus pandemic, the Greek Federation decided that there would be no relegations from the A1 League in that season but that there would be promotions from the A2 League. Therefore, 14 clubs participated in the 2020/21 seasons. But, the lockdowns in Greece due to the pandemic interrupted the league in 2021, too. It was uncertain when the league would be finished and if it would be completed. Therefore, the Federation made the same decision – no to relegations, but yes to promotions and the league expanded to 16 clubs.

After a 16-club league in the last season, the number of participating teams remained the same. The Federation didn’t change the competition formula, maybe realizing Greece had 16 enough strong clubs for the A1 League.

The clubs are split into two groups of eight teams in the first stage of the league. After 14 rounds, two new groups will be formed (for places 1st – 8th and for places 9th – 16th )

Number of clubs increased, but only one big favorite is on stage

So, the Greek League is the biggest in Europe in terms of the number of participating teams. Hungary and Italy have 14 clubs each, while most of the other national championships are composed of 10 or 12 teams.

The number of clubs increased, but the number of favorites remained the same. Only one club is considered the heavy favorite for the title. Of course, it is Olympiacos, which doesn’t target only the trophies in the national competitions but also in the Champions League. Olympiacos enters the new season with a new head coach and a stronger team. Legendary Igor Milanovic arrived at Olympiacos to replace a very successful Theodoros Vlachos, who is concentrated only on the work with the national team from this season. Besides Milanovic, newcomers to Olympiacos are some outstanding players, like Marton Vamos, and Alexandros Papanastasiou. Besides Vamos and Papanastasiou, Olympiacos’ superstars are Filip Filipovic, Ioannis Fountoulis, Andro Buslje, Konstantinos Genidounias, Konstantinos Mourikis, two excellent goalkeepers Marko Bijac and Emmanouil Zerdevas, than Nicolaos Gkillas, the best scorer of the recently finished European U19 Championship in Podgorica, etc. 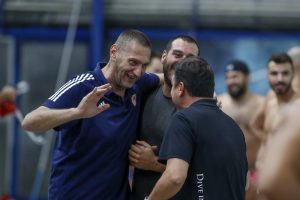 Olympiacos holds many records, but nobody is invincible

Olympiacos will chase its 37th national title and 11th in a row. In the 21st century, the Red Whites from Piraeus haven’t been the Greek champions just twice – Ethnikos won the championships in 2006, and Vouliagmeni in 2012.

Olympiacos is a record holder in the longest unbeaten run in the Greek championships. Between May 2013 and October 2020, the Piraeus-based club played 208 games in the national league and recorded 207 wins and one draw. Vouliagmeni ended that winning streak with an 8:7 victory on October 10, 2020.

Still, nobody, not even Olympiakos, is invincible. Last season, only Apollon Smyrnis managed to upset and beat Olympiacos. It happened in the semifinals of the playoffs (10:9), but the champion took strong revenge in the next game (17:7). Vouliagmeni grabbed one point in the game against Olympiacos in the regular season (12:12), but it lost all three matches in the final.

Vouliagmeni and Apollon are some of the clubs that might surprise Olympiacos this season.

Vouliagmeni has a new coach, as well as Olympiacos. Another Serbian water polo legend will coach the 2nd-best Greek club – Vladimir Vujasinovic , who replaced Croat Hrvoje Koljanin. Vouliagmeni left without several players, including Olympian Dimitrios Skoumpakis, Croats Luka Lozina and Lovro Paparic, while great player Emmanouil Mylonakis retired. But the list of the players who arrived in Vouliagmeni isn’t short. Two Americans – Matt Farmer and Dylan Woodhead, will be Vouliagmeni’s foreigners. Dimitrios Nikolaidis, the player of the Greek national team, returned to Greece from Spandau and joined Vouliagmeni. There is no doubt Vouliagmeni will be a strong opponent to Olympiacos.

Ten – fifteen years ago, Panionios was among the best Greek clubs. But, it passed through a period of crisis, and it was relegated to the A2 League. However, in the last few years, Panionios has returned to the big stage. Last season, it finished in 3rd place and plays in Europe this season. Panionios has also been reinforced by excellent players – a national team player, Konstantinos Gkiouvetsis, Georgia’s Andria Bitadze, and an experienced Alexandros Gounas. Panionios already opened its season with a solid performance in the Champions League Qualification Round 2. 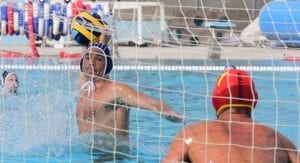 Alexandros Gounas, who was the best scorer in the last season with 104 goals, moved from Apollon to Panionios Photo by Petros Spanoudakis/koe.org.gr

Apollon Smyrnis, PAOK and Ydraikos will also aim spot in a higher half of the table and battle for LEN competitions.

Ydraikos, with a new coach Nikos Karamanis, renovated the team. Many players arrived. The club is seriously preparing for the national championship and the LEN Euro Cup.

PAOK didn’t change the coach. Greek water polo legend Theodoros Chatzitheodorou, who won the Champions League playing for Olympiacos and Partizan, has been successfully leading the Thessaloniki-based team in the last few years. PAOK, which returned to the A1 League three years ago, has constantly been progressing. Last season it finished 6th in the league and secured itself an appearance in the LEN Euro Cup. There were no big changes on the roster, but it seems that the team is stronger than in the past season. Key players

Apollon Smyrnis kept almost all of the pillars of the last season’s team, signed Nikola Bogdanovic, the best scorer of the 2022 Serbian League and a few more players. The club has high ambitions.

Ethnikos, the only Greek club with more national titles than Olympiacos (38) renewed the contracts with almost full first team and was reinforced by a few young players and Brazilian Aghuila De Freita Roberto.

Panathinaikos was also very active in the transfer market. Among the club’s additions is Serbia’s goalkeeper Dimitrije Risticevic, several good Greek players, which indicates that Panathinaikos’ goals are higher than to avoid relegation.

Peristeri will enter the new season with a new and experienced goalkeeper, as well as Panathinaikos. Team USA’s goalie Drew Holland moved from Chios to Peristeri.

Elysiakos, the returnee to the A1 League, will also have foreigners who had gained experience at big FINA competitions. Two Japanese signed for Elysiakos – Kenta Araki and Atsushi Arai.

Besides Elysiakos, Nireas Chalandriou was promoted from the A2 to the A1 league last season. It will try to keep a spot in the elite division with a team composed of Greek players.

Composition of the groups and calendar of the first phase

The first Greek water polo championship was held in 1923 in the form of the Panhellenic championships. The competition changed its name throughout its history. Since 1987, it has been named A1 National Men’s Division