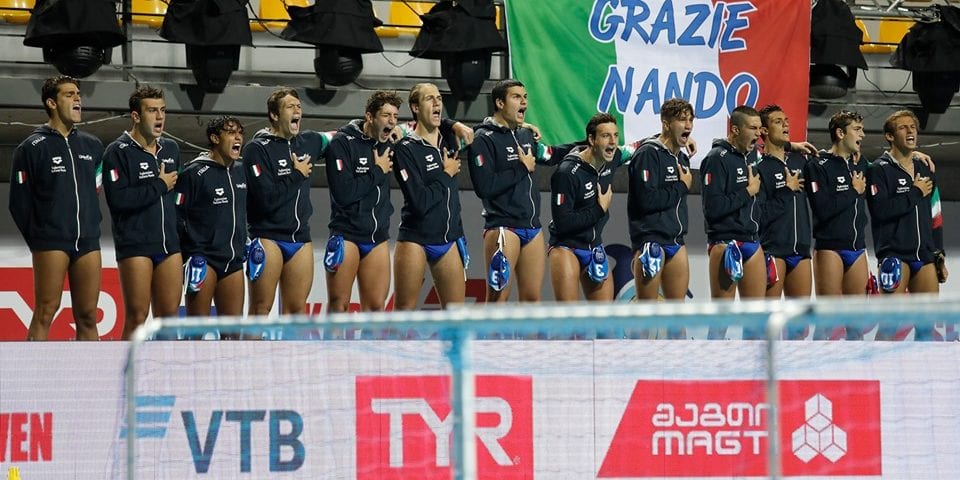 Italy clinched the gold medal at the LEN Men’s European U17 Championships, that was completed in Tbilisi (Georgia) today.

The Italians defeated Spain 10:6 in the final match. The young Italians followed their senior national team, which beat Spain 10:5 in the final of the 18th FINA World Championships in Gwangju a few weeks ago.

The bronze medal was won by Hungary. The Hungarian juniors dominated the match for the 3rd place and beat Greece 10:4.

Montenegro defeated Serbia 11:10 after a hard-fought battle in the encounter for the 5th place. Germany took the 7th place, as it beat Russia today (12:4).

A few days before the Championships in Tbilisi, the team of Italy left without a head coach Ferdinando “Nando” Pesci, who suddenly died. The team was guided by Pesci’s assistant Massimo Tafuro. Тhe Italian teenagers managed to recover for an emotional shock. Before the final, they recorded five consecutive wins in as many games. Spain posted 4 wins, while they shared the points with France in the last round of the Group Stage.

The Italians opened the third period with two goals and earned a new 2-goal advantage (5:3) with 6 minutes to play in the quarter. They had a nice chance to go 6:3 up two minutes from the end of the quarter, but Spain’s goalkeeper Aguire blocked a penalty shot from Silvestri. Italian forced another penalty shot just 27 seconds before the last break. This time, Cassia sent the ball home and after the third period, Italy had a solid 6:3 lead.

In the 2nd minute of the last quarter, Andrade netted for 4:6, but just 16 seconds later Italy got the 5th penalty in the match. Ferrero converted it and the gap between the teams was three goals again. In next Italy’s attack, Ferrero hit the back of the net and his team went 8:4 up. The Italians controlled the match until the end. Iocchi Gratta scored from a penalty (6th for Italy) to set the final score 10:6 a minute and a half from time. Before that penalty Casabella received the red card because of brutality foul.

Greece first got on the scoreboard in the bronze medal match, but Hungary took control quickly and built a 3:1 lead before the first break. Greece converted a man-up to come close (2:3) in the 1st minute of the second quarter. But, from that point on, Hungary ruled the field and jumped to an 8:2 lead (20th minute). There was no way back for the Greeks. Hungary, led by Szeghalmi and Peto, who each scored 3 goals, maintained an advantage for a 10:4 victory.

There were a lot of twists and turns in the Balkan derby which decided the 5th place. Montenegro was leading 4:1 and 5:2 in the second period, but Serbia was able to come back. The Serbs equalized in the middle of the third period (7:7) and entered the last period with an 8:7 lead. They doubled an advantage by converting an extra player for 9:7. Midway through the last quarter, Montenegro leveled the score (9:9), but Serbia earned a new lead from a penalty shot (10:9). The last two minutes offered a lot of thrills.

Montenegro netted two goals in a span of 57 seconds for an 11:10 win. A winner was scored by Vujovic 55 seconds before the end.

Germany played disciplined in defense in the match for the 7th place. Russia its first goal scored in the 14th minute, when Germany was already 3:0 up. The Germans dominated until the end and recorded a big 12:4 win.