The traditional Keep Cup in beach water polo will be played in three countries this summer.

The Keel Cup was established in 2015. Until this year, the matches were played in the river pools and the lake pools in Serbia. From year to year, the Cup has been developing. The 2020 Keel Cup will be the series of five tournaments in Croatia, Serbia, and Montenegro.

The Keel Cup will start on the shore of the Adriatic Sea – in Gradac (Croatia). Then, three tournaments will be held in Serbia, while the last one will take place in Herceg Novi (Montenegro). 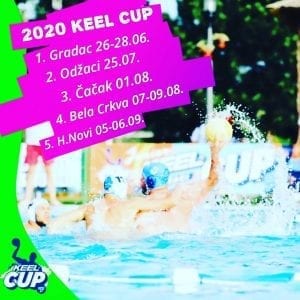 Two Olympic champions will be the promoters of the 2020 Keel Cup. Ivan Buljubasic, who won the Olympic gold with Croatia in London in 2012, will the promoter in Gradac. Andrija Prlainovic, the current Olympic champion, will be in that role in Cacak.

The four-player teams compete in the Keel Cup. The deadline for the entries is June 20.

“We have been trying for a long time for the Keel Cup to come to the Adriatic Sea cities, and we are happy that the two tournaments will be played in beautiful places (Gradac and Herceg Novi) that love water polo. We are arriving in Croatia and Montenegro. The traditional stops of our series – Bela Crkva and Odzaci – are already strong beach water polo bases in Serbia. Besides, for the first time, we are coming to the Morava river (Cacak). I am happy and proud because we will again present that water polo is a beautiful sport that must be played in the summer season wherever it is possible”, the competition director Nenad Tomic said.

“This year, we will have Ivan Buljubasic and Andrija Prlainovic as the promoters. I believe that fact confirms that the concept we are developing is worth it and that what we are doing is in favor of water polo, tourism, and good fun. I am grateful to Prlainovic and Buljubasic for supporting us. After the 2020 Keel Cup is completed in September, their names will be at the top of the long list of participants. So, don’t wait and sign for the tournament!”

Hats, music, sunglasses, awards, and a pleasant atmosphere will be features of the Keel Cup this summer at a record five locations, the organizers underline.

The mail address for the entries is keelcup2020@gmail.com.