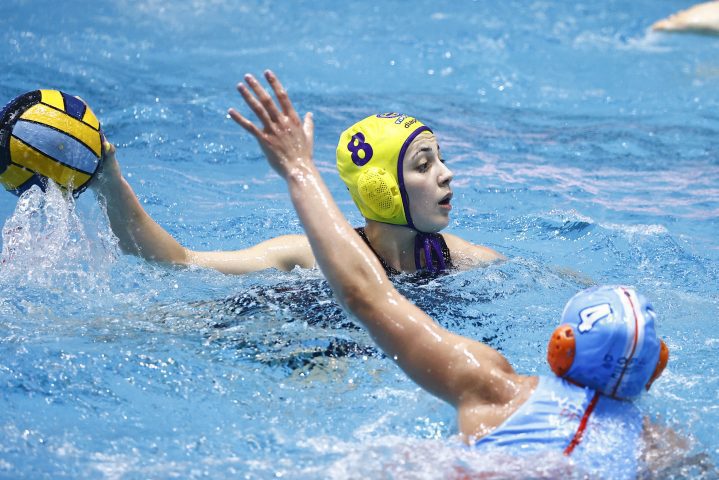 It took thirteen successful shots from the 5m penalty mark before Krisztina Garda’s saved shot by Alda Magyari to separate UVSE and Dunaujvaros after a hugely entertaining and dramatic 11-11 draw in regulation time.

Kamilla Farago was once again outstanding at Alfred Hajos with five excellent scores, while Gurisatti and Szilagyi were back to their usual best for Dunaujvaros, contributing in a big way.

UVSE now have the lead in the series 1-0 which continues on Thursday 16th April.

Dunaujvaros and Atilla Mihok came into this game with a good rhythm – particularly with the 8-6 victory over UVSE earlier this week that got them into the championship play-offs in the first place. They did well to lead 7-4 around the half-way point in the first leg of a three-set tie.

However, with the return of UVSE’s two critical players, Rita Keszthelyi-Nagy and Natasa Rybanska, UVSE were rejuvenated and offered a different prospect for the Orange and Blues.

It did look for a moment like Dunaujvaros would hold out for the win as Dorottya Szilagyi made it 11-10 with three minutes to play. However, a goal 14 seconds from time from Keszthelyi sent the game to penalties – which UVSE managed to win.

It was the UVSE keeper that eventually saved the fourteenth penalty – as the flawless Krisztina Garda made practically her first mistake of the season, gifting the game to UVSE.

However, Dunaujvaros will want to have their revenge at Eva Fabo in 6 days time.