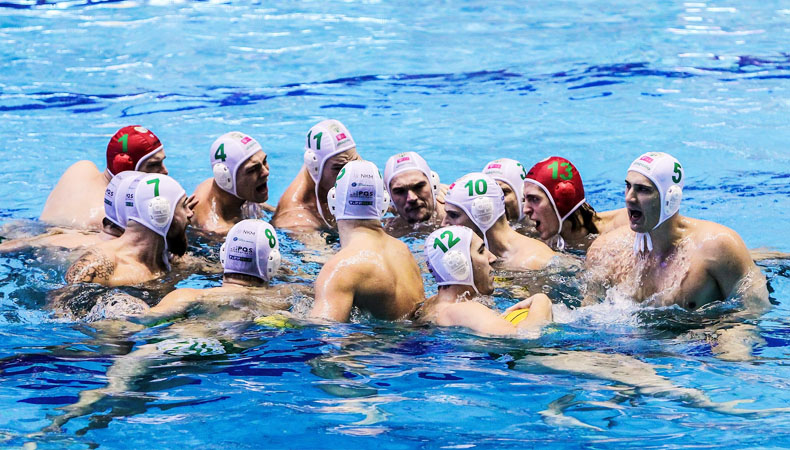 All spots are booked in the Final Eight: five sides will return after last year (Recco, Brescia, Barceloneta, Jug and Olympiacos), while there will be three newcomers. Besides host Hannover, BPM Busto and Ferencvaros confirmed their respective places in the finals in the penultimate round of the prelims.

In Group A the last available berth went to Ferencvaros as expected. After some struggles in the first period (1-1), the Hungarians showed their real face and with a 5-0 rush in the next eight minutes they put the match against Steaua on the right track. This is going to be the first F8 appearance for FTC, which won the Euro Cup’s previous two editions and the Super Cup last autumn.

Here the fight for the second place was also open but Brescia had to climb an enormous mountain to keep it as they visited Pro Recco. That proved to be a mission impossible: the hosts quickly jumped to a 4-0 lead and even though Brescia bounced back a bit for 6-3 till halftime, two fast goals from Recco early in the third decided the outcome. Facing Zvezda in the last round, Recco is set to advance to the F8 with a perfect 14/14 sheet.

Barceloneta took over the second place with a convincing performance against Zvezda and needs three points from Eger in the last round to arrive to Hannover as the No 2. seeded team in Group A.

The game played for the fifth place – with an extremely slim hope that later a hiccup of Ferencvaros might open the way for the winning side in Moscow – ended up in a scoring festival. Dynamo looked to gain an easy win at 7-2 but they needed to push at the end to clinch it with 15-13. This confirmed Eger’s exit, the Magyars are missing the cut after four consecutive appearances.

And fellow Hungarian side Szolnok is also out from the finals after four years. In the big match of Group B, the 2017 champions needed a win against BPM to stay alive but had to settle for a draw.

It was an outstanding battle, beginning with a rare 0-0 opening period. Szolnok then took a 2-0 lead but the Italians responded with three straight goals and led 2-3 at halftime. BPM then went 2-4 up before Szolnok managed to score again, after 9:10 minutes (they missed two key attackers Andrija Prlainovic and Gabor Kis badly).

But once they found the back of the net again, they kept rolling and early in the fourth Milan Aleksic put them ahead once more at 5-4. Later they had connecting 6 on 5s to double the gap but the Italian defence did a brilliant job and soon it was even, this time Sport Management managed to halt their scoreless phase at 7:55 minutes. Within 50 seconds Vincenco Dolce netted a one-timer and this action goal proved to be sweeter than sugar – it sealed BPM’s qualification as Szolnok only equalised 1:44 minutes from time but couldn’t score the winner.

In fact, it was the draws in the first part of the season which rocked the Hungarians chances: on Day 4-6 they had three ties in a row including two shocking ones in Berlin and against Hannover at home (and a third against Olympiacos where the Greeks levelled the score 2 seconds from time).

Now BPM can even have a shot at the top spot, just like Olympiacos – which downed Hannover with ease – since Jug continued its miserable run and fell at home to fellow Croatian side Jadran. With 6:00 minutes to go the home side led 6-5 but were unable to score again while Jadran netted two and won the game.

This was Jug’s second straight defeat in the prelims, between the two they were beaten by Mladost in the Regional League final, a quite unusual losing streak in the water polo palace on the shores of the Adriatic. Jug meets Spandau on the last day and is still favoured heavily in that encounter – the Germans were bettered by Mladost at home in a 29-goal flood – but another upset might cost them the leading position which they have held since Day 2…