Australia impress while USA and Brazil go through the motions 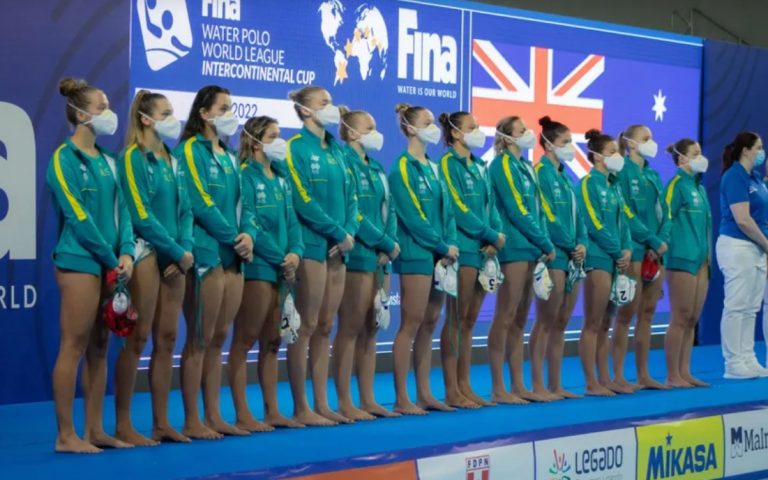 Day 2 of the FINA Intercontinental Cup in Lima was slightly better than the first, primarily because of a really fun contest between Canada and Australia. The Aussies won, thanks in large part to Bronte Halligan’s six goals, but Canada were very competitive and can take many positives from the game.

The best game of the day was undoubtedly between Australia and Canada. Australia were fantastic going forward and aggressive in defence. While Australia were worthy winners, Paul Oberman may be slightly concerned by how his team’s performance levels tailed off at the end. However, on the whole, Australia were really impressive for large parts of the game.

For Canada, they stuck with it, but they couldn’t cope with the Stinger’s class in attack (particularly on 2m/second pit). They looked a little fazed by the stature of some of the Australian’s, and it seemed to take time before they adjusted in-game. To the Canadian’s credit, their man-up was at times very good, and towards the end, created some really good attacking movements.

On the whole, however, Australia were well worth the win.

The first quarter was really even. Australia carried a big threat on 2m that Canada struggled to deal with, but the Maples were clinical from their 6 on 5 plays (goals from Kyra Christmas on the right and Verica Bakoc on the left). Bronte Halligan netted twice in the opening period, one of which was a beautiful bouncing shot from distance, while Tanealle Fasala finished a well-worked man-up on the post for the Stingers.

Australia stormed out the blocks in period two, grabbing three back to back goals to open up a sizeable lead for the first time in the match. Amy Ridge scored on the rebound from an initially excellent save by Jessica Gaudreault, before Bronte Halligan secured her hat-trick when she took full advantage of Gurpreet Sohi’s second, and perhaps harshly awarded, personal foul. A few attacks later, it was four for Halligan, with a perfectly placed cross-cage shot from the right.

Canada were on the ropes, they just couldn’t build any momentum in attack, nor stop Australia with their really sleek 6 on 5 plays. After Paul Oberman’s time out, Bronte Halligan made it 5 for her in the game, and while Kyra Christmas got one back with a quick and driven bounce shot from the top, Bronte Halligan got yet another goal on the extra-player move to make it 8-3.

Canada did eventually settle a little, and two goals at the end of the half from CN Sabadell’s European Star, Gurpreet Sohi, gave Canada a real lifeline in a match in which they were very much second best in the game.

The third period was end to end but without much goal-mouth action. The game looked to be getting scrappy, but it was Canada who got the next score, with Kelly McKee finding space and more importantly the finish to put her side back within two goals.

The Stingers got back a score on the breakaway via Charlize Andrews to make it 9-6, and Canada should have definitely replied immediately after had Shae La Roche not attempted a lob at close range that hit Gabi Palm’s crossbar. Canada were then made to pay as the Australians restored their four goal advantage as Tanealle Fasala put the ball into an empty net when Bronte Halligan drew the keeper.

Charlize Andrews got her second of the game just before the end of the quarter, to cancel out Gurpreet Sohi’s finish, her third of the game, to ensure the Aussies led by four going into the last.

It didn’t take long in the last period before Abby Andrews left her mark on the game with a well take goal, before Pascalle Casey netted for the first time for the Aussies.

The difference in the game was perhaps most evident  with four minutes to go in the last period when Zoe Arancini netted her goal from a double man up. The first exclusion was from the centre-forward position, before the second was a lazy and perhaps naïve foul on 2m.

All credit to Canada, who kept plugging away until the end – it was Verica Bakoc with three tidy finishes to make the scoreline look a little healthier, with the last being a well executed man-up play from David Paradelo’s timeout.

But Australia had done enough in the earlier part of the game to ensure the win was theirs.

It was another day of plain sailing for the Unites States National Team in the first game of the day as they overcame Cuba without breaking a sweat. The squad and the coach may be totally different, but there is still something very inevitable about the outcome when the USA play. Jenna Flynn followed up yesterday’s six goals with another five today, while Taylor Smith went one better today than yesterday with four goals. Emily Ausmus continued to link the play and got four goals herself, while Margaret Hawkins marked her inclusion in the side today with a double score at the expense of Ava Knepper.

Cuba’s two only goals both came courtesy of Dalia Grau. The first from the 5m Penalty spot given away by Julia Bonaguidi towards the end of the second period, before a decent man-up goal in the fourth quarter off Madonnis Chavez’s pass.

It was a more successful day for Brazil as they beat their South American rivals, Colombia, by 20 goals to 4. It was seven heaven for Trieste’s Samantha Rezende, who looked very good in front of goal. Leticia Belorio netted her second hat-trick in as many days, while Ferreira, Palaro Dias and Ana Beatriz all converted twice.

It wasn’t difficult to see that Colombia are miles away from Brazil in their development. Sara Agudelo had as good a game as a goalkeeper who concedes 20 in a game can have for Colombia, but it was going forward that Colombia were really languid – they didn’t create enough guilt-edge chances and when they did have the opportunity to shoot, their finishing was dismal.