Australia have finished in 5th place after a surprisingly straightforward win over the Netherlands. Both teams could have quite easily been playing for a medal, but they found themselves contesting for 5th place instead. In a distinctly average showing from the Dutch who looked demotivated, they found themselves 8-2 down at half-time, and although they improved in the second half, the damage had already been done

In the earlier classification match, Canada were untroubled against China to finish seventh. The Canadians may ponder on what could have been if they had maybe bagged a few extra points in the preliminary round, but have enormous potential for the future.

Australia finishes fifth at the Tokyo Olympic Games after beating the Netherlands in convincing fashion at the Tatsumi Water Polo Centre. In a disappointing showing from the Dutch, Australia played with confidence and looked good for the win from the start.

Neither of these two sides would have wanted to play for 5th and 6th coming into the tournament, but it was clear from the off that Australia certainly didn’t want to lose this one. The two sides met earlier in the competition in a tight 15-12 contest which couldn’t be any more different from this game.

Going into the game, everyone including the two sets of players would have thought this fixture would be close, however, the Australians didn’t ever give this Dutch side a look-in. The Aussies were so assured in defence, and somehow everything they tried in attack seemed to come off. The Dutch were poor but even the most partisan Netherlands supporters would admit the score wasn’t a fair reflection of the game.

The Netherlands are without a medal for the third games in a row, however, with one of the tournament’s superstars, Simone Van der Kraats, to build a team around, they’ll be back stronger.

The Aussies were really up for the game and it was reflected in the score after the first quarter. Both team’s number fours were on the scoresheet nice and early – Bronte Halligan for the Aussies and Sabrina Van der Sloot for the Dutch. However, it was Keesja Gofers who stole the limelight with two classy finishes when swimming in from the right, before Hannah Buckling gave Australia a three-goal lead soon after with a drilled shot past Debby Willemsz. To complete a nightmare quarter for the dutch, Rowie Webster made it 5-1 with a rebound at close range from a Willemsz fumble.

Gofers continued where she left off in the first quarter by giving the Dutch defenders nightmares on the right-wing – her lob on the buzzer was her third and her country’s sixth. Tilly Kearns then made it seven within the last ninety seconds of the quarter to somewhat nullify an earlier Simone Van der Kraats penalty. A horrible mix-up between Van der Kraats and Willemsz then gifted the Australians another goal right on the buzzer at the end of the half from Bronwen Knox which pretty much summed up the performance from the Netherlands.

The Australians continued to demoralize the Netherlands into the third, and when Vivian Sevenich converted for the Dutch, they immediately responded with a Bronte Halligan bounce shot. When Maud Megens scored emphatically from a 5m penalty, it seemed inevitable Australia would just go up the other end and score their tenth – which they did through Lena Mihailovic. Amy Ridge then made it 11-4 not long after with a tap-in at the back post to give Australia a seven-goal lead into the final quarter.

Van der Kraats and Sevenich netted early in the last period to make a contest of the game, and in fairness to the Dutch, they did. Van der Kraats scored a brilliant extra player goal to bring the Netherlands within five goals, but a conversion from the Stinger’s left-hander, Abby Andrews, sealed the game.

Canada saved their best water polo for their final classification game against China, as they secured a 7th place finish in Tokyo with a well-deserved victory. Unlike during large parts of their Tokyo campaign, they were really cohesive in defence whilst clinical going forward.

China, who have seemed to drop off since exiting at the quarter-finals, never really build on their comeback from three goals down in the first quarter and made things rather comfortable in the end for David Paradelo’s Canadian side.

Whilst, on the whole, the tournament has been disappointing for Canada on the results front, it is likely that many of these players will once again play in Paris in 2024. They are more than capable of competing with the best in the world and this team will only get better. The same could be said for China, who will have to work hard to fend off Japan’s challenge to remain the best Asian side. However, if they can keep the services of Petar Porobic, they may find themselves at the business end of tournaments more often.

Canada had the better start of the two sides, establishing a three-goal lead after four minutes with goals for Emma Wright at centre-forward, Kyra Christmas on a man-up situation and Monika Eggens from range. However, China grew into the game and fought their way back to parity with conversions from Guannan Niu, Xinyan Wang and Jing Zhang.

However, with just under fifteen seconds left in the quarter, Axelle Crevier reinstated her side’s lead with a shot from 5m. 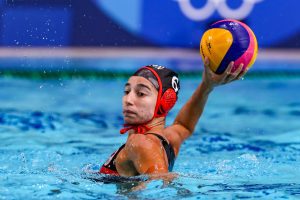 Having surrendered a three-goal lead in the first, Canada were far better at protecting their own in the second period. The Canadians began the second quarter in the same fashion they began the first with more goals from Kyra Christmas on the right and a penalty shot from the captain Monika Eggens. However, China kept pace as VAR awarded Huan Wang a goal after reviewing a shot that seemed to sit up on the goal line.

Jing Zhang put away a super snap-shot from distance, but not before Shae La Roche and Elyse Lemay-Lavoie netted their first goals of the game before Kyra Christmas secured her hat-trick to give her side daylight at 9-5. China should have had a sixth with the last attack of the quarter, but Claire Wright made an excellent save from Yineng Shen’s close-range shot.

Into quarter three, Jing Zhang secured her third with a bouncing effort on a man-up but not before Christmas continued her good goal-scoring run with a rocket of a shot to give Canada their tenth.

Canada then strangled the Chinese with three more unanswered goals as Crevier grabbed her second in the game with a well-judged lob from the right, Emma Wright made it two from two at centre forward and Joelle Bekhazi found the net from distance to make it 13-6 at the turnaround.

Into the last, an early Kelley McKee goal was cancelled out by another Zhang score, but Bekhazi and Wright both netted again, putting an end to any hopes of an unlikely Chinese revival in the game.