Barcelona 2018 Will Have an Innovative Medal Design

LEN has just unveiled the medals for the 33rd LEN European Water Polo Championships in Barcelona 2018. The medals will be made of acrylic glass and steel and will represent a water polo ball in the water.

The unveiling happened this afternoon in an event held at the Allianz Tower Auditorium in Barcelona, in front of the members of the Organizing Committee and the General Manager of the main event partner – Cristina del Ama.

The presentation was conducted by Barcelona 2018 Ambassador Jennifer Pareja and attended by the President of the Organizing Committee, Fernando Carpena, and the two Vice-Presidents, Marta Carranza and Enric Bertrán, as well as the Sports Deputy of the Barcelona Deputation, Maite Fandós, and the Deputy Director of the Catalan Sports Council, Oriol Marcé.

Javier Abad, the designer of the medals, considered this commision a “personal challenge” due to his connections with water polo since his daughter and son play the sport. He said that “everyone will be pleased with the design, even though it is different from what we’re used to seeing in sporting events.”

“I am very proud of the outcome,” he declared. “The design represents the exact moment when the ball, one of the most iconic symbols of water polo, gets in contact with water. The top part is made of steel and the bottom is made of acrylic glass.”

The medals will be made by Todotrofero – the company managed by Abad in Ibi, Alicante, which has proven its worth with the design and production of medals for marathon races.

We are looking forward to the Championship which will take place at the Bernat Picornell Pools from 14th to 28th of July, and will feature the top European squads, 16 men’s and 12 women’s. 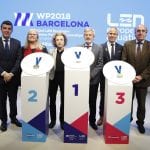 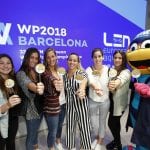 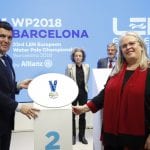 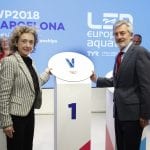 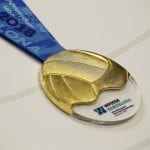