The first round of an unusual season of the 2020/21 Champions League has been completed this evening
The “bubble” tournament of Group B in Budapest was closed with a derby encounter between Barceloneta and Brescia. Barceloneta celebrated an 8:6 win. The margin at the end was only two goals, but there were no thrills in the finish, Barceloneta secured the win in time. The Spanish champion is the only team in this group that collected nine points in three days.

In the other matches of Day 3 in Group B, Ferencvaros easily beat Hannover, while Dinamo defeated Jadran Herceg Novi.

(The first round in Group B was finished yesterday)

Today’s encounter was the first big test for Barceloneta after convincing wins over weaker opponents – Dinamo and Hannover. On the other side, yesterday, Brescia caused the first surprise of the season by defeating Ferencvaros.

Both teams were very cautious in the opening minutes. They concentrated on defense. After the first quarter, Brescia was in front (2:1). Brescia took the lead for the first time in the 14th minute when Alvaro Granados found the net in a 6 on 5  for 3:2, but Maro Jokovic equalized shortly after. Still, the Catalan giant entered the second half leading because Alberto Munarriz converted a man-up for 4:3 with 16 seconds to play in the second period.
Barceloneta opened the third period excellently. In the early phase of this quarter, Alberto Munarriz continued his series of goals with two excellent shots from a distance to give the Spaniards a 3-goal lead (6:3). The Italians started making mistakes in the offensive play, and there were a lot of wrong passes. But, goalkeeper Del Luongo kept Brescia’s hopes alive with a few good saves.

Barceloneta’s goalie Daniel Lopez also played excellently today. The defense was one of the keys to success. 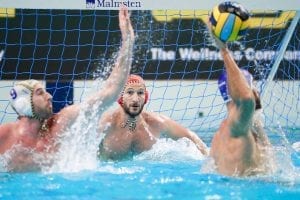 In the 25th minute, Munarriz added one more goal for 7:3. Brescia was without a goal for more than 15 minutes. In the middle of the fourth period, Vlachopoulos broke the silence (4:7). But, two minutes and 37 seconds before the end, Barceloneta regained a 4-goal advantage (Granadost for 8:4), and there was no way back for Brescia.

Alberto Munarriz and the efficiency of the shots with an extra player made the difference. Barceloneta converted four of six man-ups, while Brescia had a low percentage (2/7).

“All credit goes to Dani Lopez, he was instrumental to our win. I’m really happy with my team, they played well in defense and I think we did what we had to in offense too. It’s not easy to beat Brescia so we had to come up with our best. Three wins after a long break in the Champions League, we cannot wish for anymore.”

Asked to compare the win over Ferencvaros and the loss to Barceloneta, Brescia coach Alessandro Bovo said:

“What was the difference between today and yesterday? The answer is Barceloneta, a team with great players, a great coach and great tactics. Their defense was very good, we couldn’t make our shots in the man-ups, they were very well organized in all parts. It wasn’t easy to play three matches in a row, but in general, I’m satisfied with our performance.”

Dinamo Tbilisi recovered from two big losses in the previous two days and recorded its first win in the season. The Georgian side was the better rival for most of the game. The Montenegrins took the lead just once (4:3 in the 16th minute). But, Dinamo answered with four consecutive goals for a 7:4 advantage before the final period. The Montenegrins reduced the gap to one goal (6:7) early in the fourth quarter. Still, shortly after that, Dinamo jumped to a 9:6 lead and didn’t let Jadran come back. 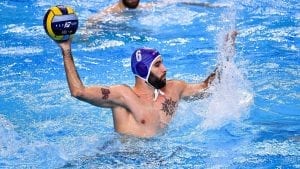 Ferencvaros and Hannover aren’t in the same weight category. Besides, Hannover arrived in Budapest after ten weeks without official matches and was unable to surprise. The European champion achieved the win with ease. Ferencvaros earned a 6:0 lead before the Germans finally found the net. In the end, Ferencvaros improved its goal-difference significantly with a 19:6 win. A 19-year-old Vince Vigvari topped the scorers’ list with four goals. 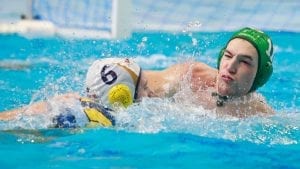 The Champions League will be continued in March, by Round 2 (days 4 – 7). According to the latest information, the next “bubble” tournaments will probably be held in the same venues – Group A in Ostia, and Group B in Budapest.

CHL qualifications: Only one open question