The encounter between Brescia and Ferencvaros was the most important match of the last day of the second Champions League “bubble” in Budapest. The Italians emerged as winners by beating the hosts 9:6. They almost repeated the match played in December when they beat Ferencvaros 10:7.

Barceloneta kept 1st place in the group with a comfortable 14:6 victory over Dinamo Tbilisi.

The tournament was closed by an encounter between Waspo Hannover and Jadran. The German club, led by Montenegrins Radovic, Brguljan,Croat Muslim, Russian Nagaev, collected the points (9:4). This win might be vital in the battle for 4th place in the group and a ticket for the Final Eight (as things stand now, Hannover probably won’t organize the F8 and will lose a spot at the F8 guaranteed for the host)

(Second stage in Group A was finished yesterday) 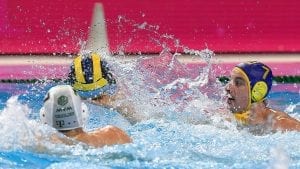 Barceloneta had an easy job in the last round of the second “bubble “. Dinamo and the 2014 European champion aren’t the teams of the same level. The Spanish team kept Dinamo goalless until the middle of the third quarter, while it scored nine goals in the first 20 minutes for a 9:0 lead. Dinamo didn’t surrender. After Dinamo’s first two goals for 2:9, the rest of the game was balanced.
It should be noted that Dinamo played without first goalkeeper Irakli Razmadze, who played well in the previous three days, although he conceded many goals.

In December Brescia defeated Ferencvaros 10:7 at the first “bubble” tournament. Today, the distance between the sides was three goals again.

Brescia controlled the match from the beginning and quickly earned a 3:0 lead (two goals from Jokovic and one from Renzuto). But, Ferencvaros equalized by the first break.

However, the Italian side dominated the third quarter and regained a 3-goal advantage (6:3).

Ferencvaros didn’t manage to come back once more. 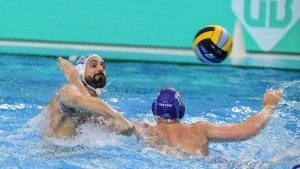 Ferencvaros opened the third quarter with two goals. Marton Vamos sent the ball into the net from a penalty shot in the 22nd minute to cut the deficit (5:6), but Giacomo Canella doubled Brescia’s advantage 30 seconds later, by scoring a goal with a power-play advantage (7:5).

Ferencvaros had a great chance to get back into the game in its first possession in the fourth period. Brescia’s goalie Marco Del Lungo was red-carded because of a foul on Nikola Jaksic (exclusion with the substitution). He punched Ferencvaros’s center-back under the water. The Hungarians had 6 on 5, while Brescia had no goalkeeper. But, Vigvari’s shot went wide.

The hosts paid for that missed opportunity in the next attack. Edoardo di Somma found the net after Jokovic’s assist for 8:5.

In the 29th minute, Vamos converted a man-up for 6:8, but Vlachopoulos replied immediately for 9:6 and the Italians maintained the difference until the final buzzer.

Jadran edged out Hannover 12:11 at the first “bubble” tournament.

But a lot changed in the meantime. Hannover has improved its shape since December. On the other side, Jadran arrived in Budapest without a few key players. Besides, head coach Petar Radanovic couldn’t count on a goalkeeper Petar Tesanovic today (he has tested positive for COVID this morning).

Hannover dictated the pace in the first half of a very defensive battle. Jadran leveled twice (1:1, 2:2), but midway through the second period, Waspo built a 2-goal advantage (4:2).

After a few missed chances on both sides of the pool, the first goal in the second half was scored in the 21st minute, Darko Brguljan gave Hannover a 3-goal lead (5:2), but a 17-year-old Vasilije Radovic answered for 3:5
Two minutes before the last break, Jadran missed a man-up to cut the deficit to one. After that missed chance, Hannover’s captain Aleksandar Radovic, who started playing water polo in Jadran, scored two goals from a distance (both from the same position) and broke the resistance of his former club. Hannover jumped to a 7:3 lead. A four-goal distance is a big lead, especially in low-scoring games like this one was. 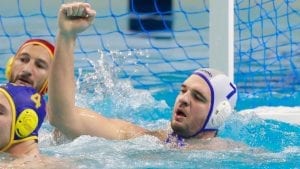 Jadran made a lot of mistakes in the attack, Hannover’s goalkeeper Moritz Schenkel did a good job. Early in the fourth quarter, Waspo made a 6-goal difference (9:3) and everything was decided.