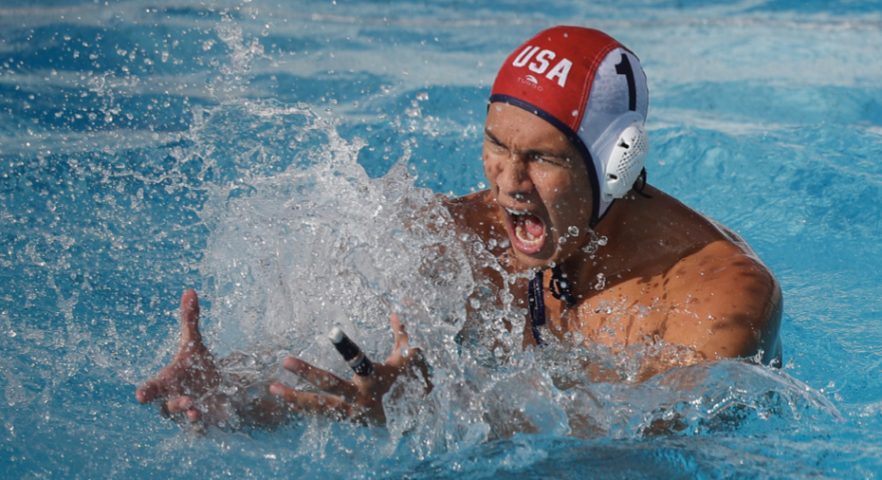 The Finals of the NCAA water polo tournament concluded today at the Spieker aquatic center on the campus of UCLA. The top seeded USC Trojans took on 2nd seeded Cal Bears for the 2021 championship.
The match started with both teams trading possession early, but USC’s Daube was able to find the back of the net for USC’s first goal. USC’s Mercep was able to convert shortly after that to raise the USC lead to 2. Cal was able to quickly answer with three consecutive goals. Five meter penalty goal by Casabella, a strong inside move my Avakian, and a 6 on 5 conversion by Deely. The first period ended with Cal holding a 3-2 lead over USC.
The second period continued with early strong defense by both teams. USC’s Molthen scored with a lob shot as the shot clock was expiring to even things up. Cal quickly answered on a inside power move by Papanikolaou to put Cal back up by one. USC’s McGuire converted on a quick catch and release shot to tie the score,  Molthen then struck again for USC on a nifty cross cage shot that put USC back into the lead by 1, USC 5 Cal 4. Cal was awarded a 5 meter penalty, Casabella converted and we were deadlocked again at 5. Molthen got his third goal of the match, and USC went back up by 1. Cal answered back with a quick exclusion on the next possession, Valera converted, and things were even again at 6. The 1st half ended with the teams deadlocked at 6.
Papanikolou scored early in the 3rd period at even strength to give Cal the lead back 7-6 . After trading possessions, USC Sturtevant scored to tie things up at 7. USC’s Daube scored on a beautify no-look skip shot, and the USC Trojans were back up by 1. Daube struck again and the USC squad was back up by 2. But Cal would not let USC go for three in a row, Casabella scored again for Cal, and the lead was reduced back to 1. Both teams missed on their next possessions.  Cal found the back of the net next on a Valera goal, and the match was tied again at 9. The 3rd quarter ended with the teams deadlocked at 9.
In the fourth, USC got a goal by Barker to up by one, Casabella answered for Cal to tie the game. USC’s Baker struck again to regain the lead for USC at 11 to 10 with 3 minutes left in the game. Cal earned a power play on their next possession, Valera converted to bring Cal back to even at 11. The teams traded goals on their next possession to stay even at 12. Cal then drew a critical exclusion to go up on the man advantage with just :28 seconds left in the game.  Delagrammatikas converted and Cal was back up by 1. USC got a late power play opportunity, but Papanikolaou made a great block, and the Cal bears won a very competitive championship game 13-12.
USC 12:13 Cal ( 2-3, 4-3, 3-3, 3-4 )
USC: Molthen 3, Daube 3, Barker 2, Strurevant 1, Ehrhardt 1, Mercep 1, McGuire 1
Cal: Casabella 4, Valera 3, Papanikolaou 2, Deely 2, Delagrammatikas 1