Champions League 2018 – Venue of the Final Eight presented in Genoa 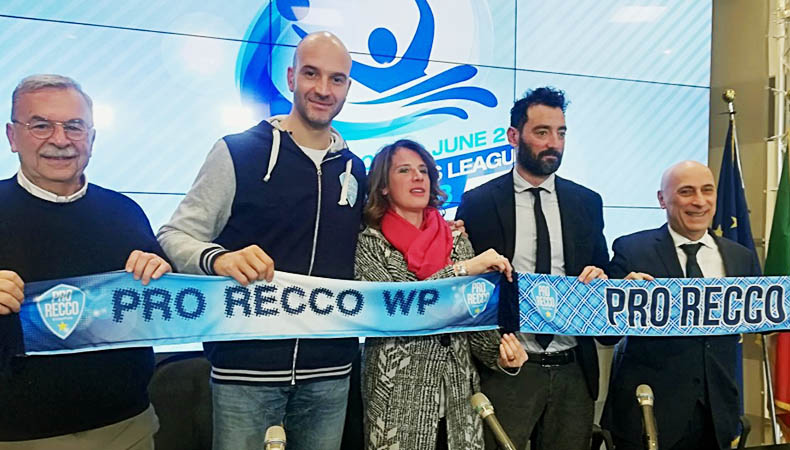 Piscine Sciorba, venue of the Champions League Final Eight, has been presented at a press conference in Genoa, host city of the season’s greatest water polo club competition showcase.

For the first time, the Champions League season will culminate in a Final Eight tournament on 7-9 June. On this historical occasion, Piscine Sciorba will welcome back the best teams of the continent after 15 years – back in 2013 host side Recco beat then arch-rival Honved (HUN) 9-4 with a stunning 5-0 second half to claim the trophy after twenty years. Five more followed since making Recco the most successful club in the Champions League history and the Italians are ready to go for the ninth win this summer.

In his message, LEN President Paolo Barelli highlighted the importance of the series and the finals. “The newly shaped Champions League is one of the most remarkable chapters in LEN’s current success story. We’ve transformed this competition into a premium brand, it’s truly the best water polo club competition in the entire world. Champions League is the only event in water polo which offers a dedicated live scoring application, free live streaming of each and every game and highlights being available for everyone just minutes after the conclusion of each match.”

The LEN President added: “The expansion to involve sixteen teams in the main round and to stage a Final Eight tournament has been the next step to reach an even higher level, to promote Champions League and water polo throughout Europe and gain an even more significant share in the sports market. I’m convinced that the Final Eight in Genoa will be an outstanding event and a great coronation of the entire season.”

While staging the event the club of Recco can rely on the strong and committed support of the Liguria Region and the Municipality of Genoa, promoters of the event, who were presented at a press conference in the “Transparency Room” of the Region.

As it has been revealed, in the event the roof of the pool will be open and with additional stands its capacity will be enlarged to accommodate 2,500 spectators. Twelve top-level matches in three days embody a great programme alone but a village of sports adventures shall also be created around the complex welcoming teams, officials, fans and members of the media.

The complex will also host the “Kids Final”, an already traditional youth tournament with teams from all over Europe that will replicate, in miniature, the challenges of the big one. Young water polo players shall have a unique opportunity to breathe the magical atmosphere of the main competition and to meet their idols.

“The Final Eight of Genoa is the result of a journey started two years ago” Recco President and five-time Champions League winner Maurizio Felugo said. “We want to repay the affection and enthusiasm received in Genoa with a fantastic international event and I’m sure the people of Liguria will feel themselves protagonists of this great spectacle. We deliver our job with pride and desire to amaze Europe. We will double the show with the Kids Final that perfectly embodies our values and goals: bringing the youngest children closer to this sport, making them participate and excite to feel the passion. First as an athlete then as a president, I have realized how important it is to team up, help each other and collaborate. For this reason, I would like to thank Liguria Region, Municipality of Genoa and My Sport – Piscine Sciorba’s managing company – who will play this match alongside us and also for LEN the trust placed in us.”