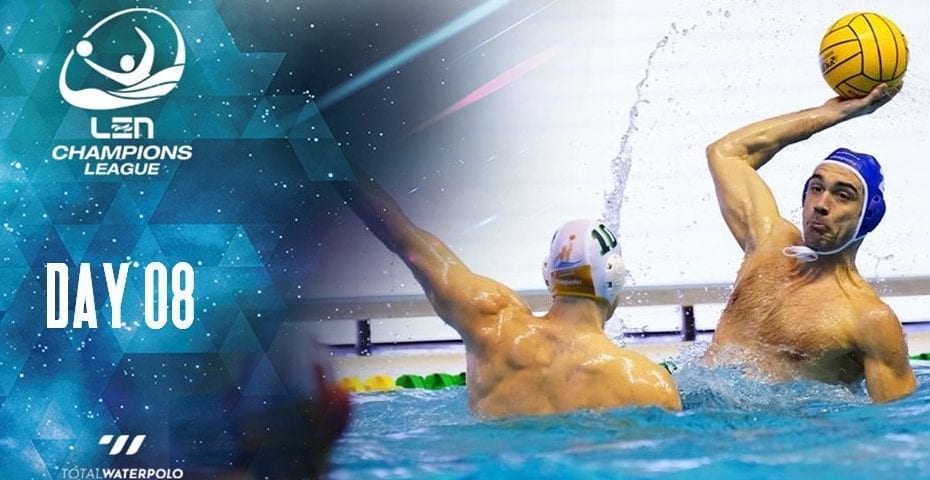 Just nine days after the end of the spectacular European Championships, the water polo fans in Budapest enjoyed a new great match. Two local rivals – Ferencvaros and OSC – faced off in the derby of the 8th round of the Champions League in Group B. OSC recorded an 11:8 win, which means that European champion Ferencvaros suffered the first loss after an unbeaten run that lasted almost ten months.

The other three matches of Day 8 in Group B were also played today: Dinamo Tbilisi – Pro Recco 3:13, Marseille – Mladost 11:14, Terrassa – Hannover 11:10. The matches of Group A are scheduled for Wednesday.

OSC and Ferencvaros clashed in the last game of the Champions League in 2019. The two Budapest-based rivals shared the points in the 7th round (10:10), in the match played in OSC’s pool on December 14th. Since the Champions League calendar is like a mirror, the two big rivals met again in the opening round of the second half of the group stage. This time, Ferencvaros was a host.
OSC had a 2:0 and a 3:1 lead in the first half. Deep into the second period, Ferencvaros managed to level the score – 3:3, while Montenegro’s captain Drasko Brguljan put OSC in front again, with a beautiful lob 36 seconds before the end of the second quarter – 4:3.

The hosts netted three unanswered goals in the third quarter. Denes Varga equalized from a penalty in th1 8th minute, and he gave his team the first lead in the middle of the period. Mezei converted a man-up to double Ferencvaros’s advantage -6:4 two minutes and 15 seconds before the last break. It seemed that the European champions took control. But, they scored just one goal in the next eight minutes, while OSC netted six, and that proved vital for the visitors’ victory.

OSC closed the third period with two goals in the last two minutes – 6:6. The visiting team continued its series and went 8:6 up in the 27th minute. Quickly after that, Ferencvaros cut the deficit (7:8). OSC responded with two goals in a span of 41 seconds (Randjelovic and Burian) to earn a 3-goal advantage (10:7) with 02:51 to go and maintained the distance until the end.

This was the European champions’ first loss in all competitions since April 13th, 2019, when they were defeated by Pro Recco, also in Budapest (7:13), on Day 12 of the Champions League.

Mladost defeated Marseille easier than it was expected. The Croatian team secured a victory before the middle break. Marseille scored the first goal in the match, but Mladost answered with four straight goals for a 4:1 lead. In the 16th minute, Mladost earned a 5-goal advantage (9:4). Then Marseille produced a 3:0 run and the hosts trailed 7:9 in the 18th minute. But, in the remaining time, Mladost controlled the match. The visitors’ advantage was never smaller than two goals.

Mladost’s goalkeeper Ivan Marcelic scored the last goal in the match. Milos Scepanovic, the goalie of the French team, joined his teammates in the attack 30 seconds from the end. But that effort didn’t give a result that Marseille hoped for. Marcelic saved the shot from Crousillat and then sent the ball into Marseille’s unguarded goal from a long-distance shot, over the whole field.

Pro Recco easily defeated Dinamo. The Italians built 5:0 lead in the first ten minutes. By the end, Recco stretched the margin to ten.

The encounter between Terrassa and Hannover was very similar to the clash of these two teams in Germany, on Day 7. And the outcome was the same. Terrassa again celebrated a minimal win (in December, the Spaniards recorded a 9:8 win in Hannover).

The rivals were in a neck-and-neck race. Hannover entered the last quarter with a 7:6 advantage. In the middle of the fourth period, Terrassa went ahead (9:8 and 10:9), and Hannover equalized on both occasions. But, the Germans had no response after Sanahuja converted a man-up for 11:10 with 78 seconds to go and Terrassa collected all three points