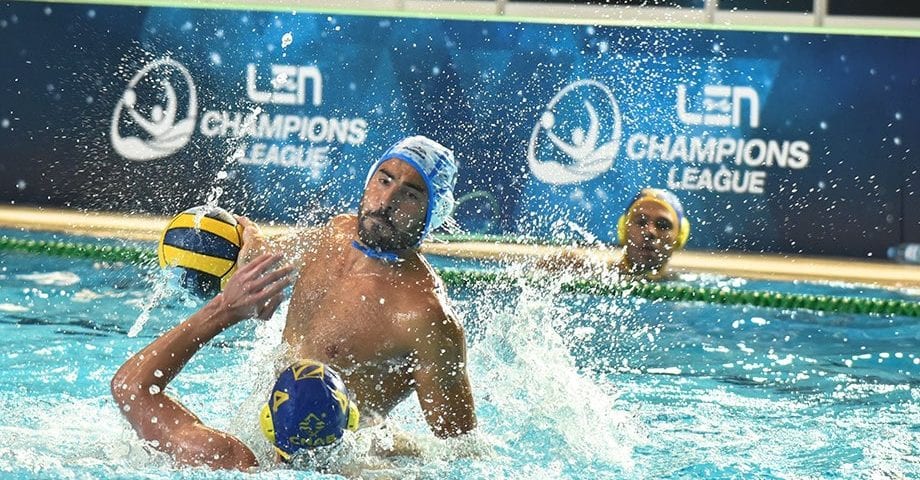 Pro Recco and Ferencvaros, the winners of their respective groups of the Champions League Preliminary Stage, will play tomorrow in the final of the best competition for clubs in the world.

Both games were very interesting. The duel between Pro Recco and Barceloneta offered a lot of twists and turns, but Recco secured a win in time and avoided a thrilling finish. Ferencvaros was in front for most of the time of the match against Brescia. The Italians were four goals down in the first quarter Still, Brescia was able to come back and wasn’t far from a win. The winner was decided in the final 20 seconds of the match.

Ferencvaros has won one title of the European champion so far and will have a chance to defend the trophy, won in the last completed season (2018/19). Pro Recco, the eight-time European champion, returns to the final after three years and a 7:9 defeat to Olympiacos in the final in Genoa. But the Italians have been waiting for their 9th Champions League trophy since 2015.

Barceloneta displayed a brilliant water polo yesterday in the quarters against Olympiacos (22:9). The Spaniards kept that momentum in the semifinals, but only until the middle break. Recco took control in the third period and secured the spot in the gold-medal match.
Thirteen goals were scored in the first two quarters, there were a few turns, but Barceloneta dictated the pace for most of the first half.
Pro Recco had an early lead (1:0, 2:1), but Barceloneta scored three action goals in less than two minutes (Fernandez, Granados from a counter-attack, and Fernandez again) and went in front (4:2). 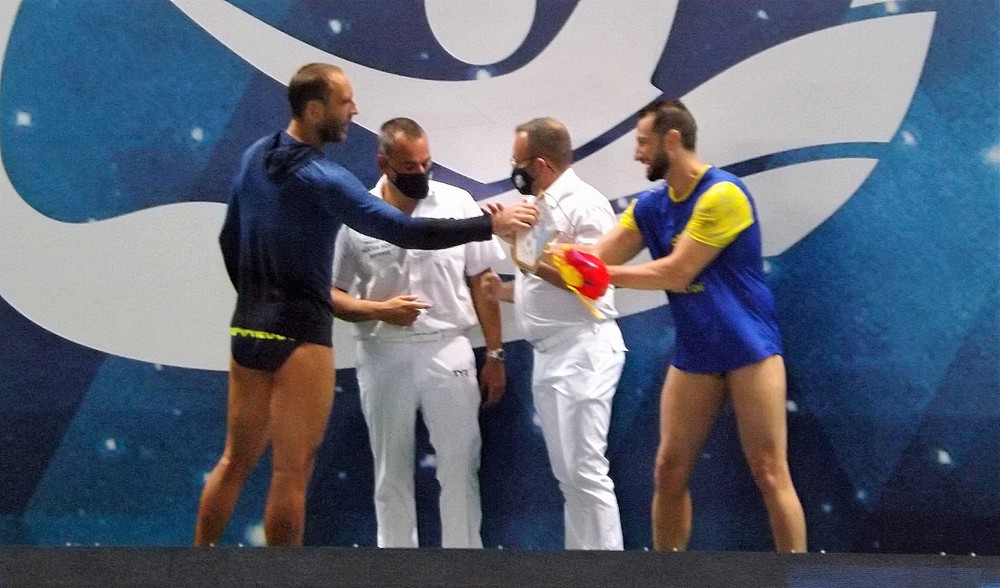 .Pro Recco responded with a 3:0 series. Figlioli opened the second period. Mandic added two goals (one with a man up and the other from a penalty), and Recco earned a 5:4 advantage. Barceloneta responded with three goals in a row. Perrone converted a double man-up, Granados scored from a penalty, while Aleksic netted a nice goal from a distance and Barceloneta regained a 2-goal advantage (7:5) 59 seconds before the end of the second period. Echenique halved a distance (6:7) 29 seconds after Aleksic’s goal.

Barceloneta’s very good offensive play disappeared after the middle break. The Spaniards missed a lot of chances They wasted a few man-ups. Recco’s defense worked well, while the Italians extended the series of goals, that was started by Echenique in the 16th minute. Benjamin Hallock scored from an extra in the 23rd minute and Recco had a 2-goal advantage for the first time (9:7). After four consecutive goals by Pro Recco, Larumbe scored for 8:9, but Francesco Di Fulvio beat the buzzer. A second before the last break, he found the net from the left-wing, and the Italians were two goals ahead again (10:8).

In the 29th minute, Figlioli gave Recco a 12:9 advantage. Shortly after that goal, Pro Recco had a chance to close the contest. Aicardi stole the ball in Barceloneta’s half of the field, he started a counter-attack, but his shot was blocked by Dani Lopez. It happened two and a half minutes before the end. On the other side of the pool, Mallarach converted a man-up (10:12) and kept Barceloneta’s hopes alive, but not for long. Everything was clear  43 seconds from the end when Munarriz missed with a man-up.

“The team came to this match with a lot of ambitions and played really well, with the right way, with self-­‐discipline and a good approach. Our defence was really good, especially in the second half and that was the key for our win.”

“I’m proud of my team, they were giving their best today but Recco won the game and we have to congratulate them. We had a very good first half, but it was hard to play against their really aggressive defence in the second. This is Recco, we know this, they always play on the limit of exclusions and it’s really hard to stay calm under such pressure. For me, water polo means something different but this is sport, we have to accept the result and prepare for the bronze medal match.”

Ferencvaros dominated the first quarter, and it stunned Brescia with a 4:0 lead. But, the Italian champion recovered from an opening shock quickly. They produced a 4:1 run in the first four minutes of the second quarter and cut the deficit to one (4:5). The title-holder managed to build a 3-goal lead (8:5) in the 14th minute, but Brescia retook control. The Italians scored three goals in a row to equalize – 8:8 (19th minute). Ferencvaros managed to build an 11:9 advantage, but Brescia caught up with the Hungarians (11:11) three seconds before the last break, when Dolce scored a goal with a power-play advantage.

After 22 goals in the first three quarters, the defenses dominated in the final eight minutes. Denes Varga scored his fourth goal in the 26th minute, and Ferencvaros was in front again (12:11). In the following minutes, both teams missed a few good chances. A minute and 54 seconds before the final buzzer, Dolce scored with an extra player, and Brescia equalized for the third time – 12:12. 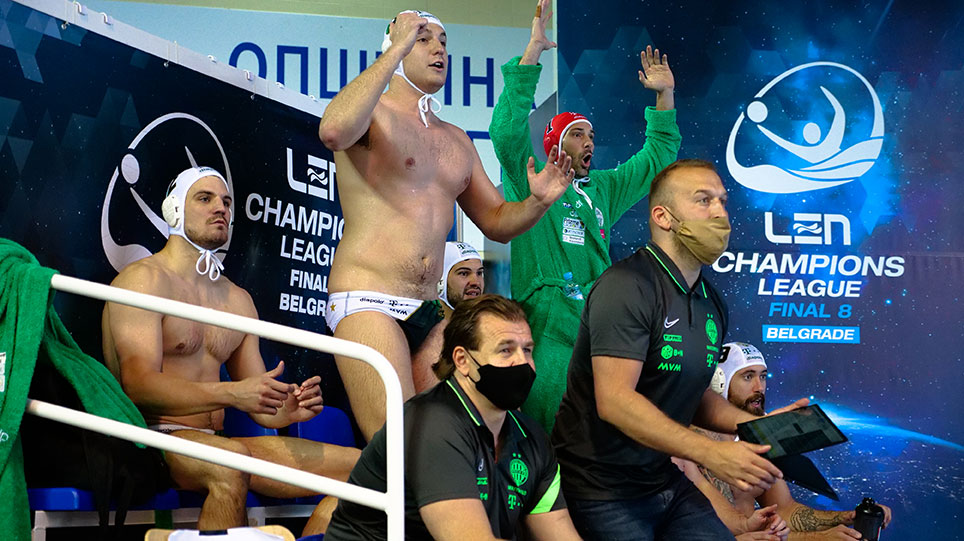 In the final minute, the Italians had a great chance to finally took the lead. They earned a man-up with 69 seconds to go. But, that attack finished with a wrong pass, and Brescia paid for the mistake. Just 21 seconds from the end, Ferencvaros’ center-forward Constantin Bicari found the net for 13:12. After that, Brescia’s coach Alessandro Bovo called a time out and prepared a 7 on 6 attack (goalkeeper Marco Del Lungo helped his teammates in front of the Hungarians’ goal). But, nine seconds from the end, Vlachopoulos hit the post and Ferencvaros secured the win. In the last second of the match, Vamos sent the ball into the unguarded net to set the final score 14:12.

Zsolt Varga, Ferencvaros, said that the game with Brescia had been very tough:

“I can say that we’ve played the toughest game of the season if not the toughest ever in the Champions League. Brescia is an amazing team, it really had everything in hand for the season, a true favorite for the title, which they had proved by beating Recco in the Italian final.”

Brescia beat Ferencvaros twice in the preliminary stage (9:6 and 10:7)

“We lost to them twice in the prelims but we were never complete in those games – that was one of the main differences that we had everyone on board for this match. We also had to deal with their extremely challenging playing style, their drives, their aggressive attacking approach are pretty hard to handle but we could withstand the pressure for most of the time, however, they still scored 12 goals which showed their quality. We had a great start but leading 4-­‐0 after a period may mean nothing as you concede two and the game is open again, what just happened here. I think it was all about our outstanding self-­‐ discipline, playing tough when it was needed and the ability to stay composed even in the most tense moments – that gave us this fantastic win.”, Varga said.

“We started badly but soon we came back and started to play our game. We made mistakes in defence but we did our best in the offence. Ferencvaros also played great, little things decided the result. I feel sorry to my players as they really did their best today.”