Olympiacos is back to the Olympos after 14 years

Though Recco was ready to further improve its record of 8 titles in the Champions League, Olympiacos’s game plan worked perfectly and that ruined the Italians’ party in front of 2,500 fans in Genoa. 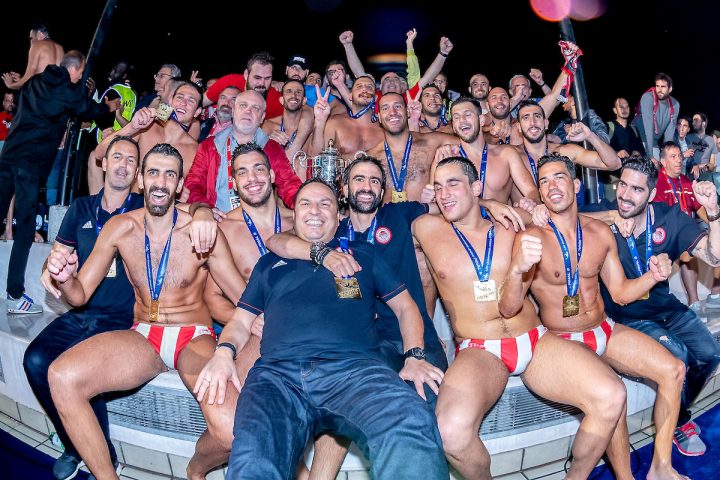 It turned out to be Recco – the home team never led in the final, the style of the match favored the Greeks for most of the time. The most crucial phase came around the middle break: Filip Filipovic’s ball Pavic’s head from a penalty which would have given Recco a 4-5 lead just before the middle break. Instead, Olympiacos opened the second half with a couple of stunning shots from the distance in 40 seconds for a 6 4 lead which led to the substitution of veteran goalie Stefano Tempesti. Recco overcame its problems and climbed back to 6-6, however, the Greeks were very composed in man-ups and after a rare miss, they converted their 6 on 5 in the most important moment, 47 seconds before the last break for a 7-6 lead.

In the fourth they marched on, Ioannis Fountoulis was on target twice, he netted 4 in this match and the Greeks were 9-6 up with 4:11 to go. Recco pulled one back but couldn’t score anymore as Pavic delivered one save after the other. The Croatian Olympic champion finished the game with an astonishing 68.4% saving percentage. He posted 70+ percentages in the previous two games so he was rightfully named the MVP of the Final Eight. 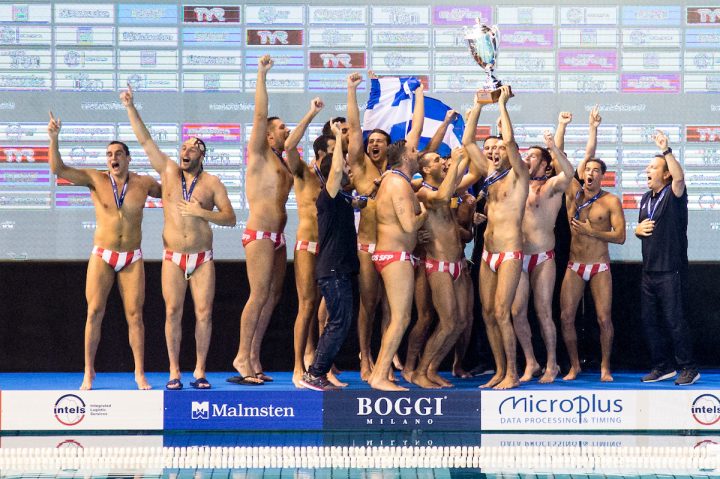 This was the Greeks’ second Champions League title after 2002 – in fact, they are master in defeating the home teams as they beat Honved (HUN) 14 years ago in Budapest. The 13th final didn’t bring luck to Recco, after 7 wins in classical final matches this was their 6th defeat (their first title was clinched in a round-robin tournament).

As for the other placements, Barceloneta was much fresher than Jug in the bronze medal match and upended the Croats with ease (14-8). Szolnok also did a clean job while beating fellow Hungarian Eger for the 5th place (10-6) while Brescia (ITA) claimed the 7th place after downing Spandau (GER) 14-10 in a match which saw a 4min expulsion apiece for brutality.

LEN’s premium club water polo competition will return in the same format next year – the Final Eight tournament will be staged in Hannover (GER).

Unfortunately, we didn’t have time to recover physically or mentally for a match like this. Barceloneta completely declassed us in every segment of the match. They deserved to win the bronze. We weren’t as good as yesterday, as you could see in the pool. I’m sorry that we finished our season this way, but I think that over the year, we made a season we can be proud of. Once again, we were among the best four teams in Europe and that is a big result for us.

I think the game wasn’t easy because it wasn’t the game we wanted to play. Both teams were really tired and we both lost yesterday, so our rhythm in the match wasn’t the same as before. We are happy that we were in the competition and it’s always nice to know what we came for. We took the bronze medal and the team is happy for we did make it to the best four in the Final Eight. Considering how the groups went, I think we did a good job winning the bronze. Due to the fact that we weren’t in the Final Eight before, it’s a big step for us.

As for our entire season, we achieved all the goals we wanted to accomplish. I’m not completely satisfied because yesterday we wanted more. We had the obligation to win the Spanish League, so we wanted to win the Final Eight as well.

This is the second best win of my life — the first one is my newborn daughter. I was sure we will win the title. There was no solo play — we played as a team. It wasn’t important who scored the goals and I don’t even remember. All I remember is us getting the title.

Both sides missed a man-up at the beginning then Olympiacos opened the scoring when Paulo Obradovic blasted the ball from the back of the head of Stefan Tempesti to convert a 6 on 5. The equalizer came soon, Dusan Mandic, who struggled with his shots in the previous two games, now managed to net his first of the weekend from a fine action shot. Olympiacos made its following man-up too, this time the other Croat, Andro Buslje dunked the ball in from close range for 2-1, with 42 seconds before the first break.

The Greeks missed a great chance to double their lead when their top scorer Konstantinos Genidounias couldn’t put away the ball from a 6 on 4 (his shot was well blocked). Recco made the simple man-up at the other end, Guillermo Molina tipped the ball in from close, with his left (though he is right-handed). 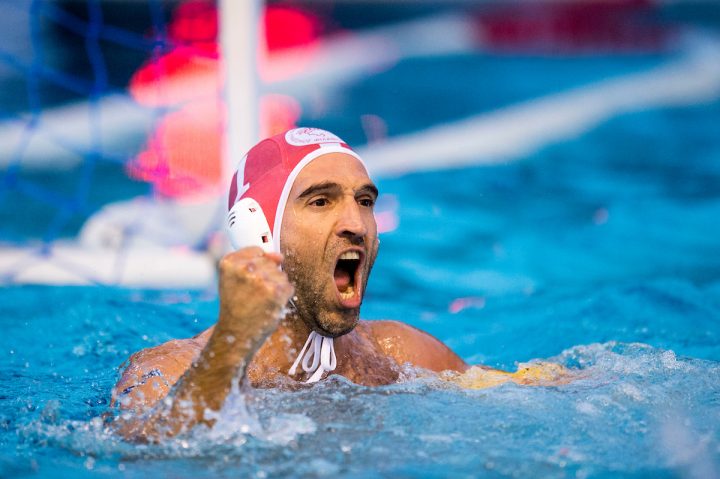 The Greeks remained composed in man-ups, Alexandros Gounas netted one after a time-out but Alexandar Ivovic copied Mandic’s goal to make it 3-3, but Olympiacos buried its 4th man-up in a row, this time Ioannis Fountoulis’ precise shot found the back of the net. On the contrary, Recco missed back-to-back 6 on 5s, Pavic made a tremendous save in the second but he couldn’t have a hand on Francesco di Fulvio’s shot which brought the sides back to even once more at 4-4. Recco could have gone ahead but Filipovic hit Pavic on his head from a penalty.

The Greeks began the second period in a stunning mood, in 40 seconds Fountoulis, then Dervisis sent a bouncing shot from the right-back position to the net, gaining a 6-4 lead and forcing Vlado Vujasinovic to substitute his veteran goalie Stefano Tempesti. Di Fulvio brought back life to the packed stands by converting a man-up then Olympiacos missed its 6 on 5, the first one since ages…, but Pavic did his job in their goal, he stopped Echenique’s one on one, then Bodegas’ close-range shot from a man-up. Still, the Greek attacks lacked the dynamism at this stage and soon it was equal again, as Jacopo Alesiani scored a brilliant counter-attack goal (6-6). Credit goes to the Greeks that they could stay calm and Genidounias found his better shots in the best moment, 47 seconds before the last break to give the lead back to his team at 7-6.

Recco missed a crucial extra at the beginning of the fourth, Pavic posted his 12th save in the game, while Olympiacos was back to normal as Fountoulis blast did the harm from the following 6 on 5. And the Greek master-shooter deepened Recco’s trouble as he was on target for the 4th time in the evening and made it 9-6 with 4:11 to go. Nerves seemed to rake over at the Italian side as they lost the ball in a 6 on 5 in an unprofessional way – the next one was in, though Pavic almost stopped Echenique’s shot the ball just crossed the line with 2:39 remaining on the clock. The Greeks wished nothing else just killing the time in attack, in the back Pavic took care of the rest. He finished the game with 15 saves on 22 shots, keeping his percentage over 70% for the three days – no one argued that he was named the Most Valuable Player of the Final Eight.

The game was virtually decided in the first period: Jug, exhausted from the previous two day’s physical battles against title-holder Szolnok and record-holder Recco, couldn’t take on the speed of the Barceloneta players. The Spaniards rushed to a 4-0 lead in a span of 3:37 minutes in the opening period and still held a 6-2 lead late in the second. However, Jug found some extra gear and pulled two back before the middle break and came even closer in the third at 6-5. 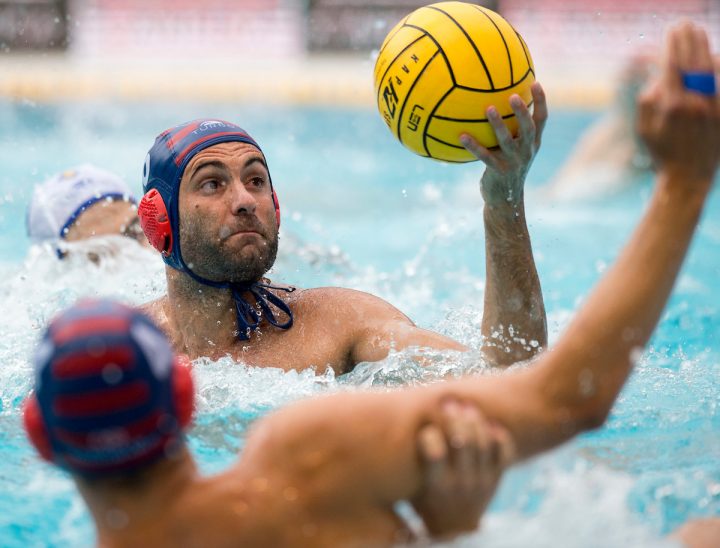 But it turned out that this was just a short-lived comeback as Barceloneta quickly replied from a 6 on 4 and in 49 seconds they netted an action goal for 8-5. Soon it was over: after 9-6 the Spaniards quickly scored three from as many possession, again like a whirlwind, in 96 seconds, making it 12-6. The fourth period lacked the usual tensions, the reserve goalies came in and a couple of young players could also enjoy longer playing periods.

It took some time before the two Hungarian sides arrived really to this match. It was their 9th clash in the season – their head-to-head stood at 4-4 before this game – and it was a bit hard for them to find the motivation as neither of them came to Genoa to play for the 5 th place (last May they clashed in the semis). 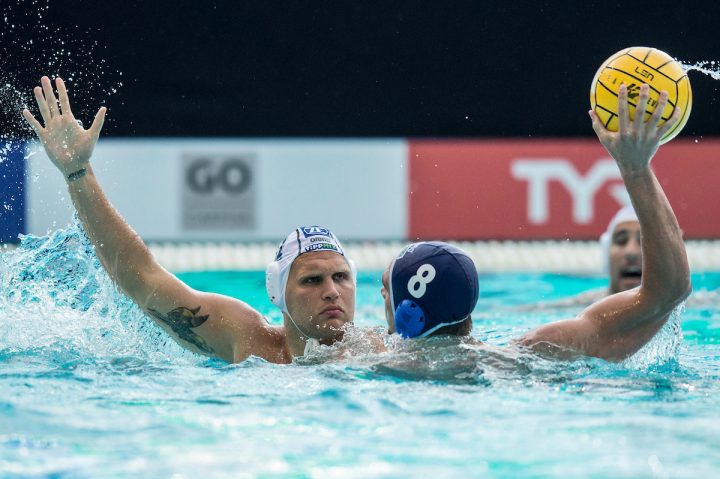 Eger woke up earlier, scored the only goal of the opening period, then made it too soon in the second while their goalie Branislav Mitrovic delivered one save after the other. Szolnok needed 12:13 minutes to get on the scoreboard, managed to equalize by halftime and started rolling in the second half. Milos Cuk and Aaron Younger found the way to beat Mitrovic and they did that a couple of times, giving the title-holder a 4-6 lead before the last period.

Though Eger pulled one back early in the fourth, at 5-6 Szolnok scored two great action goals in 44 seconds and from there was no way back for the local rival. Though a minor piece of history was worth being recorded: a great family tradition was enriched by another chapter, two years after the legendary Hungarian triple Olympic champion Peter Biros called it a day, another Biros, Barnabas, his cousin left his mark in the sport by netting his first goal in the Champions League Final Eight, though it didn’t help Eger to come closer towards the end of the match.

For a while Spandau seemed to keep the match under control – at the beginning, they led 4-1 and later, when the weekend’s first 4-minute expulsion was called for brutality and the Germans could play in man-up for that period of time. However, after Lucas Gielen put away the penalty after the red card, Spandau could score only one goal during the 4-minute long extra man. 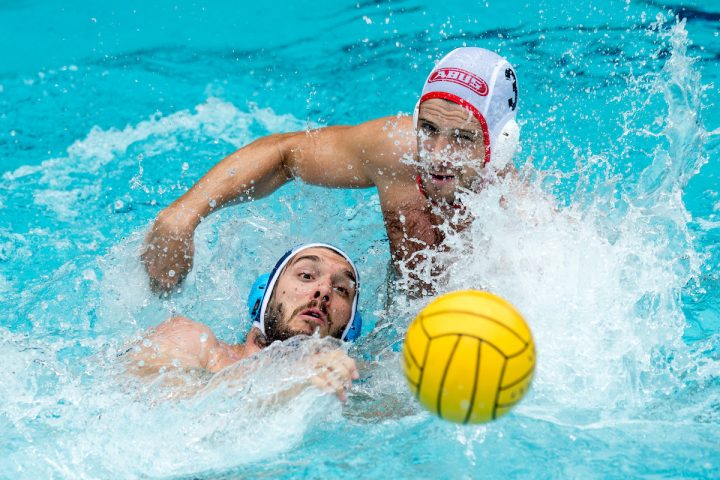 So Brescia trailed by three when it ended, Valerio Rizzo scored immediately for 8-6 after his team was back to full strength, then came the big turning point, when Remi Saudadier was also expelled for 4min from Spandau. And Brescia made the most of this advantage, they won this part 5-0 (Spandau had 2-0) and this was enough to clinch the win as Spandau didn’t have the reserves to bridge the gap after 8-11.

The last minute turned into a kind of scoring festival, three goals were netted in 36 minutes, the most spectacular one came from Christian Presciutti, who stole the ball over the halfway line after the goalie’s bad pass and sent it back from 18m to the empty net. 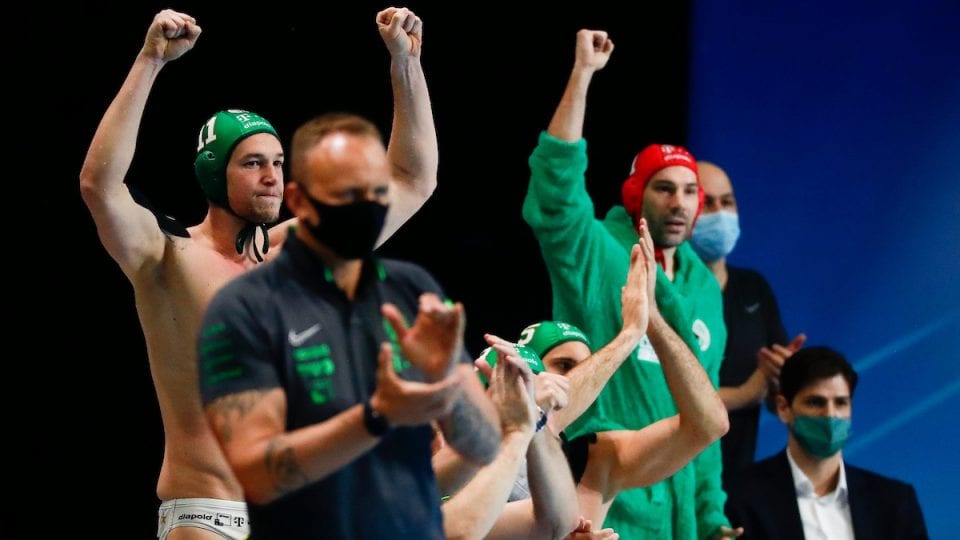 Ferencvaros keeps 1st place in Group B, next stop is Belgrade