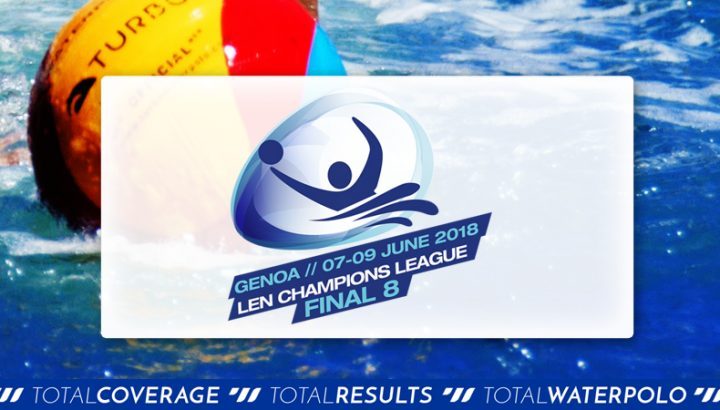 Six of the eight competing sides are already in the history book by winning the most prestigious trophy at least once, though host Pro Recco is targeting a record 9th triumph in the Final Eight tournament in Genoa. LEN offers €381,000 in prize money for the world’s best clubs, the winner will cash in €52,000.

The next three days will see the best eight clubs of the world going for the title, featuring the greatest stars of present-day water polo. The quarterfinals on Thursday promise brilliant clashes already. Just as last year, the final of the previous season shall be replayed in the quarters as 4-time Jug Dubrovnik (CRO) and title-holder Szolnok (HUN) will have another face-off (last May Jug clashed with Olympiacos as a rematch of 2016 final). Both teams, reshaped after last season, had ups and downs in the prelims, and here only one can continue the quest for glory.

The in-house battle of Italy, between 8-time winner Recco and Brescia, will offer another exciting chapter of the two sides’ rich history. Recco beat Brescia 7-5 in the Italian league final for the 4th time this season a week ago, however, it’s Brescia which managed to beat Recco for the last time in Italy, though it happened a year ago, last May (that ended Recco’s all-Italian record of unbeaten runs, halted at 73 matches).

For the first time, a Final Eight tournament is to be contested in the Champions League.

After missing last year’s F6, 2014 winner Barceloneta (ESP) is back but they face a tough team, Eger (HUN). Both teams had a sluggish start but a brilliant 7-game winning run from both in the middle of the season secured the qualification for them. 2002 champion and 2016 runner-up Olympiacos (GRE) is one of the top favorites and their first match seems to be an easy one against Spandau (GER) as the Germans are not the same as they were in the 80s when they clinched the trophy for four times. Still, Spandau claimed a couple of big wins in this season, beat title-holder Szolnok and Eger and lost narrowly to Recco, so on a given day they can be a threat to anyone.

For the first time, a Final Eight tournament is to be contested in the Champions League. After the round-robin finals with four teams in the first decades, then the clashes played on a home-and-away basis, LEN introduced the Final Four format in 1997 and switched to Final Six in 2014. As the Champions League hit unprecedented heights recently, there was a need for further expansion, thus a 16-team preliminary was staged which turned out to be an instant success. 2080 goals were scored in the main round, 24.76 goals per game average, guaranteeing outstanding entertainment for the water polo fans.

“I’m basically happy with my team in this season but I think we will need an even better performance in the next three days. We played well so far, I think we are ready for this tournament but we are to take only one step at one time so we are focusing only for the game against Spandau.”

“The first game is the most important one from some aspects so we are really excited to play with Eger which is a really great team. The team is ready, all our players are in good shape, we don’t have any problems and our plan is in place to beat our Hungarian rival.”

“We made the semi-finals last year and we want to repeat this once again. Barceloneta is a fantastic team, they had some great games this season. It’s no secret that half of our team is about to leave and I hope that this last occasion when we are together, will mean an extra motivation for our players.”

“This season brought us ups and downs but that was somewhat expected as five quality players left our team. In fact, before the season we did not even expect to be here but we managed to reach a level which allowed us to qualify for the finals once more. However, we’ve already made our target, won three trophies at home and made the Final Eight – whatever comes after this, is a great present for us. One thing is for sure: these players are really exhausted as most of them had to play more games then ever before, more Champions League matches, more national team matches.”

“After losing two players like Marton Vamos and Denes Varga in the summer, we knew that this season would not be the same as the previous one had been. However, the first part was really successful so it seemed we could go on like in the previous years, but later our level dropped and we started losing important games. Still, we could bounce back a bit, but as Vjekoslav mentioned, this season was really hard, too many games the players had, so they couldn’t work enough to be in a good shape for a longer period. We lost the home finals which wasn’t the best thing happened to us, but we had ten days to recover and to get ready for this tournament.”

“Though everyone expects us to win this tournament – this is a sport so any team can come first here. Of course, we want to go all the way but there are other teams as well. And this first game against Brescia is a really hard one.”

“Tomorrow we will play with the best team in the world. We met four times in this season and they beat us every time. Still, we try do our best, during one game anything can happen.”

“Though we could beat Brescia four times, we approach every occasion as the first one, without thinking of the previous one. This can be the only way to prepare for this game. Of course, we want to win the trophy but we need to give our best to achieve this.”


19:00
Bronze medal game
20:30
Champions League Final
We will be following the Final Eight on social media, so make sure to follow us on Twitter and Facebook.