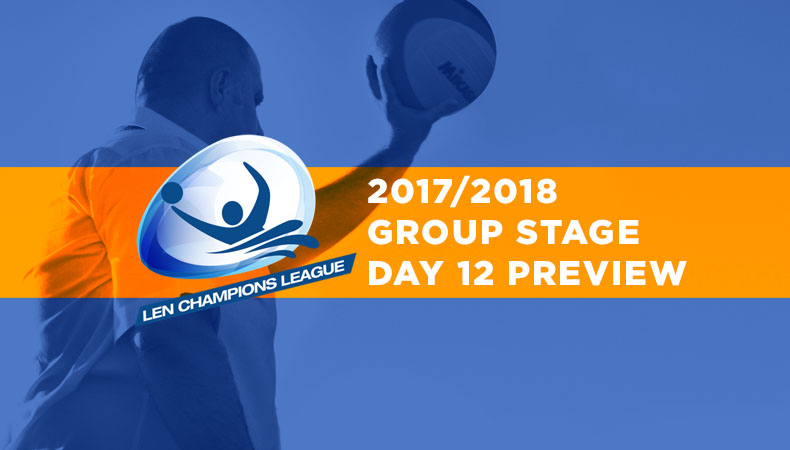 Five-horse races are still on

Any question regarding the expansion of the Champions League has already been answered by this season’s excitements: eleven rounds went and nothing has been really settled for the Final Eight. Both groups enjoy five-horse races for the four available qualifying spots and the hunt in Group A cannot be any more thrilling.

This is going to be a hard day for Brescia (ITA) in Group A as they have to pay a visit to Piraeus where group-leader Olympiacos (GRE) is set to secure its spot in the Final Eight as well as cement its top position. At the same time, the Italians also need a positive result desperately as their fiercest rivals face easy home matches. A loss would almost surely push Brescia back to the fifth place with two rounds to go.

“Against Brescia, we are to take advantage of the strength of our home, by coming up with a very good game. Our mission is particularly difficult against a very strong team. I expect my players playing more freely and more dynamically, eliminating the stress of qualifying to the Final Eight. We are waiting for a full “Papastratio”, as we want our fans to give us pulse and passion for a victory!”

“After the match against OSC, this Wednesday&#39;s game is another final for us. We need to achieve a good result. Olympiacos is a top-level team, practically they are the national team of Greece with three extraordinary foreigners. Nevertheless, we have to gain points and, in the game played in Brescia, we’ve demonstrated we can do it.”

Last year’s runner-up Jug (CRO) has been struggling this season, their loss in Barceloneta ended their three-match winning streak – bouncing back against Hannover (GER) at home is a must for the Croats. They beat the Germans by seven goals on Day 3 so collecting three points might not be a challenge this time either.

“We don’t have space for any calculation. Everything is clear for us. If we want to qualify for the final tournament we need to win all remaining games.”

“Most of our players have a special motivation to play in this pool against Jug. I‘m looking forward to an exciting game, showing a great performance.”

The same applies to Dynamo (RUS) which managed to return to the winning track on Day 11 after three winless games. The Russians play with bottom-ranked Partizan (SRB), a perfect occasion for adding three more points before the last two crucial encounters with Olympiacos and Jug.

“From now every game is important for us. We will try to be ready for one hundred percent.”

“We face Dynamo after an important win against Red Star in the national championship. Because of that, our players are tired, but we won’t surrender easily. One of our best performances in this season’s Champions League was the match against Dynamo in Belgrade. We’ll try to play again on that level.”

Barceloneta (ESP) has a tricky challenge, playing in Budapest against OSC (HUN) seems like an easy job, though the Hungarians have been underperforming the whole season and with the home, playoffs approaching they would definitely love to raise the level of their game. Still, the Spaniards are having a brilliant spell, won six consecutive games and are ready to extend this run to seven.

“Another very good team comes to visit us, there are a lot of very good and skilled players in CNA Barceloneta. For us, each match is a great opportunity to prepare for the rest of the Hungarian Championships. I am expecting an easy-going approach from my team as we want to show a very good match for our supporters.”

“After the last two victories in Moscow and against Jug at home we need three more points to secure our qualification for the Final Eight. OSC is a great rival, they play at home so it’s going to be a very difficult game for us. Still, we target the three points, not less.”

In Group B the picture is a bit clearer but the two matches due in Hungary might shake everything up. Though if both end with the favorites’ win, it would mean that things settle as it was expected, Recco (ITA) and the two Magyar sides finish in the top three positions.

Still, Day 3 results showed that nothing could be taken for granted here. Title-holder Szolnok (HUN) is looking for a revenge for their surprise loss to Spandau (GER), while Eger (HUN) is to secure its qualification against Jadran (MNE). Back in November, their match ended in a stunning 4-4 draw in Herceg Novi, but since then Eger reached for a higher level, won its last six games and another victory would send them through while Jadran would slip to the brink of elimination.

“Spandau has been developing continuously in the past years, which is paying off, as they have defeated several top teams, among those our team as well, and it looks like they are qualifying for the finals. We do not know what shape they are in as of now, as they have not played important matches recently. We most certainly want to take a revenge for our 10-9 defeat from last November. One thing is for sure, we will not have an easy job, I am expecting a tough game but a victory at the end.”

“Three games to go and still nothing to give away. If Szolnok does win on Wednesday afternoon they are almost cleared for the Final Eight. So I do expect a highly concentrated and focused opponent. This season shows how hard it is, even for the top teams like Szolnok, to perform constantly on a high level in the Champions-League. If we are able to play our best water polo and stay on our highest level for four quarters, we are probably able to go for a point. We will try an fight for the best possible result.

“Usually, we are able to play our best water polo when there is a lot at stake. We are in a good mood so why shouldn’t we be able to go for the next surprise? Every game has to be played, everything is possible.”

“Our goal is the victory of course. We would like to go to the Final Eight as the second placed team in the group. So our goal is not only to qualify for the Final but to take the best position too.”

“This game is very important for us as a positive result would keep us in the race for the F8. For sure Eger is the favorite they are playing at home. On the other hand, they almost already secured their spot in Genova. It will be a good game and we will prepare ourselves to give our best.”

“The team is very tired after so many games in this season. Still, we have a strong motive for this game and we will give our best. Eger is an excellent team what they confirmed in the games against Szolnok played in the Champions League.”

F8 host Recco (ITA) should march on in Bucharest against Steaua (ROU) while Alphen (NED) has its last real chance to earn points in its first season as they play with Sabadell (ESP).

“The game with Pro Recco arrives in a delicate moment for us, having a lot of injured players. Despite this, we will try to do our best against maybe the best team in the world at this moment.”

“The game tomorrow is an opportunity to take a step forward on our path of collective growth. We do not have a lot of time before the Final Eight, so every match must be approached with the utmost concentration and determination. We are training hard in these days, but despite the tiredness that could be felt, we are going to use all the games to grow, both technically and tactically. Steaua is a physical team: we will have the opportunity to work on the one-on-ones, respecting what will be the tactical instructions of our coach.”

“We’ve just ended the regular season and are heading towards the playoffs in May. We are looking forward to the game against Sabadell to see if we can repeat the good game we had in Spain but of course with a different ending, a win this time.”

“This Wednesday match is a good opportunity to obtain a good result against an opponent staying in the low zone of the classification. We are really looking forward to offering a good game and through that, we can prepare for our league matches as well.”