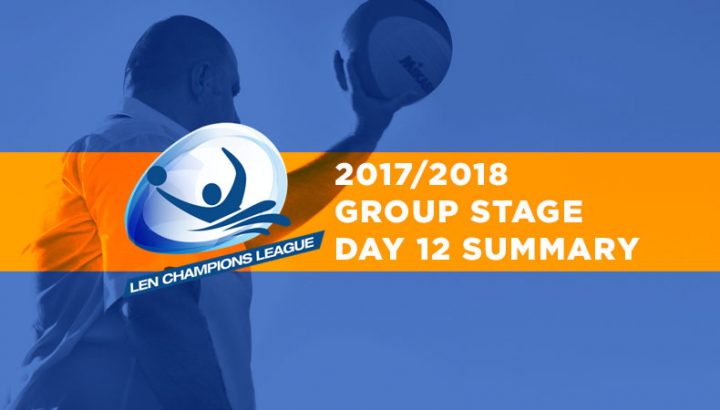 Favorite teams all delivered on Day 12 so four more spots are booked in the Final Eight tournament, to be held on 7-9 June in Genoa (ITA). The big game of Group A turned into a lopsided contest as Olympiacos was too strong for Brescia (ITA) this time. The Italians could hold on towards the end of the first period but in the second the Greeks started rolling. From 3-2 they rocketed to a 7-2 lead while Brescia missed three man-ups. Being five-goal down in Piraeus at the halfway mark has never promised too much for any visiting team and miracles didn’t happen this Wednesday either. Olympiacos won by seven (Konstantinos Genidounias netted 6) and secured its spot in the F8 and enjoy a four-point lead with two rounds to go while sitting in the first position.

Barceloneta joined them with a fine win in Budapest over OSC (HUN). The game wasn’t that close as the final result (6-8) would suggest as the Spaniards rushed to
a 1-4 lead in eight minutes and even if they failed to score in the second, they defended well keeping the Hungarians in a safe distance. A double in 2:18 minutes after 3-5 late in the third gave the Spaniards a calming lead and they sailed away with their 7th win in a row.

2016 champion Jug (CRO) and newcomer Dynamo (RUS) both earned convincing home victories to pass Brescia (ITA), now they are two points clear ahead of the Italians. This promises a thrilling finish for these three sides, though while Jug and Brescia have one game in hand against lower-ranked opponents, Dynamo faces Olympiacos in the penultimate round and will travel to Dubrovnik on the last day.

In Group B, Szolnok found it much harder to beat Spandau (GER) than perhaps the title-holders expected. The Germans fought hard and proved once more while they are on the verge of making the F8 for the first time. Szolnok could have had a less nerve-wracking finish but a rare penalty miss from last season’s MVP Andrija Prlainović prevented them from going 7-4 up in the third. Instead, Spandau hit back for 6-5 and later managed to equalize after 8-6 to 8-8. However, Milan Aleksić scored the game-winner from a 6 on 5 with 2:43 remaining to secure Szolnok’s F8 berth.

Spandau should still not be worried thanks to Eger which beat Jadran (MNE) in a big battle. The host side took a 4-1 lead by halftime, that was narrowed to 5-3 before the last break but two goals in 53 seconds after 6-4 decided the outcome. It sent Eger to the F8 for the 4th straight occasion, while Jadran still sits five points behind Spandau and have only mathematical chance to make the cut. Spandau is set to win in Sabadell in the following round, if not, the last day’s clash between the Germans and the Montenegrins would be a life-or-death encounter.

Recco enjoyed another easy cruise, this time in Bucharest. Steaua did well in the first half, trailed only 4-6 but the Italian giant posted a 2-7 run in the second and needs one point against second-ranked Eger in the following round to secure the top spot.

The game of the bottom-ranked sides turned into an epic 30-goal thriller. Alphen (NED) was on its way to earn its first point(s) in the competition as they led 10-7 in the third but Sabadell (ESP) stroke back with five goals in 4:15 minutes and in a brilliant finish they managed to win the game 14-16.