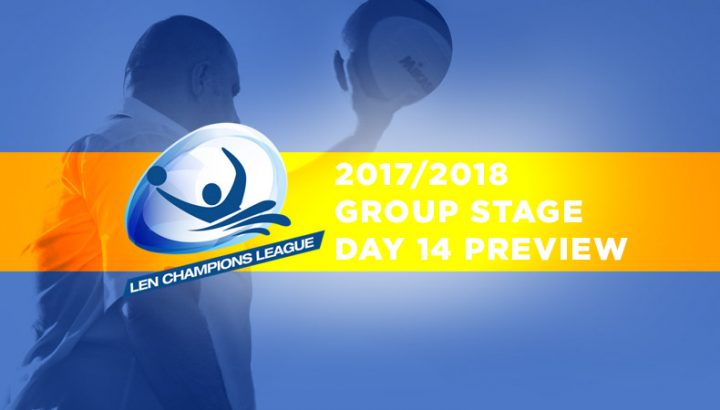 It’s judgment day for Jug (CRO), Brescia (ITA) and Dynamo (RUS): their race for the Final Eight will end on Wednesday but only two of them could join the other six sides which have already secured their respective berths for the June 7-9 showcase in Genoa.

The last day of the prelims promises great excitements for three teams in Group A and two of them will face each other. 2016 winner and last year runner-up Jug has had some ups and downs in the current season, their struggle started right on the opening day when they suffered a somewhat shocking defeat in Moscow.

Newcomer Dynamo proved its strength in the following rounds, still, the Russians now need a smaller miracle now: a win in Dubrovnik. That would send them straight to the Final Eight as the results against Jug would favor them in case of equal points. However, beating the Croats in Dubrovnik is one of the toughest challenges in water polo: in the past four years only Recco was able to do that in the Champions League (last season), Jug remained unbeaten on the other 20 occasions.

“Their oscillations in the matches are similar to ours. They have fantastic periods of the game and also very bad parts where they lose points. Unexpectedly, they were playing very well away from home. They have some excellent players starting from center forwards duo, two very good lefties and especially their captain Kholod who’s playing the best season of his career.”

“It is going to be a decisive and key game, very important for both teams. The winner goes on.”

At the same time, Dynamo has only one away loss so far in the prelims, on Day 2 Olympiacos beat them, later they managed to have draws in Barceloneta and Brescia as well. A draw this time would set up an interesting scenario: the tie would send Jug through, while Dynamo would only have a chance if Brescia loses to Hannover at home half an hour earlier.

“In our last game of the group we will face one of the best teams in Europe in recent years, and the only team in the group, besides us, that has already secured its position in the Final8 in Genoa. This match is a matter of prestige and continuity of good games that we have been doing both for some time now. We will play in our home for the last time before Genoa and we want to win and celebrate with our fans together, our third straight qualification for the best teams in Europe and the first position of the group of course.”

“Olympiacos has proved to be the best team in our group. They are very strong at home where they have won all their matches. This is the last game of the group and both teams have already qualified for the Final 8. For me, the most important now is to prepare the team for the end of the season. Before to play the Final 8 our target is to win the national league.”

Brescia is favorite there, though, in case of a home loss and a tie in Dubrovnik, Dynamo would finish 4th as both matches against Brescia ended in a 9-9 draw and the goal-difference of the Russians is better now (+13, compared to Brescia’s +6). Though it’s just a game of numbers: a win for Brescia – which is very much in the cards – would secure the Italians’ second straight qualification for the finals.

“Here we are with another – the last – crucial step on the road to Genoa: for us, only winning is the good result and we absolutely want to get three points. Hannover is a hard opponent: the Germans have two dangerous centers, two great forwards like Radovic and Brguljan and a lot of experienced players. We have to pay a great attention to the whole game, making our best to keep a high rhythm and avoiding their 5m shots.”

“We are in good shape, we have won the last match in the Champions League. Above all, last weekend we achieved a clear victory over Spandau and we won the German Cup. Happy to go to Italy to give our best.”

“This is the last game in the Champions League in this season and this is our last chance to win at home. We know that the game against this team of Partizan will be much harder than we played in Belgrade last year. We will try to deliver what we practiced and that should help us in the Hungarian league playoffs to get the 3rd place.”

“We are preparing for the final phase of the domestic league, a few very important games are ahead of us. On the other hand, we want to end this season’s Champions League with a nice game. In the 1st round, we played well against OSC in Belgrade, we lost the game in the last quarter. If we repeat that performance, we will enter an equal battle for the points.”

The clash of Olympiacos (GRE) and Barceloneta (ESP), both qualified already, should be a nice battle, though in case the Spaniards go down in Piraeus they might lose their second place to Jug – in fact, in the view of Group B happenings, it’s all about which Hungarian powerhouses they face in the quarter-finals.

As for Group B, everything seems to be settled, the four qualified sides, Recco (ITA), Szolnok (HUN), Eger (HUN) and Spandau (GER) play with the bottom-ranked ones and supposed to win their respective encounters so the current ranks might become the final ones.

“We worked a lot for the second place in the group, and we would like to finish in the same position, so our goal is the victory. Besides we want to make happy our fans, we have to thank a lot for them in this season too.”

“We have to improve our game in defense. In the last games, we conceded too many goals both in the Champions League and in the national championship. In our last appearance in Europe this season, we would like to display a good game in this competition that we have enjoyed so much and from which we have learned a lot.”

“It is obvious that we want to win this game, as we always do in any Champions League match. On one hand, it is very important that we play our best against the Spanish team. On the other hand, we will do our best to satisfy our fans on our last day at home in this competition.”

”Wednesday we’ll have our last Champions League match, apparently in the pool of the current European champion. We have our playoff in our national league the same week and this match has to serve us to prepare for our Sunday contest. We will try to finish the group stage with a good image.”

“Even we are already qualified, we want to show a good game. We want to keep the points in Berlin. Jadran has shown a good performance in the prelims and I do expect a close game.”

“This will be last game for our team this season. We had a good season and we will give our best to achieve the best possible result in Berlin. Spandau is a very good team and they have confirmed that during the season.”

“This Champion League season brought us so much, big and though games, a lot of experience for the younger players, great for team building when you are on the road with the whole team but in the end, it made us stronger! This strength we need to use in the playoffs for the Dutch league, if we do that properly we will be the champion of the Netherlands.”

“There is nothing up for grabs, but it will be a useful game as a test for the finals. The aim, tomorrow, is to take as few goals as possible.”