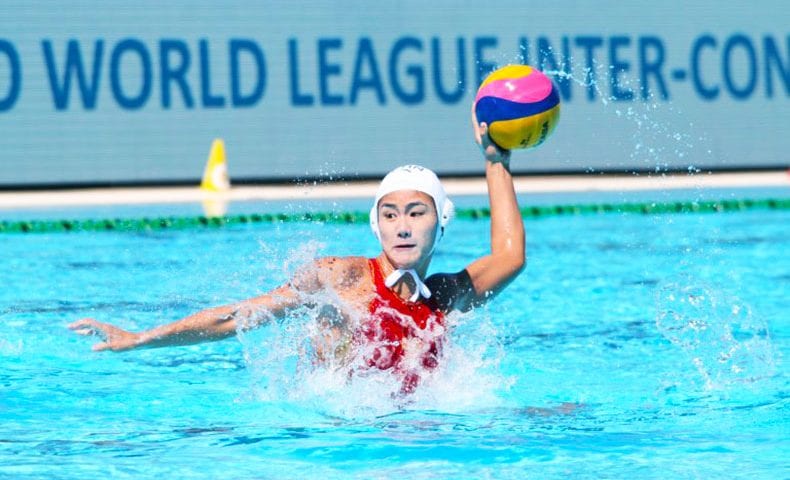 Perth, Australia, Mar 28.— China blasted to a men’s group A victory at the expense of Kazakhstan at the FINA Water Polo World League Intercontinental Cup at the HBF Stadium in Perth.

It came via a sudden-death penalty shootout in a torrid match that had 30 major fouls, seven players ousted from the pool with the maximum foul count and speed, power and testosterone aplenty.

However, the one point gained by Kazakhstan was enough to clinch the group as China only earned two for the shootout win.

The lead changed on numerous occasions with China ahead at halftime and three-quarters by one but allowed Kazakhstan to gain the 9-9 equalizer at 1:37 in the final period. Both teams were perfect in the normal rotation of the shootout as were the first two Chinese and the first Kazakh. However, the 14th shot was blocked and China won.

Argentina took out third spot with a 14-9 victory over New Zealand.

In Group A, Australia closed out the group with a third win, downing South Africa 19-6 and Japan claimed the spot with a 13-10 win over Canada.

In the women’s competition, the States of America finished top of Group A with a handsome 20-3 margin against New Zealand.

China came back against a feisty Japan for second place in the group to win 8-7, clinching the winner at 1:03.

Australia won Group B, finishing with a 15-4 margin over Kazakhstan in the final match of the night.

Canada needed a quarter to get into the swing before racing away to a 16-4 victory over South Africa. South Africa worked hard throughout earning extra-man situations but failing to convert. With the match at 3-2, Canada was being shown up by the less-experienced South Africans. Even the halftime score flattered South Africa more than Canada.

Then the onslaught occurred, Canada drove, snapped the passes, controlled center forward and made sure of the shots. At the defensive end, Canada smothered the opposition as concentration slipped at vital times and stole a large amount of ball. South Africa also put pressure on itself with poor passes and catching when in the scoring zone.

The United States of America finished top of its group, as expected, beating a confident, yet largely inexperienced, New Zealand. The USA always had the firepower and the quick thinking and the goals started raining just after the opening whistle. To the Kiwis’ credit, they kept giving goalkeeper Ashleigh Johnson plenty of work to do.

This tournament is giving Adam Krikorian plenty of chances to rotate players and give newcomers time in international waters. Youngster Honnie Vandeweghe is reveling in her chances, scoring in each of her first two encounters. One of the best goals of the match was when goalie Johnson came over the half and joined the attack with a little more than three minutes remaining. The shot rebounded over the side rope.

The goal judge (70+ world champion Bill Wallace) threw the ball to the goalkeeper who flipped it to Emmerson Houghton on three meters. She fired the ball like an arcing missile into the USA goal while Johnson named the player of the match, was scampering back, but had not even made halfway. Johnson came forward in the last minute and was set to score a goal, but her friendly fire hit the crossbar.

The Asian teams slogged it out for four solid quarters and the match was always in doubt. It seemed that Japan had China’s measure but that was not necessarily the case. The match swung left and right with China opening, Japan leveling at 1-1 and 2-2 before going 3-2 ahead, leading 4-3 at the halftime break thanks to a Yuri Kazama who was loose on the bottom left.

China had a chance to level but fluffed the cross pass when the goal was wide open. Japan increased the margin with Yumi Arima, a truly class player, netting from center forward. China returned the favor twice to level at 5:05 and the only other goal of the third came Japan’s way through Arima. China missed a penalty attempt, which could have had the match even going into the final break. China leveled at 5:37 in the fourth via a Zihan Zhou penalty strike. Huan Wang moved China to 7-6 at 1:40 from the deep left.

Arima shoveled in her third goal from the center for 7-7 at 1:18. China responded through Xiao Chen at center in what the Japanese coach protested what he thought was flagrantly a ball under. Japan had the ball in the final seven seconds but failed to get a shot away. This match showed the speed, verve and proved that the decision to play the free throw from where the ball is and the 20 seconds attack after a corner sped up the game. This is showing through in Perth.

China may have emerged the victor, but it took four torrid quarters, an attrition rate accustomed to a battlefield, and a sudden-death penalty shootout that had the crowd on its feet. It was a brutal encounter that had the referees throwing their arms around like windmills as a procession of players went to sunbathe on the benches. There was too much playing the player, something the new rules are trying to clean up.

However, the referees applied the ejection rule and by the three-quarter mark there were 23 major fouls and five recalcitrant players were satisfied that they wouldn’t have to compete in the shootout should that occur, which was highly likely at the stage. In fact, seven players avoided the shootout with four Chinese topping the bad-boys’ list. In the end, China amassed 17 majors and Kazakhstan 14 — a tournament low point. Kazakhstan started two up, China leveled; both teams took the lead in the second quarter with China ahead at the long break. Kazakhstan swiftly retook the lead in the third period only for China to lead twice and be 7-6 up at the last interval. Kazakhstan had to level three time in the final quarter with the hero being Alexey Shmider gaining the last two for Kazakhstan, one on extra and the other a bullet from the top.

This was after he had a penalty shot attempt blocked by Honghui Wu early in the quarter. His zinger came at 1:37. China had a shot blocked at 1:08 and gained a corner at 0:29. Kazakhstan and China both failed to convert extra-man attempts in the last minute and China was indecisive with the final shot, forcing the shootout. The normal rotation produced flawless shooting. The first two shooters converted as did the second Chinese player. Then Maxin Zhardan had his shot blocked and China finished top of the group.

Pure energy by both teams produced a match that could have gone to a penalty shootout. It was an even slate in the first half with a flurry of penalty attempts in the opening minutes producing two from three. However, it was the third period that Japan finally came alive and turned the tables on Canada. It was counter-attack that broke the camel’s back.

Nicholas Bicari, one of the outstanding players in Perth, took Canada ahead at the start of the period for his third goal, but then a goal on extra and two counters took Japan two ahead by 5:34. Canada made it 7-6 before Yusuke Inaba drilled a couple of long shots, one on extra. Aria Soleimanipak (CAN) kept the Japanese honest twice bringing it back to two goals before Mitsuaki Shiga deflected a shot off a defender’s torso on extra for 11-9. Hope came Canada’s way via a Devon Thumwood penalty goal — making it three from five — and an 11-10 scoreline. Inaba and Takuma Yoshida boosted the margin with extra-man goals, which proved the final score — 13-10.

Argentina proved the stronger of two immovable forces. They were well suited and while Argentina had more recent experience in America, the Kiwis were up for the action, working hard on all facets of play. Argentina led by four at the final break and the Kiwis close to 12-9 with less than six minutes remaining, a theoretical hope for success.

However, Ivan Carabantes, a continual thorn in the Kiwis’ side, slammed in his fifth goal soon after four-goal hero German Yanez lifted the team. New Zealand has performed well, but with no points and Argentina showed that the second phase could its chance for higher honors.

The Aussie Sharks ripped into South Africa and came away with the group victory. For South Africa, it was a tough group and it is looking forward to the crossovers as the team is improving with each match. Australian head coach Elvis Fatovic used his bench well and made sure of pressing the advantage at all times in preparation for the second phase. Nicholas Brooks was powerful on the counter-attack, Tim Putt was named the player of the match. South Africa kept pushing for goals and came up with some excellent strikes, including a long slide that evaded goalkeeper Anthony Hrysanthos.

Joel Dennerley played the first half in goal for Australia and stopped an early penalty shot that could have had the score at 4-2. Instead, Australia raced to a 6-1 margin at the first break that was always going be a too-hard hurdle to jump for the Kiwis. The extra-man count for Australia was exceptional in the current era — 13 from 16 chances.

The Aussie Stingers moved into the slot in the group with a convincing result against a spirited Kazakhstan. The difference was the result as the Stingers get better and better on the march to the FINA World Championships in July. Captain Rowie Webster fired in four goals and Zoe Arancini chipped in with three as the goals kept mounting. Australia moved the ball quickly at all times and the urgency of 20-second attacks was evident. Anastassiya Yezemina netted consecutive goals in the final quarter to lift Kazakhstan spirits.