Croatia and Spain join Montenegro and Hungary in quarterfinals in Prague

Croatia and Spain completed the list of the quarterfinalists at the World Men’s U20 Championships in Prague.

Today, Croatia secured 1st place in Group A, while Spain, as expected, finished 1st in Group B. The two teams joined Hungary and Montenegro, which secured top spots in their respective groups yesterday.

Teams that finished 2nd and 3rd in their groups will face off in the playoffs tomorrow.

The fifth competition day at the Swimming Complex Podoli was opened by an encounter between Croatia and Russia. The Croats needed a point to stay in 1st place. Russia had to win to jump to 1st place. But, the game turned into a one-sided contest quickly. Croatia thrashed Russia (13:5) to cement 1st place. In the last match of this group Italy defeated Argentina and caught up with the Russians in points. According to the tie-breaking rules, if two teams have equal points and their match ended in a draw, the results against the highest placed team shall be considered. Italy and Russia shared points yesterday, but Italy suffered a narrow loss to Croatia (12:13) and because of that, it won 2nd place. Italy will play against South Africa in the playoffs, while Russia will have a demanding task since it will face title-holder Greece.

Spain and Serbia finished atop Group B with seven points each. Both teams recorded easy wins today (Serbia – Slovakia 15:0 and Spain – Czech Republic 18:4). Their encounter ended in a tie (6:6), so the scores against the 3rd-placed team (USA) were decisive. Spain beat the USA 20:10. Serbia wasn’t so convincing against the Americans (14:9), and it has to seek a spot in the quarterfinals through the playoffs. Serbia’s opponent will be Brazil. 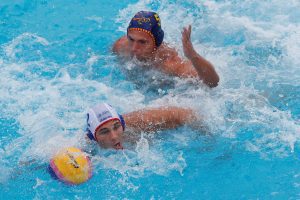 Croatia collected two points against Russia easier than expected. The Croats kept Russia goalless in the first ten minutes. Croatia’s goalkeeper Roko Pavic (who posted 15 saves today) was outstanding, while his teammates netted six goals in the first ten minutes for a big 6:0 lead.The Russians couldn’t recover from the opening shock. By the end of the first half, they cut the deficit to four (3:7). After the middle break, Croatia scored five unanswered goals and jumped to 12:3. They controlled the match until the end. 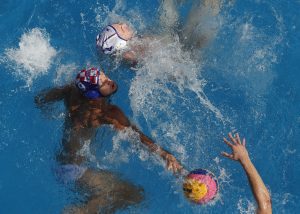 After Croatia’s convincing win, Italy needed to take two points against Argentina to climb into 2nd place. The Italians were the favorites, but they needed some time to secure the win. Italy took an opening 2:0 lead. Still, Argentina responded with quick goals to equalize (2:2). Italy regained a 2-goal advantage before the end of the first quarter (4:2). By the middle of the second period, Italy stretched the margin to four (6:2). 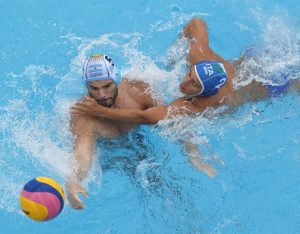 Argentina, which had an excellent percentage of the man-up conversion, scored three unanswered goals to cut the deficit to one goal (5:6). In the middle of the third period, the South American side was two goals down (6:8). After that, Italy, led by Andrea Mladossich, produced a 5:0 series within five minutes for a safe seven-goal advantage (13:6) and closed the contest.

Serbia kept a clean sheet for the second time at the tournament (the Serbs beat the Czech Republic 28:0 on Day 1). But, a convincing win is a slim consolation. A winning margin against Slovakia isn’t decisive for determining the classification of the top two teams. The battle for the 1st place was practically over yesterday, when Serbia beat the USA 14:9, with a lower margin than Spain achieved (Spain – USA 20:10). 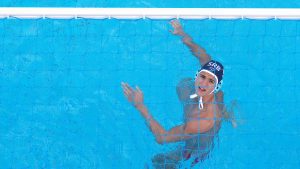 The result says all. Serbia’s defense was superb today. The silver-medalists from the 2019 World Championships in Kuwait left no chance to the Slovaks, who were powerless today. The Serbs recorded a convincing win, although they didn’t convert three penalty shots (one was missed, two were saved by Slovakia’s goalkeepers). Today’s duel was Serbia’s warming-up for the knockout round. Serbia shouldn’t have a hard exam in the playoffs. It will face Brazil. If they beat Brazil, the Serbs will face a much tougher challenge. Croatia waits for a winner of the game Brazil-Serbia in the quarterfinals.

The competition in Group B was closed by a match Spain – Czech Republic. Spain was too strong for the winless hosts. Spain did a clean job to confirm 1st place and book a ticket for the quarterfinals. After a solid first half, the Spaniards slowed down during the third period, but they blew away the home team in the final eight minutes and started preparing for the quarterfinals. Their next opponent will likely be Italy. 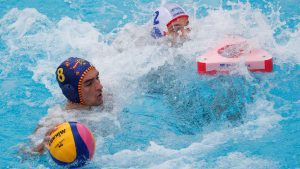 Hungary downed Egypt to continue its winning streak. Hungary finished the group play with three convincing wins, and the biggest triumph was today’s match against Egypt. 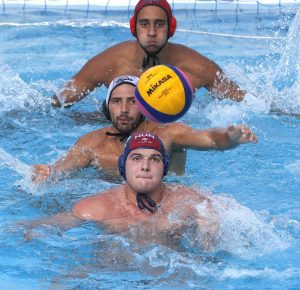 The two teams aren’t in the same weight category. Nothing but Hungary’s victory was expected. The Europeans earned a 7:0 lead before the Africans scored their first goal in the match. Just seven seconds from the end of the second period, Shoeb converted a man-up for 1:7. After the middle break, Hungary got back on the right track and demolished Egypt. Vendel Vigvari was unstoppable again, he had an excellent percentage of shots (5/6). He was voted the MVP of the game.

The last game of Day 5 was very similar to the previous five today’s matches. A favorite dominated and there was no excitement. The young Montenegrins, who secured 1st place yesterday, cruised to a win. Kazakhstan had more attempts to score than Montenegro, but Asians didn’t find the net in the first half. 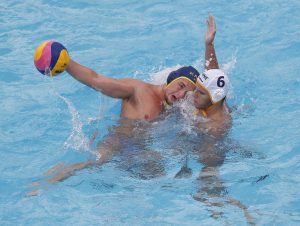 Montenegro built an 8:0 lead in the first two quarters, while Kazakhstan got on the scoreboard in the 18th minute when Khassanov hit the back of the net from the 5m line. After the explosive first half, Montenegro slowed in the third and the fourth periods but controlled the game.

Road to medals and classification matches 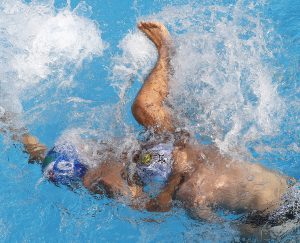