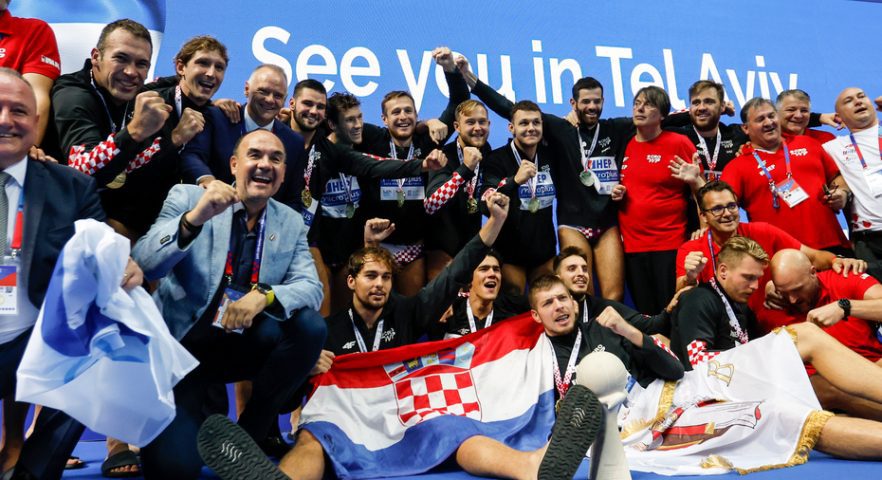 Croatia is a new European champion for men.

The Croats defeated the 2020 champion Hungary in a brilliant battle in the final in the “Spaladium Arena” in Split – 10:9.

Croatia led for most of the match, played in front of 9.000 people, but Hungary was always just behind the hosts and managed to level the score on a number of occasions. Everything was open until the very end and in the fourth quarter, which saw four penalty shots. The decision came in the last few minutes. A Split-born Jerko Marinic Kragic gave Croatia a 10:8 lead in the 30th minute. In the remaining time, Hungary scored only a consolation goal.

Croatia became the European champion for the second time. The Croats won their first title also in front of the home crowd – in Zagreb in 2010. Now, Croatia has five European medals in its treasury (2,2,1), and Hungary 26 (13,7,6). 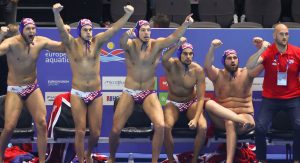 The first quarter of the big final already brought several twists and turns. Konstantin Kharkov opened the scoring in the 3rd minute, and the stands of the “Spaladium Arena” exploded. Still, the Hungarians silenced the home team’s fans with two goals – Zalanki leveled with an extra man, while Molnar scored from a counter-attack and Hungary went ahead in the fourth minute. But, the hosts replied in the same way – Rino Buric leveled shortly after Molnar’s goal. Captain Ivan Krapic gave Croatia a new lead by converting a man-up in the 7th minute, but Molnar closed the first quarter. He leveled at 3:3.

The stands exploded again in the 11th minute. Bukic shot towards the goal, Vogel touched it. Many believed that the ball crossed an imaginary line. However, after a VAR review, the referees decided that it wasn’t a goal. But, a minute later, there was no doubt. Kharkov sent the ball into the net from a 6 on 5 from the deep right, and Croatia earned a 4:3 lead.

After that goal, Croatia played better and better. Goalkeeper Marko Bijac, a hero of several Croatia’s wins at the 35th Europeans, posted three nice saves in Hungary’s three consecutive attacks. The home team had a slim 4:3 advantage before the second half.

Seven goals were scored in the first half, and the third period was a festival of goals, compared to the first two quarters. Each side found the net four times. 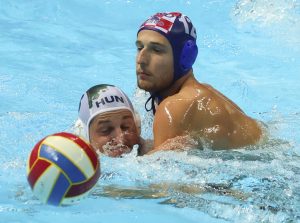 The Croats kept the momentum after a three-minute break. They earned a man-up in the first possession in the second half. Rino Buric scored and for the first time one team had a 2-goal advantage – 5:3. But, not for a while. Toni Nemet answered immediately.

Then, both teams missed a few nice opportunities. Still, Hungary leveled at 5:5 in the 20th minute. It earned a penalty shot. Krisztian Manhercz took responsibility and the sides were tied again.

Hungary had a chance to take a lead, but Marinic Kragic blocked a shot from Hungary’s captain Jansik. The same player committed a personal foul after that miss, Croatia got an opportunity with a man-up. It was Rino Buric who successfully finished the attack for the third time in the match. The “Baracudas” earned a 6:5 advantage. After that, the teams traded the goals. It seemed they would enter the final period tied at 7:7. But, Croatia earned a man-up in its last possession. After a very nice attack, with several passes, Andrija Basic netted an admirable goal (8:7) with 18 seconds left in the third period.
Jansik equalized with a man-up (8:8) in the second minute of the final period. As the end of the game was approaching, both teams started making more and more mistakes. There were a lot of wasted and rashly finished attacks at both ends of the pool, lost balls. 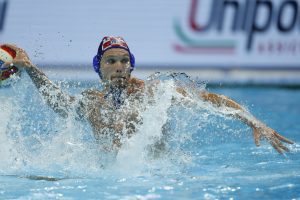 Two minutes and 47 seconds from the end, the Croats earned a penalty shot. Jerko Marinic Kragic sent the ball home from the 5m line. Just 20 seconds later, Hungary had a chance to level from a penalty. However, Krisztian Manhercz hit the crossbar, and the Croats started a new counter-attack. It was just Manhercz who made a penalty foul. Marinic Kragic took responsibility again, and did the right thing once more – found the net for 10:8.

It happened 02:07 minutes before the end, but everybody in the stands was on their feet. Croatia was very,very close to the gold medal. 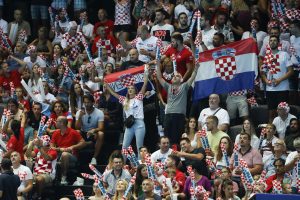 Jansik woke up Hungary’s hope by scoring from a penalty with 32 seconds to go (it was the fourth penalty in the last three minutes). However, 20 seconds before the end, Hungary’s Vigvari was excluded, Croatia got a man-up. All the hosts had to do was to keep the ball in the last seconds. They did it and became the European champions. 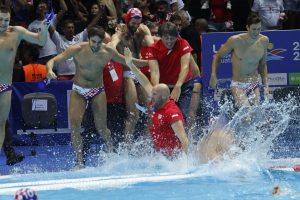 Head coach Tucak with the players

Marko Bijac, the best goalkeeper of the tournament thanked the fans and said that they had been a great support:

Hungary’s head coach Zsolt Varga congratulated the Croats, and all the players who won medals. He said that nobody in Hungary believed that his team and players could succeed in Split