Both games were scoring festivals with weak defenses. Croatia defeated the USA 14:11 in the fifth-place match. The game for the 7th place, between Italy and Montenegro, entered the shootout. Italy recorded an 18:17 victory.

By the way, a total of nine team sports have been included in the program of the 2020 Olympic Games: basketball, basketball 3×3, volleyball, handball, football, field hockey, baseball/softball, rugby 7s, water polo.

Classification matches have been played only in two sports – rugby and water polo. In other tournaments, the final standings of the teams ranked lower than 4th place were determined according to the results achieved in the group and the quarterfinals.

Team USA opened the match well, but the Croats managed to turn around an early deficit to a lead. The Americans were climbing back from time to time. Still, Croatia controlled the game and achieved a victory.

The USA had a 2:0 lead after less than two minutes of play, and they were 3:1 up in the 3rd minute. Xavi Garcia made it 2:3 in the middle of the quarter.

The Croats scored three unanswered goals in the first three minutes of the second quarter to earn a 5:3 lead. From that point on, the Europeans were always in front. The USA managed to reduce the gap to one goal, but not to equalize.
Two minutes before the last break, Luka Bukic converted a penalty and Croatia earned a 4-goal lead for the first time (10:6).

Still, the US didn’t give up and came very close once more – 10:11 with 02:04 minutes to go. Still, the Croats responded with a 3:0 series for 14:10. Nine seconds from the end, Xavi Garcia, who will retire after the Olympics, scored for 14:10 in a quick action. Fatovic assisted him from a long-distance, Garcia found some free space and sent the ball into the net with a nice lob. Obert closed the match in the last second. He fired the ball from the middle of the field to set the final score.

World champion Italy and Montenegro, the winner of the World League, opened the last day with a clash in the 7th-place match.

Both teams had a lot of ups and downs in this game. After all, it was hard for favorites to find motivation for an unnecessary game that brings nothing.

Italy started better and earned a 4:2 lead early in the second quarter. But, Montenegro replied with three goals to went to 5:4. After a quick exchange of goals in the last few minutes of the first half, the teams entered tied into the third quarter (7:7).

Nothing changed in the play of both teams after the middle break. They didn’t care much about defense. Italy led most of the time, but their biggest advantage was a 2-goal lead (10:8, 11:9, 12:10). 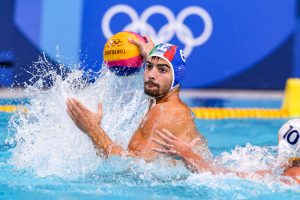 Aleksandar Ivovic opened the fourth period with a goal from a penalty to equalize – 12:12. Still, by the middle of the quarter, Italy regained a 2-goal lead (14:12). However, Montenegro, led by Aleksandar Ivovic, who, obviously, managed to find motivation, leveled the score in the final minutes. Ivovic converted a penalty three minutes before the end for 13:14. Fifteen seconds before the final buzzer, Italy lost the ball in its last attack of the match. Montenegro started a counter-attack, which was finished by Ivovic’s goal.
The Italians were better in a penalty shootout. But, nobody celebrated after this win. Both teams arrived in Tokyo to play medal matches and not games for the 5th-8th place classification.