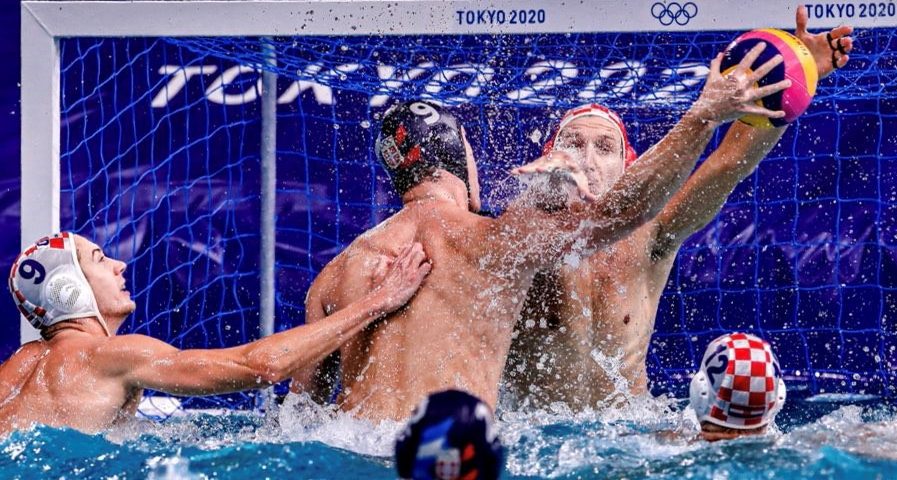 Several important games have been played today at the Tatsumi Aquatics Centre. But five games of Day 4 of the male water polo tournament were in the shadow of a water polo classic. Serbia and Croatia, the finalists of the 2016 Olympic Games, faced off in the big game of the day in Group B.

Croatia recorded a 14:12 victory and secured a spot in the quarterfinals. But, Serbia also booked a ticket for the last eight. Spain defeated Australia convincingly (16:5) in the earlier match and after that, it was clear that Spain, Serbia, and Montenegro advanced to the quarterfinals. Croatia joined the three after the win in the derby. On the last day, Spain and Croatia will battle for 1st place. The encounter between Serbia and Montenegro will decide 3rd place.

Team USA played quite well today, like against Italy, but the Hungarians proved who the favorite was. The USA kept up with Hungary for most of the first half. However, Hungary’s 6:0 rush was crucial for the outcome.

Hungary earned a slim 2:1 advantage in the first quarter. The United States dictated the pace in the second period and went in front two times (3:2, 4:3). Center-forward Ben Hallock scored 3rd and the 4th goal for the USA. The Americans had a 4:3 advantage in the 14th minute. But, after that, Hungary tightened its defense, USA couldn’t score for more than 11 minutes. 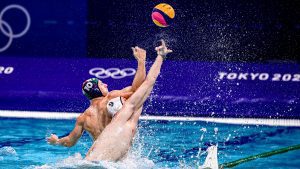 With two quick goals by Vamos and Harai, Hungary earned a 5:4 lead before the middle break. The European champions started breaking the Pan American Games winners in the third period. Krisztian Manhercz opened the second half with an admirable goal from a distance in the 19th minute (a direct shot from a free throw) to make 6:4. Marton Vamos converted a man-up for 7:4. In the 27th minute, Manhercz scored his 2nd goal, this time from the left, and his team went 8:4 up.

But that wasn’t the end of Hungary’s series of goals. The European champions got a chance to increase the margin from a penalty shot in the 2nd minute of the fourth period. Denes Varga made no mistake and sent the ball into the net from the 5m line for 9:4.
After that 0:6 series, the USA couldn’t come back, although the Americans didn’t give in. Shortly after Varga’s goal, Obert broke the USA’s silence that lasted 11:24 minutes (5:9). Cupido added an extra-man goal for 6:9. Three minutes and eight seconds before the end, Daube converted a man-up, and the USA cut the deficit (7:9).

Still, this 3:0 run didn’t help the Americans to win or earn a point. A minute and 47 seconds before the final buzzer, Manhercz netted his third goal today (10th at the tournament). Hungary gained a safe 10:7 advantage and kept a 3-goal distance until the end.

Italy struggled to beat the USA and to earn a point in the match against Greece. Japan played well in the first three rounds and caused some headaches to favorites Greece, Hungary, and the USA. But, it seems that, after three hard battles, the hosts ran out of gas for the finish of the group stage. 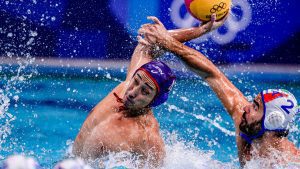 Italy dominated today’s game. The World champions opened the game with a 5:0 blast, and the Japanese couldn’t recover from that shock. Inaba scored the first goal for Japan in the 10th minute. Midway through the second period, Italy jumped to a 7:1 lead with two quick goals (Renzuto from a penalty and Figari). But, Japan didn’t surrender, scored two goals and trailed by five at halftime (3:8). Italy regained a 6-goal lead in the third period (9:3, 10:4), and Figlioli converted a man-up for 11:4 in the 22nd minute. The World Champions had a 9-goal lead (13:4, 14:5, 15:6) in the fourth period.

Italy kept 1st place in the group, but the final ranking in this group will be determined after the games of the last day – Italy-Hungary and USA – Greece.

Nothing but Greece’s convincing win was expected in the last match of the day. 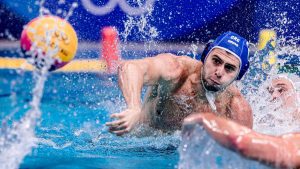 Since a goal difference might be decisive in a battle for the top spot in this group, Greece wanted to score as many goals as they could. Ar the end, Greece recorded a 28:5 victory, which is the biggest win at the men’s tournament in Tokyo (until today, Hungary held a record with a 23:1 win over South Africa). Each of Greece’s field players found the net today, while Fountoulis gave the most significant contribution to the victory with five goals.

But, the Greeks still haven’t climbed to 1st place in Group B. They have won 7 points, as well as Italy did, but the Italians have a better goal difference. Still, everything is open. On Day 5, Greece will play against the Americans, who can’t move from 4th place, and Italy will have a very demanding task in the match against Hungary.

Despite the fact that both goalkeepers did a quite good job (Bijac 14 saves, Pijetlovic 10 saves), there were many goals in the derby. Besides, there were many personal fouls (19 for Croatia, and 14 for Serbia). The Croats conceded 12 goals, but their defense worked well in crucial moments, and that was maybe the most important factor that made a difference. The Croats killed many of Serbia’s chances with a power-play advantage. Two Olympic champions from London 2012 Paulo Obradovic and Maro Jokovic made a lot of problems to Serbia’s defense and led Croatia’s offensive play.

Croatia took a flying start. After less than three minutes of play, the Croats had a 3:0 lead (Jokovic two goals and Buslje). Jaksic put Serbia on the scoreboard with a power-play goal. But, the Croats responded with two and jumped to a 5:1 lead in the 6th minute.

Still, Serbia was able to come back. Early in the second period, the Olympic champions cut the deficit to one (4:5). However, Croatia, which played its best game at the tournament, went to 7:4 (18th minute). The Serbs had a poor percentage of a man-up conversion, but they finally equalized late into the third period.

Mitrovic converted a man-up from the left for 8:8. Still, the Croats struck back powerfully. They produced a 4:0 rush. By the end of this quarter, Obradovic and Bukic found the net, and Croatia earned a 10:8 lead before the final quarter.

The Croats opened the fourth quarter in the same way they finished the third, with two goals for a significant 12:8 lead (Bukic and Obradovic scored a goal each again, just like in the finish of the third). In the middle of the quarter, Maro Jokovic scored his 4th goal, this time from a counter-attack, for 14:9, and there was no way back for Serbia. 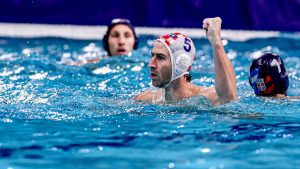 The Olympic champions scored three last goals in the match, but it was too late for a new comeback. Rasovic netted for 12:14 with 01:11 left on the clock. Croatia managed to keep a 2-goal lead until the end.

“We shouldn’t say that this is a big win, but it’s a significant victory. We secured the quarterfinals mathematically. Therefore, we made our first goal in Tokyo. These two great games (against Montenegro and Serbia) just proved that we are worth a lot. But there is no euphoria. The most important matches are yet to come. We haven’t done anything yet.”

“It was a very difficult game. Serbia is a great team. But I think we played a very, very good game today, even better than we did last time against Montenegro. We deserved the victory today. Serbia is the Olympic champion and whoever beats them, it means that the team is on the right way. But this is still the group phase and the most important things are ahead of us.”

“Bad beginning and the worst ending. We had a little bit of confusion in our defense. I don’t remember when the Serbian team ever conceded 14 goals. We can only analyze and prepare for Montenegro and see who we can meet in the quarterfinals. The quarterfinals are the worst and most important game of the Olympic Games”.

The Croats were much more aggressive, and that’s not good. And our attack with the player could have been better. The number of goals conceded is huge. There were many oscillations in our play. We have a chance, we are in the quarterfinals and we have to start coming back in the match with Montenegro.

After a strong start in the tournament, Australia suffered two consecutive big defeats. Two days ago, Serbia trashed the “Sharks”. Today, Spain taught the lesson to the team from the smallest continent.

Australia managed to equalize just once in the early stage of the game (1:1). Australia built a 4:2 lead in the first quarter and opened the second period with three straight goals for 7:2. At that moment, it was clear that this match would be very similar to an encounter between Serbia and Australia (when the Serbs led 10:1 at halftime). Spain, led by the best scorer of the tournament Alvaro Granados and experienced Felipe Perrone, dominated the match. Spain stretched the margin to seven in the third quarter (10:3, 11:4). In the 21st minute, Bake Edwards found the net for 5:11, and it turned out that it was Australia’s last goal in the match. Spain kept the “Sharks” scoreless during the last 11:24 minutes. 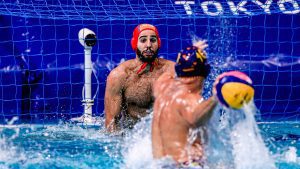 Australia’s dream of quarterfinals is over after this loss. The “Sharks” will meet Kazakhstan on Day 5. They can catch up with Serbia or Montenegro in points. But, even if Australia is tied with one of these two teams, it won’t reach 4th place because the “Sharks” lost both to Montenegro and Serbia.

Kazakhstan played its best game at the 2020 Olympic Games, but that wasn’t enough for, at least a point, against one of the favorites for the title. 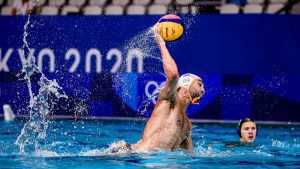 The Montenegrin team, which had two goalies today (an injured center-forward Spaic was in the stands), controlled the game, but it didn’t want to spend too much energy. By the middle of the first quarter, the Montenegrins earned a 4:1 lead. In the second quarter, they streched the margin to five (10:5, 11:6). They continued to dominate after the middle break, and jumped to a 14:6 lead. Then, the Montenegrins started slowing down and let Kazakhstan reduce the gap.