Danilo Ikodinovic: Competitions for clubs should be played during summer

He was the best athlete of the year in Serbia and Montenegro. He was the MVP of the Champions League Final Four, he was the World champion, won two Olympic medals, three titles of the European champion…

He is Danilo Ikodinovic, one of the best Serbian water polo players of all time. Ikodinovic talks about his career, the modern and the water polo in the time he played, and more in an interview with Total Waterpolo.

Ikodinovic (43) started to play water polo in his hometown Belgrade. He grew up as a player in the famous school of WPC Partizan. The first six seasons of the senior career (1992 – 1998) he spent in Partizan.

-It was tough to live in Yugoslavia in the ’90s (the international sanctions were imposed against Yugoslavia, and that have impacted the economy and society – Ed.). The sport passed through many difficulties, as well as the whole nation. The clubs didn’t have good conditions to train and play matches – Ikodinovic starts a story about his career.

There is  something good in everything bad

But there is always something good in everything bad. Yugoslavian national teams and clubs weren’t allowed to compete in the international stage during the sanctions. Because of that, the national water polo federation decided to change the calendar. The league was played during the summer.

-Playing the national championship during the summer at the outdoor pools evokes the most beautiful memories of the first years of my senior career. It was a fantastic experience. The games were played in front of the packed stands. There were a lot of spectators in the games in Belgrade, as well as in the other cities, especially in towns located on the sea. It would be great to change the water polo calendar. Instead, during the winter, the clubs’ competitions should be played during the summer. An exception would be the Olympic year.

Water polo is a summer sport, and it’s much better and more attractive for the spectators to play in outdoor pools. I believe that water polo would become more popular if the clubs’ competitions are held during the summer. National teams can play during the winter.

This idea isn’t impracticable. Since 2012, the European Championships have been playing during the winter in the Olympic year. A lot of the tournaments for the national teams can be moved easily from summer to winter.

This summer might be a “pilot episode” in Europe. Since the Olympic Games are postponed, there will be a possibility for playing national leagues during the summer, of course, if the coronavirus spread is stopped, what we hope.

Ikodinovic won one national championship of Yugoslavia (1995), three national Cups, and the 1998 LEN Trophy (today’s LEN Euro Cup), playing for Partizan before he moved to Italy.

After a season in Catania, and two in Brescia, Ikodinovic arrived in Pro Recco in 2001. That year was the beginning of Pro Recco’s new golden era. In the season 2001/02, the club won its first national championship after 16 years.

-The years spent in Recco were the most beautiful and the most successful part of my career in clubs. Pro Recco formed a great team. My teammates were Vladimir Vujasinovic, Tibor Benedek, Massimo Ferretti, goalkeeper Jesus Rollan… Today, Recco plays in the pool in Sori. But two decades ago, we played in the outdoor pool, covered by a temporary roof, in the town Recco, which has 5.000 citizens. Only the big games were staged in Genoa.

Recco is a town that lives for water polo. We always played in front of the packed stands. Players were heroes, but on the other side, it wasn’t easy to play for Recco. Everybody loved us players, but we were under pressure because fans always wanted wins. We were in the spotlight everywhere we appear in the town. 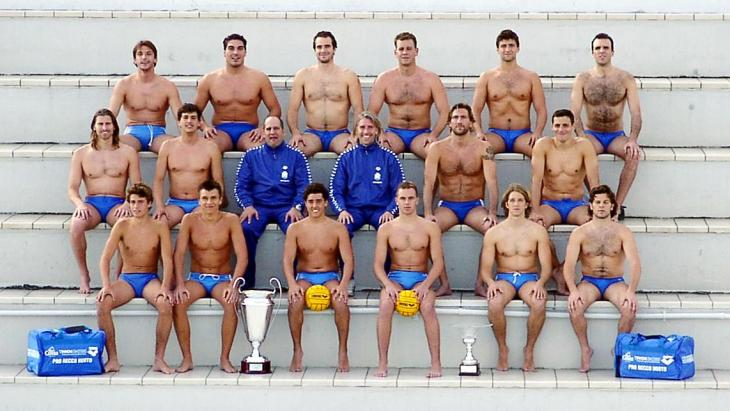 The team of Pro Recco in 2002 (Ikodinovic first from left in the top row) Photo: Pro Recco

Pro Recco has won 8 LEN Champions League (Champions’ Cup earlier), but the Italian club clinched “only” two European titles in the 20th century (1965 and 1984). The third title came to Recco in Ikodinovic’s second season in Recco – 2002/03.

-The 2003 Final Four was played in Genoa. We had big pressure since we were the hosts, and our fans had big expectations. But, we overcame all of that. After a 5:4 win over Mladost in the semifinals, we defeated Honved convincingly 9:4 in the final for a big celebration in Genoa and Recco.

Pro Recco had many stars in the squad, but one of them stood out at the Final Four. Danilo Ikodinovic was voted the MVP of the tournament.

-Yes, I was voted the MVP. I am proved how I played at that Final Four and the MVP award is the most favor individual honor during my career.

In the same year, Pro Recco clinched the LEN Super Cup by defeating Brescia 6:5, but after that, the club didn’t manage to retain the trophies.

-Maybe our generation should achieve more than it did, but we also didn’t have luck. Two years in a row we lost the fifth decisive match of the playoffs final by a goal (to Posillipo and to Brescia). But the sport wouldn’t be exciting if the best team wins each time. All in all, I left Recco with a lot of pleasant memories.

Ikodinovic left Recco in 2005. After that, he played for Partizan for a season. The next destination was Kazan. From 2006 to 2008, Ikodinovic played for Sintez Kazan and won his second LEN Cup (2007).

Unfortunately, after the second season in Sintez, he suddenly ended the career. A hard motorcycle accident in 2008 and injuries he suffered in the accident halted Danilo’s career.

Although he had to stop playing water polo when he was 32, earlier than it was expected, he collected many medals with clubs, as well as with the national teams of Yugoslavia (Serbia and Montenegro) and Serbia (from 2006)

Danilo Ikodinovic won 17 medals with the national team. He has Olympic silver from Athens 2004, and bronze from Sidney four years earlier. At the Europeans, he clinched three gold and a silver medal.

He debuted at major competitions in 1997, with the silver medal at the European Championship in Seville.

-The European championship in Seville 1997 was the strongest tournament at the Europeans until then. There were a lot of excellent teams, while Yugoslavia had a very young squad. I was 21-years-old, and the oldest player was Veljko Uskokovic, who was 26.

Yugoslavia wasn’t among the strongest favorites, but it reached the final.

-In the quarterfinals, we defeated host Spain, that played with the same team that won Olympic gold a year earlier. After that, we were better Croatia, the Olympic silver medalist, in the semifinals. In the final, we faced Hungary. After a hard battle with only five goals, Hungary recorded a 3:2 win. Still, we were delighted, like we clinched world title for us. That was a big success for the young team.

The new Yugoslav water polo generation entered the world stage in Seville and started a series of significant successes. After the European silver came two European titles (2001, 2003), Olympic bronze (2000) and silver (2004). Yugoslavia (Serbia and Montenegro) took four medals at the World Championships – bronze in 1998, silver in 2001, bronze in 2003, and finally, the gold medal in Montreal in 2005.

-The World Championship in Montreal is my favorite competition with the national team. Not just because of the gold medal. We were a very compact squad. The title came as an award for a great team effort. We played excellently during the tournament. We defeated Hungary 8:7 in the final and took revenge for losses to Hungary at the previous competitions – Ikodinovic continues in an interview.

In 2005, Ikodinovic was voted the best athlete of Serbia and Montenegro by the newspaper “Sport” and received the prestigious award the”Golden Badge”.

The most painful loss for many Ikodinovic’s teammates was a 7:8 defeat against Hungary in the 2004 Olympic Games final.

-Yes, that was the most painful defeat for me too, because of the way we lost. We had a 7:5 lead before the final quarter and didn’t manage to keep the advantage. But, honestly, we didn’t deserve the gold medal in Athens, since we didn’t show our best. But, a year later, everything worked perfectly in Montreal.

After the gold in Montreal, Ikodinovic was a member of the teams of Serbia and Montenegro and Serbia, that won three crowns in 2006 (European gold, FINA World Cup, FINA World League), World League 2008. Before the 2008 European Championship, he suffered a motorcycle accident and had to end the career. 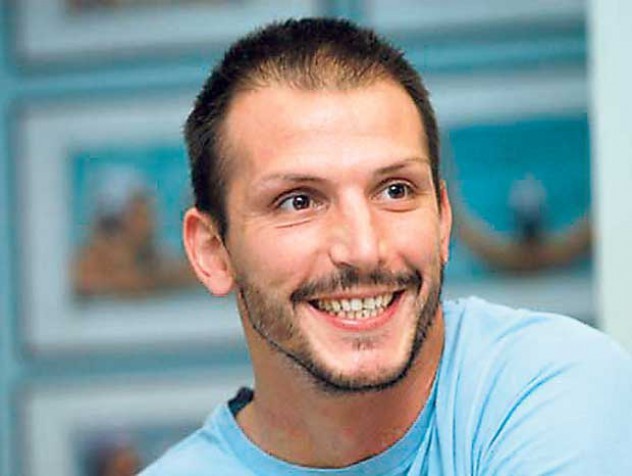 Comparing water polo game in the period he played and today, Ikodinovic says:

-At the moment, there are a lot of serious medal contenders in clubs’ competitions, as well as each significant tournament for the national teams. It’s always hard to reach the semifinals. For example, we witnessed that Olympic and World champion faced off in the match for the 5th place at the 2020 European Championships (Serbia-Italy), and it is normal. Several excellent teams played at the Europeans in Budapest, but only four of them could reach the semifinals.

Ikodinovic underlines that water polo has many respectable teams today, but he adds:

-I think that the road to the medals 15 years ago was a little bit harder than today. In the early 2000s, besides the teams that are favorites now – Italy, Spain, Croatia, Greece, Hungary, Serbia, and Montenegro (which was one team), we had a strong team of Russia, that won two Olympic medals at the beginning of the century. Australia, the USA were very closer to the top than now. The Netherland, Romania.. were able to make problems to favorites.

In Ikodinovic’s opinion, the golden era of water polo was a period before his generation entered the stage.

-The biggest rivalry in water polo was in the late ’80s and the early ’90s. There were many medal contenders at the tournaments for the national teams, as well as in the clubs’ competition. The players were paid very well. Still, everything I said doesn’t mean that I think that the water polo competitions aren’t strong now. There are always at least three-four teams, that are favorites for the gold medal. It isn’t easy to win the medal, especially the title.

Serbia dominated European and World water polo since 2014, but it couldn’t retain the European title this year.

-Serbia isn’t dominant as it was. I wouldn’t analyze the reasons for that. Still, I am sure that the Serbian team would reach the semifinals at the Olympic Games if the situation in the world is normal, and the Games are this year. But, we have to wait 2021.

In 2019, the new rules were implemented in the water polo game.

-I like new rules, we got a faster game. But, the same problem with the regulations remained. There is too much space for the referee’s free interpretation of the rules. The players often don’t know why the referee made a decision he made. If the players and the coaches are confused after some of the decisions, how can spectators understand the game? If these problems are solved, water polo will become more popular.

After ending the playing career, Ikodinovic didn’t leave water polo. He was the general manager of the Vojvodina. Since 2018, he has been the vice-president of the Assembly of the Water Polo Federation of Serbia.

– I was offered to take a more responsible role, even to become the president. But, I wasn’t interested in that, since I had a private business. I accepted to join the team of the Serbian Water Polo Federation. The organization is guided well by my former teammates (Viktor Jelenic is the president, Dejan Savic is the head coach…). I never taught about the coaching job, but if the whole situation in water polo gets better, I will maybe, accept some managing job.

For the end, Ikodinovic underlined:

-Stay home, be careful. If we are responsible, the current hard situation will be ended.