Spain find themselves top of Group A after dispatching South Africa with ease, while the other game in the group saw the gold medalists from Sydney 2000, Australia, get the better of Canada. The reigning champions, USA,  are unsurprisingly top of Group B after a typically dominant brushing aside of hosts Japan. ROC just managed to get a result against a very lively Chinese side, which takes them second on goal difference.

In the day’s most intriguing contest, Australia edged out Canada thanks to a hat-trick from Bronte Halligan.

Australia, who it’s fair to say have not had that much match-practice leading into these games, looked physically strong and fit, whilst the ever-improving Canada looked leggy and narrowly off the pace.

The opening quarter was a cagey affair, to say the least. Bronte Halligan’s cross cage shot from the right was cancelled out at the end of the quarter by Canada’s left-hander, Kyra Christmas.

Australia appeared to have pulled away in the second period with three unanswered goals: a powerful shot from Abby Andrews, a hugely deflected shot from Bronwen Knox and another from Halligan. However, two goals in less than a minute from Canadian skipper, Monika Eggens, put Canada back in it. Canada thought they’d outridden the Australian onslaught when Rowie Webster missed a penalty, but Zoe Arancini’s delicate lob with ten seconds left in the half gave Australia a two-goal lead.

Bronte Halligan grabbed her third goal in as many quarters with a sublime leaning, far-post shot, that kept Australia ticking over. 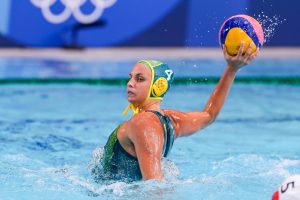 Eggens then grabbed her third of the game for Canada with just over two minutes left in the game to give her side hope of a comeback, but the Aussie Stingers captain, Rowena Webster, put the game beyond Canada’s reach with ninety seconds to go to make it 8-5.

This result, although not disastrous for David Paradelo’s side, will mean the pressure is on for them to avoid playing USA, Hungary or ROC in the quarter-finals – especially if they lose their next game against Spain on Monday. Meanwhile, Australia will want to keep the momentum from this game, going into their clash with the Netherlands (also on Monday) in what is shaping up to be a tasty contest.

Spain cruised to victory in their first game of the tournament against a young and spirited South African side.

The first period was reasonably close. Roser Tarrago and Elena Ruiz both netted twice in the first quarter for Spain, whilst Chloe Meecham and Ashleigh Vaughn converted for the South Africans. 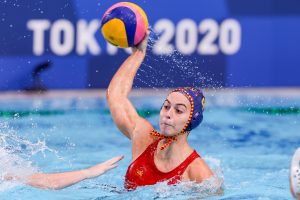 However, the gulf in class and experience was made evident in the second quarter. Judith Forca converted three, whilst Anna Espar netted twice. Leiton and Ortiz also joined in on the action of getting goals, with earlier scorers Ruiz and Tarrago also registering goals in the second period. To South Africa’s credit, the goal they did get in the second quarter courtesy of Jordan Wedderburn, was a fantastically taken centre-forward shot under severe pressure.

But that was nowhere near enough to trouble Miki Oca or his very talented Spanish side. They would win the second half 15-1.

The victory takes Spain top of Group A, just above Australia on goal difference. The Spanish will certainly face a tougher test against an already defeated Canada on Monday, whilst South Africa’s next game is also against Canada on Wednesday.

The USA made sure there were no unexpected slip-ups in an opening game blow-out against tournament hosts Japan. Adam Krikorian’s side were unapologetically ruthless in spoiling the host’s party, with five goals apiece from Maggie Steffens and Stephanie Haralabidis. The Americans looked in great shape, albeit in a game that the tournament favourites were fully expected to win.

It looked momentarily like Japan were in the game when they clawed back a three-goal deficit in the first four minutes to level the scores at 3-3. However, two goals from Maddie Musselman, as well as scores from Aria Fischer, Steph Haralabidis and Maggie Steffens made the score 8-3 after the first quarter. 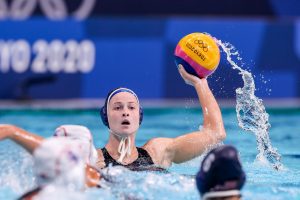 From there, the USA never looked back, scoring eleven unanswered goals. Japan finally scored a fourth goal thanks to a tidy conversion in the pit from Miku Koide, but it was barely a consolation.

Maddie Musselman continued her good form this year with four goals, whilst keeper Ashleigh Johnson made an impressive fifteen saves.

Steffens’ five goals in the match now take her only five away from the all-time Olympic goal-scoring record currently held by the great Italian player, Tania Di Mario.

Up next for both teams is China. The United States face them on Monday, whilst the host’s Japan have a four-day break to regroup before they face their close Asian rivals on Wednesday.

We were treated to a rollercoaster of a game between China and ROC with both teams looking like they were going to score every attack. It’s regretful that we can only imagine how a packed Olympic crowd inside the Tatsumi would have reacted to the end-to-end spectacle that they would have been treated to.

Xinyan Wang started in formidable form – converting three goals from three shots in the first period. Lin Peng, China’s keeper pulled off an amazing penalty save from Elvina Karimova to give her side a narrow 6-5 lead into the second quarter.

Guannan Niu converted two goals in the second quarter for China – both thundering off the far right post and in off Evgeniia Golovina’s goal. ROC, however, managed to stay level thanks to goals from Vakhitova and Timofeeva.

China, however, managed to pull ahead thanks to a ROC’s own goal.  The unfortunate circumstances for ROC came from captain Ekaterina Prokoyeva when a shot from Jing Zhang ricocheted off the post before hitting her on the back of the head before beating her substitute keeper, Anna Karnaukh. 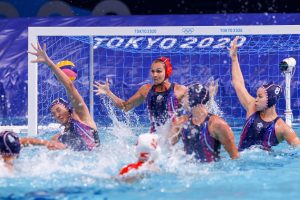 China went two goals ahead in the third, but they couldn’t pull away further from ROC, who levelled the game at 11-11 again. Finally, ROC took the lead for the first time thanks to a low bouncing shot from Evgeniya Ivanova, before a long-range, cross cage shot from Ekaterina Prokofyeva gave ROC a two-goal cushion.

VAR then confirmed that Xiao Chen’s shot had crossed the line before Huan Wang made full use of Petar Pobovic’s timeout to level the scores 14-14.

However, when the game was levelled at 16-16, two goals from one of the best players in the world, Ekaterina Prokofyeva, stepped up and took ownership with two outstanding goals. It looked all over for China and although Xiohan Mei’s rocket from 7m gave China hope, it was not enough to seal the points. Prokofyeva’s class was the only difference between the teams.

China, who played excellently, will feel this was a big chance missed to gain some much-needed points. However, they may feel after today that they could pinch points off some of the other teams in the group – probably not the USA though, as they face them next on Monday. ROC will face Hungary – who are yet to play.