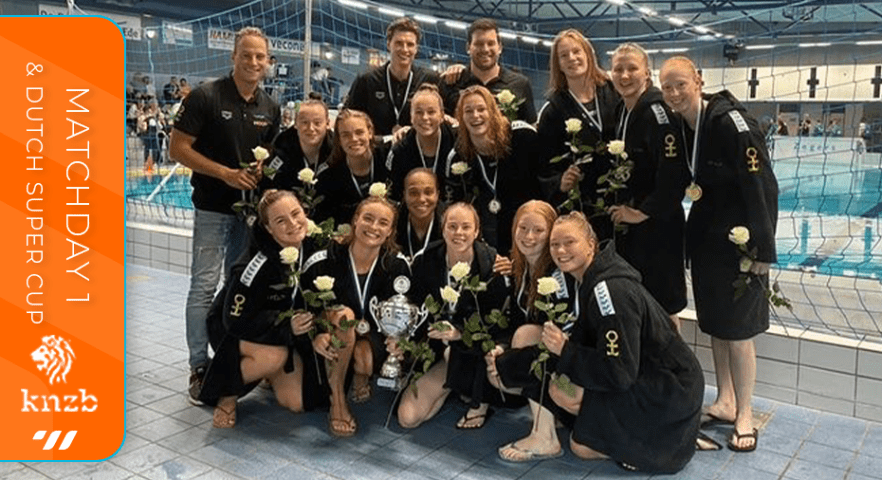 Women’s water polo in the Netherlands made its long-anticipated return, as the Dutch Super Cup Final and three league games took place over the weekend.

In the Cup Final today, De Zaan beat the champions from the previous season, the Polar Bears, with little trouble. Mick van den Bree’s team looked impressive in the final, as well as in their first league game the day before against ZVL, a game they also won.

Meanwhile, in the other league games on Saturday, Het Ravijn saw off PSV, while Brigit Mulder secured her first win as UZSC coach against De Ham.

ZV De Zaan won the Dutch Super Cup by defeating the Polar Bears. De Zaan played well today and sent a message early in the season by beating a title rival convincingly, in a cup final no less.

Zaan started well, taking a 3-0 lead, with Koopman, Roijen, and Bente Rogge hitting the target midway through the first period.

The young Feline Voordouw of the Polar Bears, who scored an early hat-trick in the second period, led the Polar Bears’ efforts to regain control of the game. But Zaan had a solution for every problem that arose, stifling the champions’ momentum.

The killer sucker-punch came early in the third period, when a double from Maud Koopman and a further score by Maxine Schaap put Zaan out of sight (4-10).

De Zaan got off to a winning start in the Eredivisie, but they were pushed hard by ZVL-1886. Mick van den Bree owes much to his skipper, Lieke Rogge, who netted five times in the match.

Renee de Kleer also netted five in the game for ZVL, but a dip in their performance in the second half cost Lefke van Belkum’s team the points.

The score was tied at 5-5 in the second quarter, but Renee de Kleer 2, Anna Pauli, and Duchanka Kammerman scored four consecutive goals to give ZVL a 9-5 lead.

De Zaan showed great spirit, though, and turned the game around in the third quarter, led by a brace from Dutch international Maxine Schaap (10-9). Into the last, the two Rogge’s secured the victory; Lieke scored twice in as many minutes before Bente sealed the deal.

Het Ravijn started their Eredivisie campaign with a win against PSV. In the first eight minutes of play, Dian Scholten scored twice to give Ravijn a 3-1 lead. She then scored twice more in the final period to ensure her team’s 12-6 victory.

UZSC won their season opener at De Ham, although they had to do it the hard way, by coming from 3-0 down in the first quarter.

De Ham built their lead thanks to a double score from Amy Rozemeijer that sandwiched a Rachelle Steur finish. But UZSC replied with five consecutive scores (Drewes 2, Jutte, Maafi, Haksteen) to turn the momentum in the match.

While Rozemeijer completed her hat-trick, UZSC once again went on a scoring spree in the third period, scoring five goals to create a three-goal advantage (10-7). Two more goals from Nerida Drewes, who converted five times in the contest, secured the three points

Read more about the Dutch Eredivisie