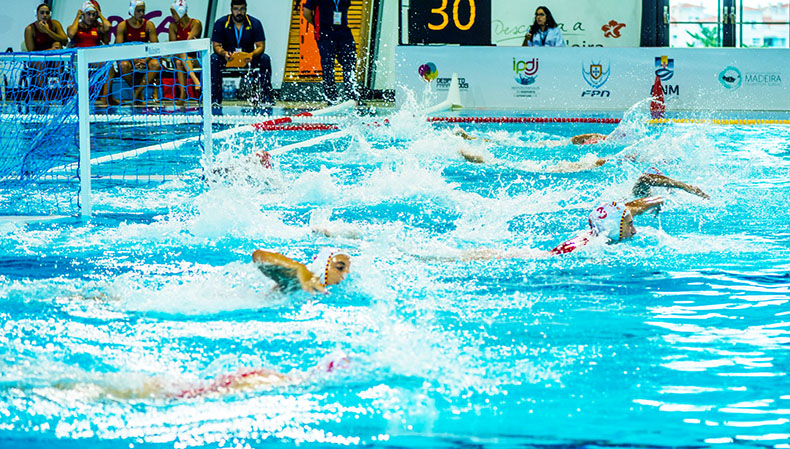 Four-time champion Sabadell (ESP) and 2015 champion Olympiacos (GRE) are on their way to the Final Four after gaining decisive away wins respectively. Title- holder Kirishi (RUS), on the other hand, faces a tough return leg while UVSE (HUN) and Padova (ITA) played a tie, just like a year ago.

The big game of the day featuring two of the last year’s F4 participants brought a brilliant battle in Sicily. Record-holder champion, 8-time winner Orizzonte quickly jumped to a 2-0 lead but Sabadell hit back with five straight goals and kept the game under firm control ever after. At the beginning of the fourth they enjoyed a five-goal lead at 5-10, the Italians fought hard but had to settle to a 9-12 loss.

Newcomer Sant Andreu could only keep on with Olympiacos in the first period after that only the difference remained in question. The game ended in a rout so the Greeks are set to return to the finals after missing the cut last year.

With 1:27 to go in the first, winner of the last two editions Kirishi already faced a mountain to climb as Vouliagmeni took a flying 1-5 start. The Russians showed their quality, however, in a span of 5:37 minutes they equalized but the Greeks were up to the task and with 2:00 minutes to go in the third they were still 8-10 ahead. But in the last 10 minutes, they were unable to score and Kirishi managed to turn the match to gain a single-goal advantage.

UVSE and Padova have usually been entangled to balanced matches, two years ago the Hungarians won by one goal in the LEN Trophy final, last season they met in the same stage and the first leg ended in a 7-7 tie. This time it was another draw: the Magyars played better in the first half and led 4-2 but the third period was a shocker for the hosts as Padova netted three unanswered goals and added another one for a 4-6 lead early in the fourth.

UVSE managed to tighten its defense, shut out their rivals for the remaining 7:16 minutes, killed a 4 on 6, and even though missed a couple of extras, they could save the game to a tie with a goal from Rita Keszthelyi with 0:03 to go. A year ago the Hungarians could win in Padova, it’s yet to be seen if they could repeat that feat.