Almost each of the finals at the major competitions in the water polo history was a big battle. The games in which one team dominated happened rarely.

Our new article about the history of this beautiful game is a story about the epic finals which were decided after the overtime period(s) and in the penalty shootouts at the Olympic Games and the FINA World Championships.

The first big water polo final in which the winner was determined after the additional time was the clash for the Olympic title in Amsterdam 1928, Germany – Hungary. At that time, the duration of the game was two halves of 7 minutes. After the first half, Hungary was leading 2:0. In the rest of the final, Germany kept Hungary scoreless. The Germans leveled the score in the second half (2:2), while they netted three unanswered goals in the overtime period for a 5:2 win. 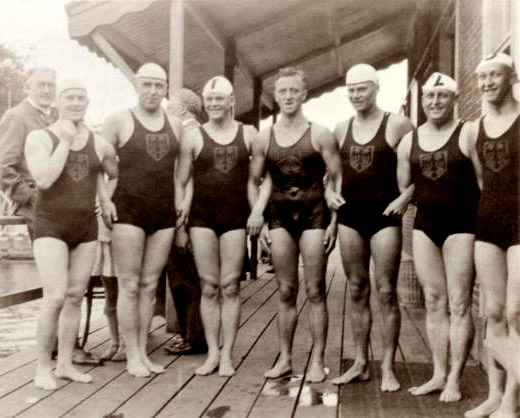 After the 1928 Olympic Games, the International Olympic Committee and FINA changed the competition formula. There were no medal matches. After the preliminary round(s), the teams were battling for medals in the final group (a round-robin competition)

Before the 1968 Olympic Games in Mexico City, the regulations were changed again. After the preliminary stage (15 teams were split into two groups), the top two squads from each group qualified for the semifinal.

Yugoslavia and USSR reached the final match. Each of the teams was seeking its first Olympic gold.

The duration of the game was 20 minutes (four quarters of five minutes of actual play).

USSR had a 3:2 lead after the first five minutes, but from the second quarter, Yugoslavia took control. The Yugoslavs equalized by halftime (5:5), and built a 3-goal advantage (9:6) in the fourth period. The Soviet Union managed to level the score four seconds before the end of the quarter for 11:11, and the game was continued with the extra-time period (two three-minute periods).

Yugoslavia secured the win with two goals from penalty shots in the first three-minute period – 13:11. 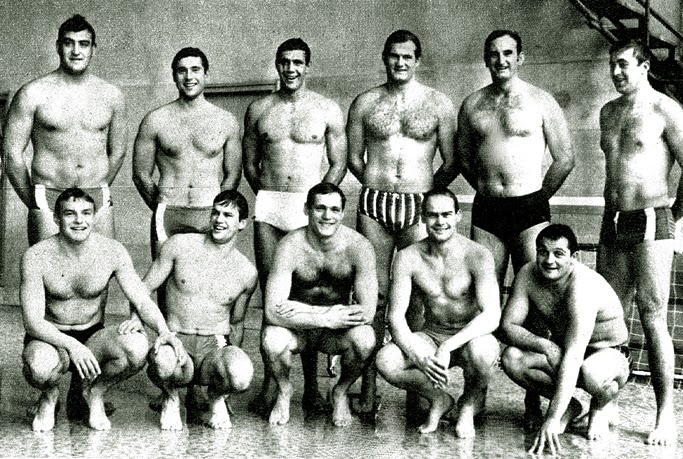 Even 20 goals in this game were scored from penalty shots (from 4 meters). USSR scored all 11 goals from penalties, while Yugoslavia netted four action goals. A large number of penalty shots were caused by a rule which was introduced a year earlier. In 1967, the “penalty rule” was introduced – upon every major foul, the team received a penalty point. After every third such point, the referee awarded a penalty to the opposing team.

Later, that rule was erased from the FINA regulations.

The next final that was decided in the overtime was the encounter between Yugoslavia and Italy at the 5th FINA World Championships in Madrid in 1986.

The match Yugoslavia – Italy in Madrid turned into the longest-ever final game at the Olympic Games and World Championships. The battle lasted 52 minutes! Four quarters of seven minutes and four overtime periods (eight three-minute periods) were needed to determine a winner. The match started at about 10 pm, and it was ended after midnight.

Italy built a substantial 4:1 advantage in the first two quarters, but Yugoslavia managed to come back after the middle break, and the score in the regular time was 7:7.

Yugoslavia was leading 9:7 in the first overtime period, but Italy leveled the score – 9:9 and secured an additional six minutes of battle. There were no goals in the 2nd extra-time period. The third was also ended in a tie – 1:1, while Italy had an 11:10 advantage before the 8th three-minute period. The Yugoslavs earned the gold medal with two goals in the finish. Igor Milanovic ended a drama by scoring a last-gasp goal, just 0.3 seconds before the buzzer.

The last Olympic tournament played by a round-robin system was held in Los Angeles in 1984. Yugoslavia won the gold medal, ahead of the USA. Both teams collected 9 points each in the final group (4 wins and a draw). Since their encounter was ended in a tie (5:5), the goal-difference decided a winner. Yugoslavia was better by that criteria (it had +14, the USA had +9).

Yugoslavia and Team USA faced off on Day 1 of the preliminary round of the 1988 Olympic Games in Seoul. The Americans recorded a narrow 7:6 victory.

However, both teams reached the final game, and Yugoslavia had a chance for revenge. The USA had a better start and led 4:2 at halftime. Yugoslavia equalized in the third period (5:5). The rivals scored a goal each in the last period. After the regular time, the score was 6:6, and the game went into the overtime.

Yugoslavia was better in the first three minutes of the additional time and earned an 8:6 lead. Early in the second half of the overtime, the Yugoslavs jumped to a 9:6 advantage, and everything was decided. The Americans scored just a consolation goal.

Yugoslavia didn’t participate at the 1992 Olympic Games in Barcelona, because the country dissolved. So, the world was waiting for a new Olympic champion.

Italy and Spain advanced to the gold medal match.

That was their second clash at the Barcelona Olympics. They shared the points in the group stage (9:9).

The final encounter was very similar to the previous one. After the fourth quarter, the rivals were tied – 7:7.

Just 42 seconds before the end of the first overtime period, Spain gained its first lead in the match – 8:7, by converting a penalty. But 21 seconds later, Italy equalized, and the thriller was continued. There were no goals in the next six minutes. Nobody could find the net in the first half of the third overtime. Finally, 32 seconds from the end of the third extra-time period, Fernando Gandolfi hit the back of the net for Italy’s 9:8 victory.

After 46 minutes of a hard battle (four quarters of 7 minutes and three overtimes of 6 minutes), Italy clinched the gold medal. 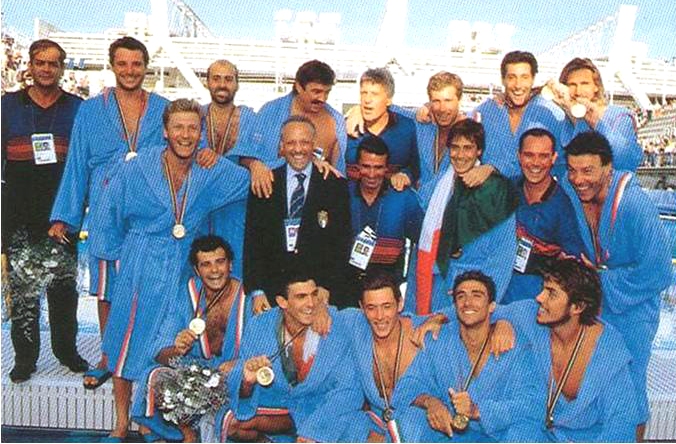 Yugoslavia didn’t defend the gold medal from Seoul, but one man continued his golden streak. Italy’s head coach was Croat Ratko Rudic, who coached Yugoslavia in the ‘80s and led the Yugoslavs to the Olympic titles in 1984 and 1988. But Barcelona wasn’t the end of Rudic’s magnificent Olympic story since he won four golds with three different teams. Rudic guided Croatia to the Olympic title in London 2012. As a player, he clinched the Olympic silver in Moscow in 1980. He was among the candidates for the team of Yugoslavia, which played at the 1968 Olympic Games. But, he didn’t play because he was injured before the tournament.

Women’s water polo was introduced in the Olympic program in 2000.

Only in Athens in 2004, the overtime period was played in the final.

Host Greece and Italy faced off in the final. The match was a hard battle. The teams scored seven goals each in the regular time. After the first half of the extra time, the result was 9:9. Italy scored the only goal in the last three minutes for a 10:9 victory. 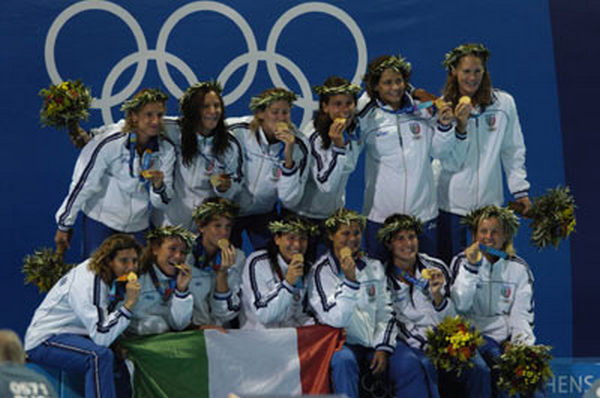 The extra time period was played in the women’s final of the 2005 World Championships in Montreal.

Hungary defeated the USA after a few twists and turns. The Hungarians dominated the first two quarters, and they were 7:3 up at halftime. But, the Americans kept Hungary scoreless in the third and the fourth quarter and managed to equalize – 7:7. However, in the overtime period, the Americans couldn’t find the net, while Hungary scored three goals for a 10:7 win.

The Croats clinched the world title in Melbourne 2007. In the final, they beat the reigning Olympic champion Hungary.

The game was an even contest. During the first three quarters (in the 2000s the duration of the quarter was increased from 7 to 8 minutes) the distance between the sides was never bigger than a goal.

Hungary gained a 2-goal advantage (7:5), five and a half minutes before the end. The Croats responded (6:7), while the crucial moment was Hungary’s counter-attack three minutes from the end. The score was 7:6 at the moment, and the Hungarians had an excellent opportunity to secure the gold medal. But, Croatia’s goalkeeper Vican saved Szivos’s shot from a counter-attack. Immediately after that, Jokovic found the net for 7:7. That was the result after the 32nd minute.

Croatia’s Markovic was the first one who scored in the overtime (8:7). Kiss replied. After Markovic’s second goal in the second half of the extra-time period, the Hungarians had no answer. 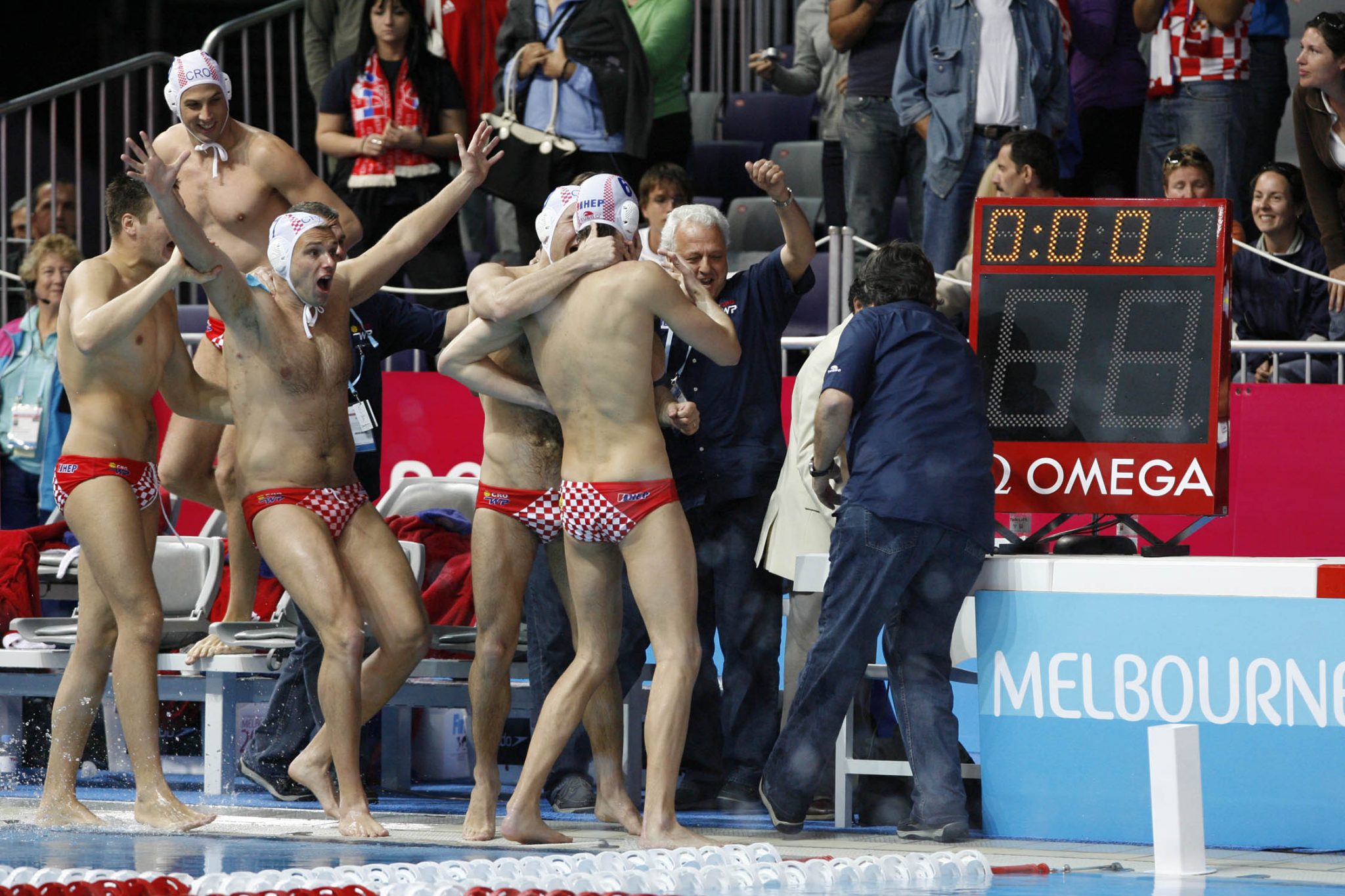 Early in the 21st century, FINA approved a new rule. If at the end of the two three-minute periods of the extra time the score is equal, a penalty shootout will determine the winner.

For the first time, a penalty shootout decided the World champion in Rome in 2009.

Serbia and Spain battled in the final. Before that game, the two teams had already met on Day 1 of the group stage. Spain won 11:9.

Serbia led for most of the time of the final game. Three minutes before the end of the fourth quarter, the Serbs were 6:4 up. But, Garcia (who plays for Croatia now), netted two goals in the finish of the period to equalize. Just 11 seconds from the end, he secured the additional time with a goal for 6:6.

In the first three-minute period, both sides scored a goal each. Nobody found the net in the next three minutes, and the match went into a shootout. Even nine series of penalty shots were needed to determine a winner. In the 9th series, Serbia’s goalkeeper Soro saved a shot from Mallarach. On the other side, Aleksic sent the ball home for a 14:13 victory. 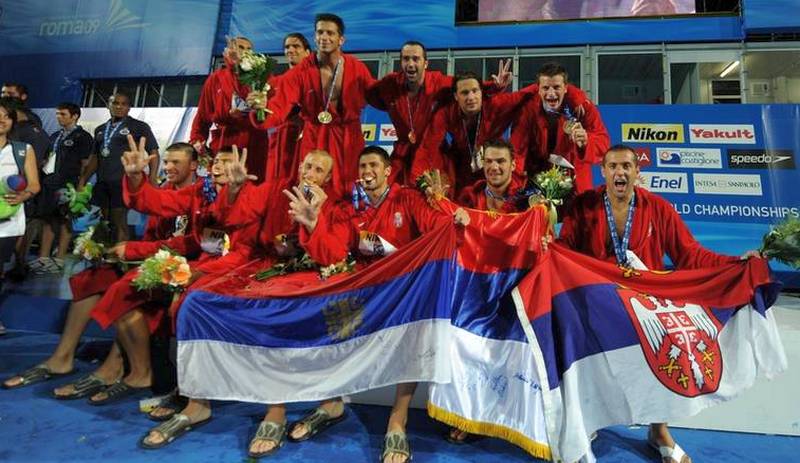 (Serbia had only 12 players in the team in the final, as well as almost during the entire tournament. After the 1st match, Stefan Mitrovic got ill and he returned home. FINA didn’t allow a substitution, so from the 2nd round until the end, Serbia had 12 players)

The defending champion Serbia played in the final at the 2011 World Championships against Italy.

Midway through the third quarter, Serbia had a 3:2 advantage. However, Italy scored three consecutive goals by the end of this period and entered the fourth quarter with a 5:3 lead. They kept a 2-goal distance by the middle of the fourth period (6:4). Still, the Serbs managed to level the score, and the big rivals continued to battle in the additional six minutes. Italy earned a crucial advantage in the first half of the overtime period – 2:1.

One of the heroes of the win was Italy’s goalkeeper Stefano Tempesti, who saved two penalty shots, while he collected 16 saves in total. 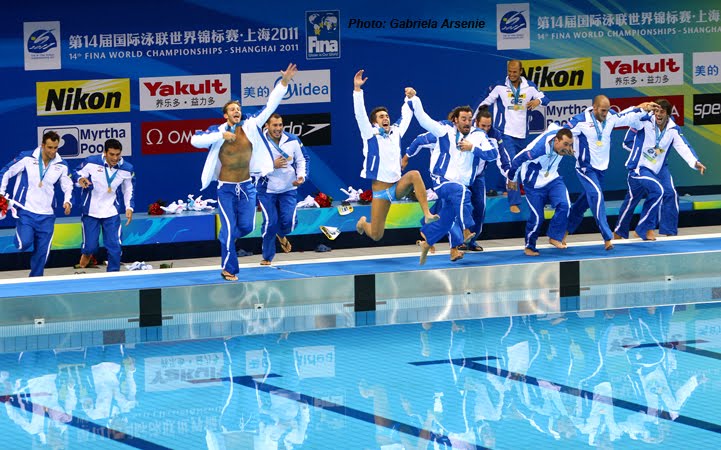 The final in Shanghai was the last one with the overtime periods. Two years later, FINA eliminated the extra time. From that point on, in the case of a draw after 32 minutes, the game is going directly to a penalty shootout.

Since 2009 none of the Olympic and the finals at the Worlds hasn’t entered into a shootout.