The draws for the Final Four tournaments of the LEN Euro League and the LEN Trophy were held in Rome today.

Besides, the draw for the semifinals of the LEN Euro Cup, also, took place in the capital of Italy, but the semifinalists will be known tomorrow, after the 2nd leg of the quarterfinals

The final and the third-place match are on May 1.

There are no derbies at the Final Four. All four clubs arrive in Budapest eager to win the title.

But, it seems that the encounter between Olympiacos and host UVSE is a little bit tougher match than the other duel.
Olympiacos is the only semifinalist that has already won the LEN Euro League. The Greeks clinched the trophy in 2015. In the same season, UVSE finished 4th at the F4. The Budapest-based side played in the final in 2016 and lost to Sabadell.

After winning the trophy, Olympiacos played at the Final Four three times. In the season 2015/16, the Greeks won 4th place (after a defeat to UVSE in the semifinals). Olympiacos was the runner-up in 2017 and 2019.

Dynamo and Dunaujvaros also have played the final games. The Russians were the runner-up twice (1992 and 2002). Dunaujvaros won 2nd place in 2003. 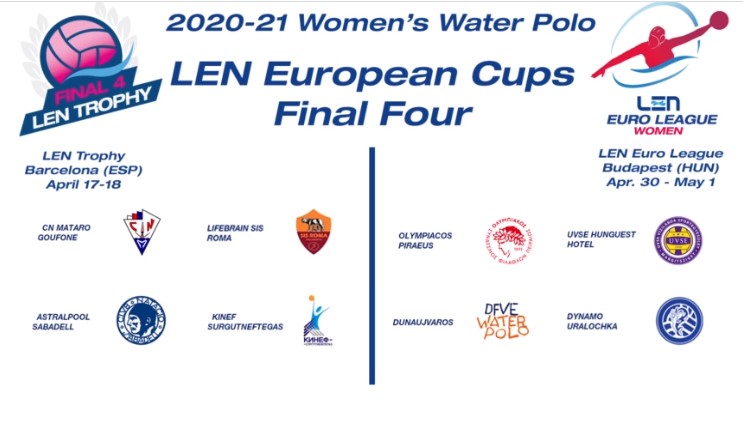 The final and the third-place match will be held on April 18.

Mataro is the only of the four clubs which has already won the LEN Trophy. That happened in the season 2015/16. Kinef reached semifinals twice – the Russians won 3rd place in 2019, and finished 4th in 2014. Sabadell, the outgoing European champion, played at the LEN Trophy F4 once, and finished 3rd (in 2004). SIS Roma will make its debut.

There is a potential Serbian encounter in the semis, but it’s more likely that Hungary will have two clubs in the last four. The final might be an all-Hungarian clash.

The 2nd matches of the quarterfinals will be played tomorrow. OSC Budapest, Crvena Zvezda and Szolnok earned solid advantages last week in 1st leg. Everything is still open in the encounter between Vouliagmeni and Mladost.