Draws in derby games in Barceloneta and Belgrade; Olympiacos lonely atop Group A 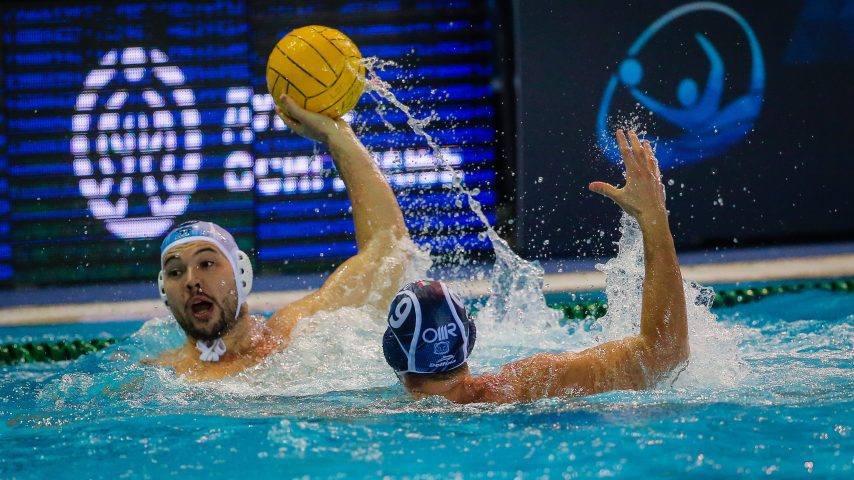 The fifth round of the Champions League Group A offered a lot of excitement. The rivals shared the points in both derby matches.

Barceloneta and Ferencvaros shared the points in Barcelona – 12:12. This was the 4th draw for Ferencvaros in this season.

The other derby, Novi Beograd – Brescia ended in an 11:11 tie. Brescia had a 3-goal lead in the middle of the third quarter. Novi Beograd came back and was very close to a victory, but Brescia saved a point with a last-gasp goal.

Olympiacos, Brescia, and Ferencvaros are still unbeaten. After the 5th round, Olympiacos is lonely atop the table, with 13 points, two more than Brescia. Ferencvaros has only one win so far (against Novi Beograd in the 4th round) and share places 3rd – 5th with Novi Beograd and Barceloneta. Each of the three teams has seven points

The derby in Barcelona was a hard and equal battle between the rivals of similar quality. Barceloneta, which had a huge support from fans in the packed stands, was in front for most of the time, but the distance was never larger than two goals. Ferencvaros played without its first-pick goalkeeper Soma Vogel (who was on the bench during the match and was replaced by Daniel Szakonyi). The Hungarians dictated the pace in the first quarter (3:4). Barceloneta opened the second period with two goals for a 5:4 lead. Luca Damonte converted a man-up for 5:5, but Marc Larumbe, the best scorer of the match, found the net in the 15th minute, and the hosts had a 6:5 advantage at halftime.

Martin Famera opened the second half with a goal for 7:5, and two goals separated the rivals for the first time. Denes Varga responded immediately for 6:7. Barceloneta regained a 2-goal lead twice (8:6 and 9:7). Vendel Vigvari halved the Hungarians’ deficit 39 seconds before the last break. 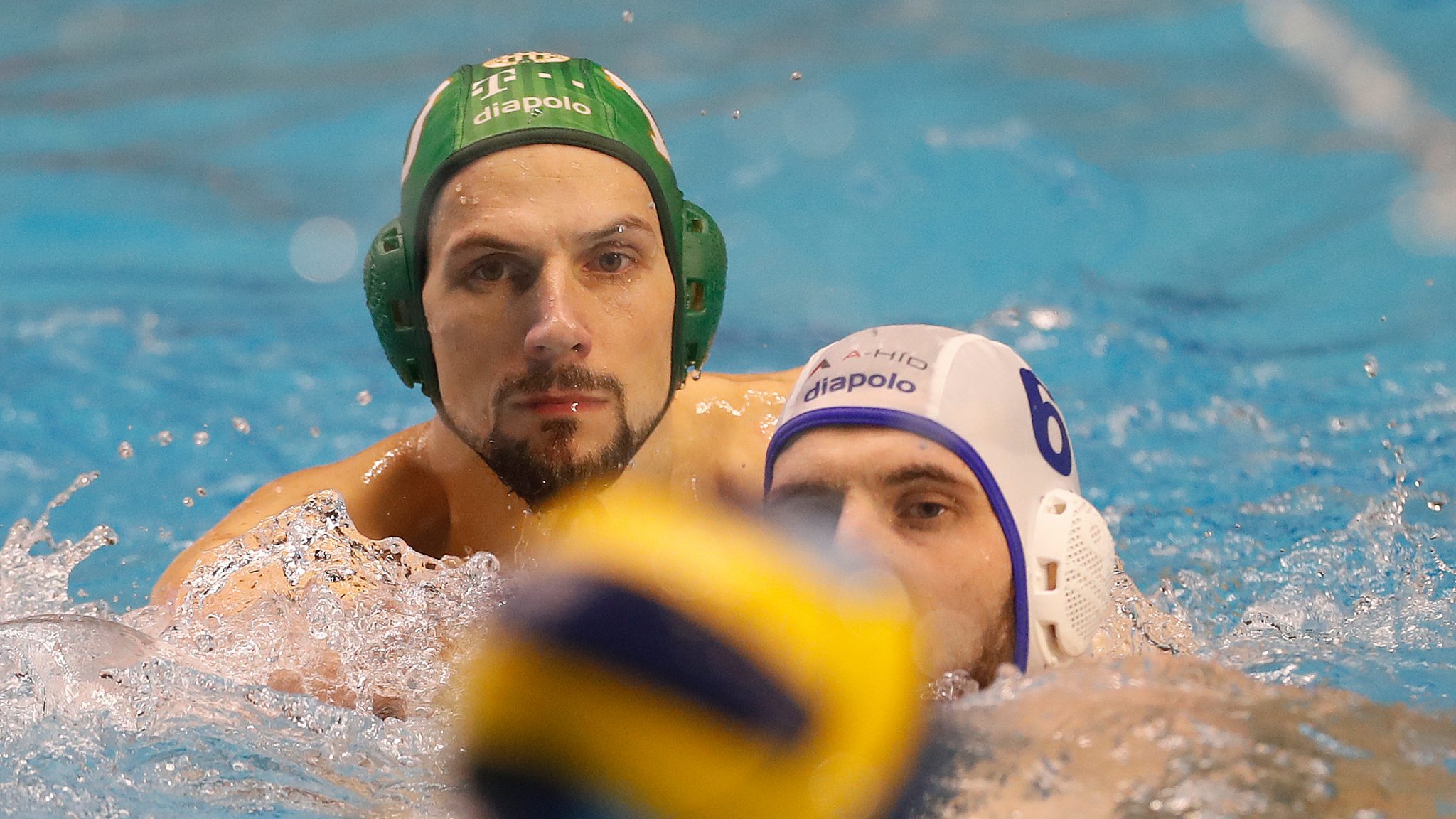 There were no goals in the fourth quarter for a while. Denes Varga broke the deadlock in the 27th minute with a goal in his style – a shot looks simple, but it is tough for a goalkeeper to save. The rivals were tied again – 9:9. Marc Larumbe responded with two action goals and Barceloneta earned a new 11:9 advantage with 02:28 minutes remaining on the clock. After that, Ferencvaros scored two goals with a power-play advantage and caught up with the rival again – 11:11 just 59 seconds before the final buzzer.

But Barceloneta earned a man-up in the next possession. Martin Famera converted it to 12:11. There were 24 seconds left, and the drama wasn’t over. Ferencvaros set a 7 on 6 (goalkeeper Szakonyi joined the teammates). Those tactics gave a result. Daniil Merkulov scored his 3rd goal this evening just two seconds from time, and Ferencvaros saved a point.

Novi Beograd had a slim lead after the first quarter (3:2), but the hosts’ long goalless phase started in the second period. Brescia netted two goals in the early stage of this quarter and took a 4:3 lead. Novi Beograd, which missed several man-ups in the 2nd quarter, had a chance to equalize from a penalty. Still, Brescia’s goalkeeper Petar Tesanovic, who was one of the best players this evening (12 saves), blocked a shot from Drasovic. 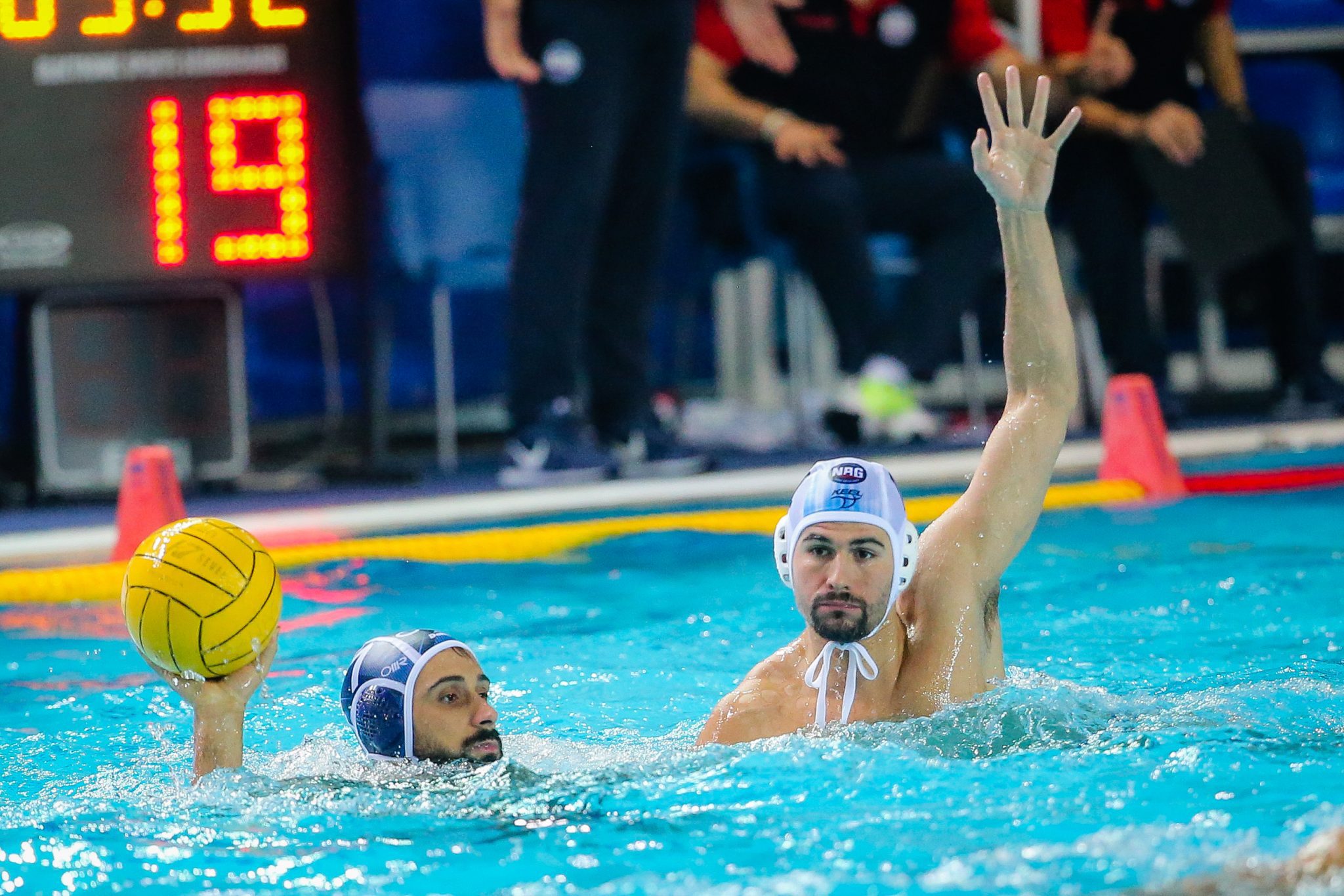 Brescia continued its series with two goals in the third period.  The visitors completed a 4:0 run and went to 6:3 (20th minute). But, Novi Beograd produced a quick comeback. The hosts scored three goals in less than two minutes (S.Rasovic 2 and Vlachopoulos) and leveled at 6:6. Shortly after the equalizer, Brescia’s and Serbia’s center-forward Djordje Lazic gave the visitors a new lead (7:6). But, the older center of the Serbian winning team in Tokyo, Dusko Pijetlovic, replied quickly, and the sides were tied at 7:7 before the last eight minutes. 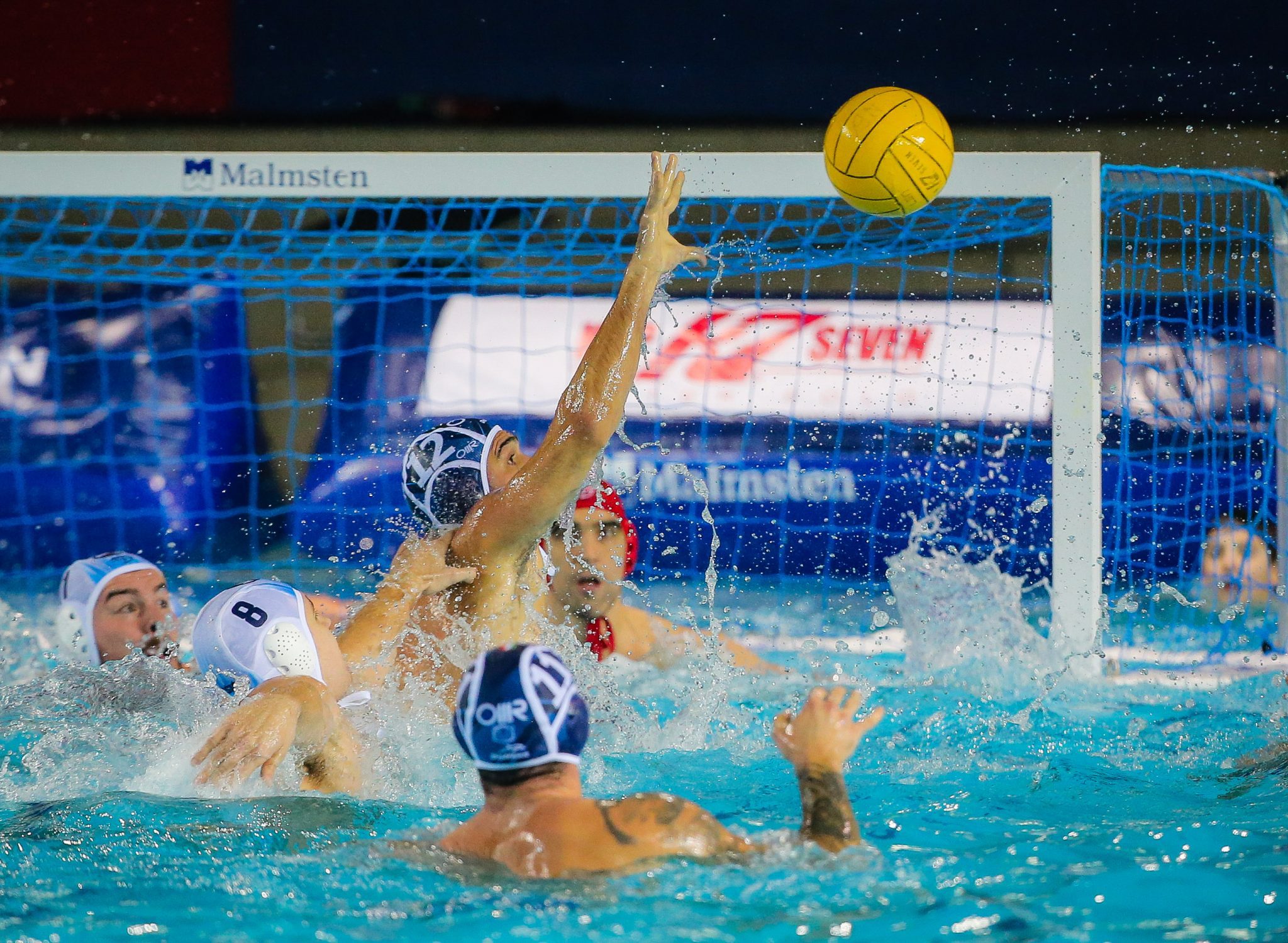 Novi Beograd’s captain Dusan Mandic opened the fourth quarter with two goals for 9:7. Brescia halved the deficit twice (8:9, 9:10), but Novi Beograd entered the final minute with a 2-goal advantage as Mandic converted a penalty to an 11:9 lead in the 31st minute. Still, the Italians managed to earn a point. Luongo netted for 10:11 with 59 seconds remaining. After that, Novi Beograd lost the ball in its possession. Brescia had the last attack in the match and earned a man-up 18 seconds before the end. Gojko Pijetlovic saved Gianazza’s shot from 2 meters just eight seconds before the buzzer. Still, the ball went behind the goal, and Brescia had a new chance after a corner throw. Brescia’s leftie Boris Vapenski (a former member of the Serbian national team, who plays for Georgia now) took responsibility and found the net at 0:05 for the final score – 11:11. Brescia remains unbeaten and in 2nd place in the table.

Olympiacos had many problems with injuries and positive corona tests before the game. Two center-forwards – Mourikis and Kolomvos – and Grammatikos missed the game, while Fountoulis and Chrysospaths haven’t fully recovered from injuries. Jadran played without its most experienced player Niksa Dobud.

However, Olympiacos dominated for almost three-quarters of the game. Jadran proved that it could battle for a spot at the Final Eight in the last ten minutes, but the Croats return home empty-handed.

The Croats scored an opening goal, but the Greeks led 4:1 at the first break. Jadran tried to come back, reducing the gap (2:4, 3:5). However, Olympiacos had a 5-goal advantage already in the 15th minute, after Filip Filipovic’s fourth goal – 8:3.

Filipovic and Fountoulis were Olympiacos’ power engines today. The hosts, led by these high-class goal-getters, controlled the match. Most of the Greeks’ shots were from the perimeter since they played without center-forwards. Fountoulis scored an admirable goal from 7-8 meters in the 22nd minute and stretched the margin to six (12:6). But, It turned out that it was the hosts’ last goal in the match.

Jadran tightened its defense in the last ten minutes. Besides, Olympiacos rashly finished several attacks and gave a chance to Jadran’s goalie, Mate Anic, to prove his quality. Step by step, the Croats started coming back. They cut the deficit to two goals (10:12) in the 29th minute and everything was open again. Jadran was back in the game. Jadran earned a man-up with 01:41 seconds to go. Still, Olympiacos’ goalie Marko Bijac saved Duzevic’s close-range shot, which was the visitors’ last big chance in the match. Olympiacos continued its unbeaten run with 4th victory.

Serbian and Regional League champion Radnicki finally recorded the first win and kept chances of reaching the Final Eight. The Kragujevac-based side is in 7th place, but it is just three points behind the clubs that share places 3rd – 5th: Ferencvaros, Novi Beograd (which is already qualified for F8), and Barceloneta.

Dinamo Tbilisi fought bravely, but the Georgian and the Serbian champion aren’t in the same weight category. Radnicki earned an early 3:0 lead. After the first quarter, the hosts led 4:2, but they entered the second period the same way as in the first – scoring three straight goals. In the 14th minute, it stood 7:2. Milos Cuk was outstanding, he scored three of those seven goals. Nikola Lukic added two. 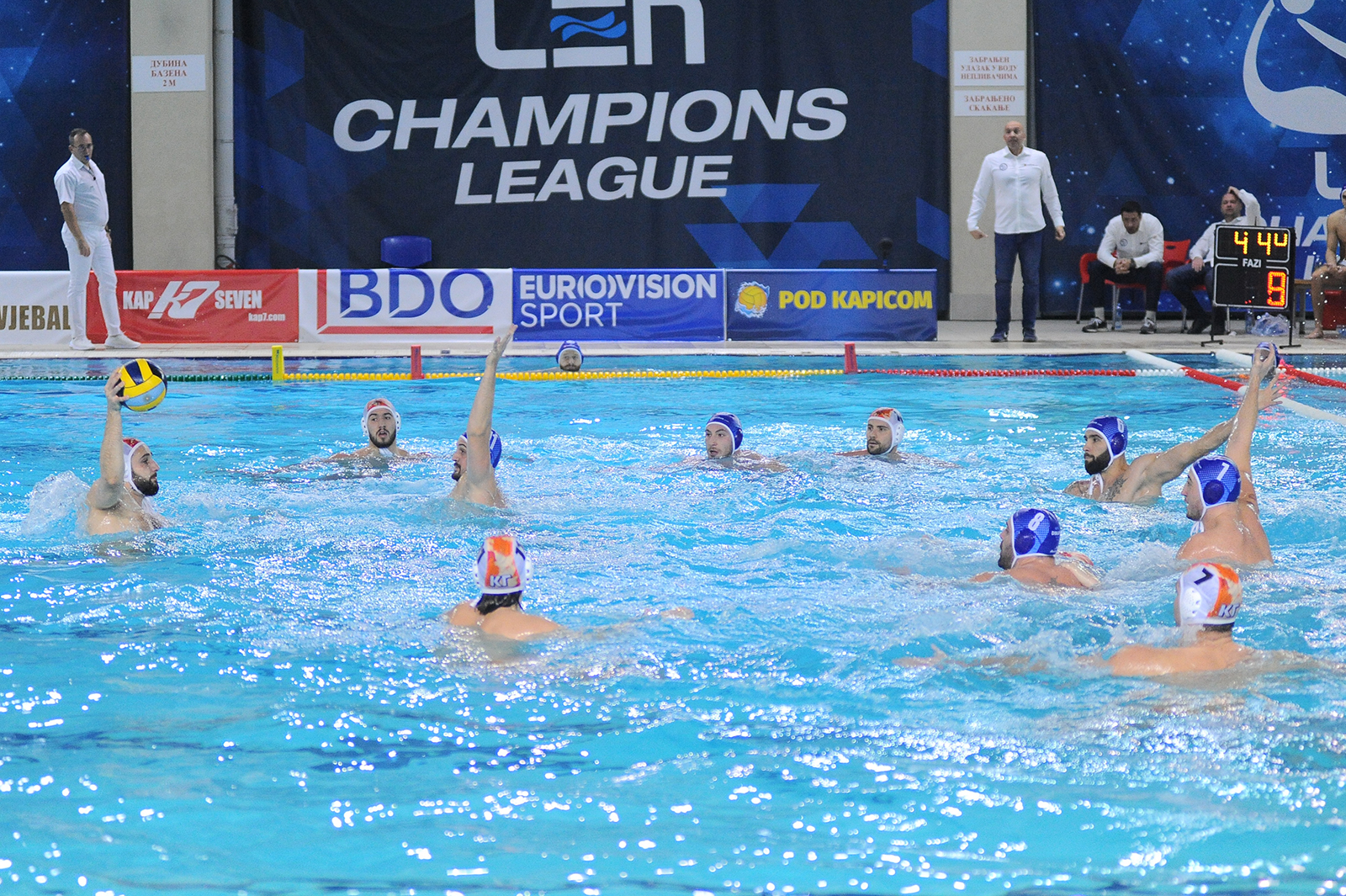 The first two periods determined the rest of the match. The hosts didn’t let Dinamo think it could cause a surprise.