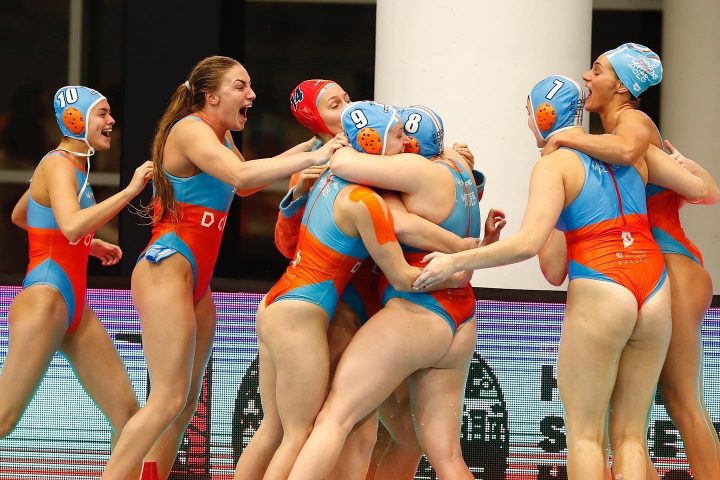 Dunaujvaros have clinched a hugely significant 8-6 victory against UVSE in the last game of the regular season to secure a place in the Championship Play-Offs against the same opponents.

Five goals from Krisztina Garda did the trick for the Orange and Blues –  who were really impressive when it counted this evening. In many ways Dunaujvaros have been very underwhelming in certain respects this season, but as is always the case with the side from Fejer, they have the quality players and tactical nous to compete in any game of water polo.

The game was level after the first period thanks to conversions from Abel-Antal, Garda, Szabo and Macsai, but Attila Mihok’s Dunaujvaros pulled away early in the second period thanks to three goals on the spin; two more for Garda and one for Szilagyi.

The wonderfully talented Kamilla Farago continued to impress this evening for UVSE, adding three goals in the 3rd and 4th quarters in an attempt to give her side impetus.

However, Dunaujvaros held firm, and a finish from Brigitta Horvath in the last knockings was enough to secure the win, and send her coach and team mates into pandemonium.

The result for UVSE is not disgraceful, but it tops off what has been frankly a terrible few days for the Lilacs – who were were  beaten to a 3rd place finish in the Euro League this weekend gone in very strange circumstances. They had a few key absences from the team, including Rita Keszthelyi and Natasa Rybanska. Both play a vital part in Marton Benczur’s team, but the side from Margaret Island would still have hoped for better.

A thought has to go out to Ferencvaros, who will be heartbroken not to feature in the Play-Offs against UVSE. They needed UVSE to beat with Dunaujvaros this evening – something that they couldn’t do. Fradi were in and around the Play-Off places for much of the season, even sitting in 1st for just under half the game weeks.