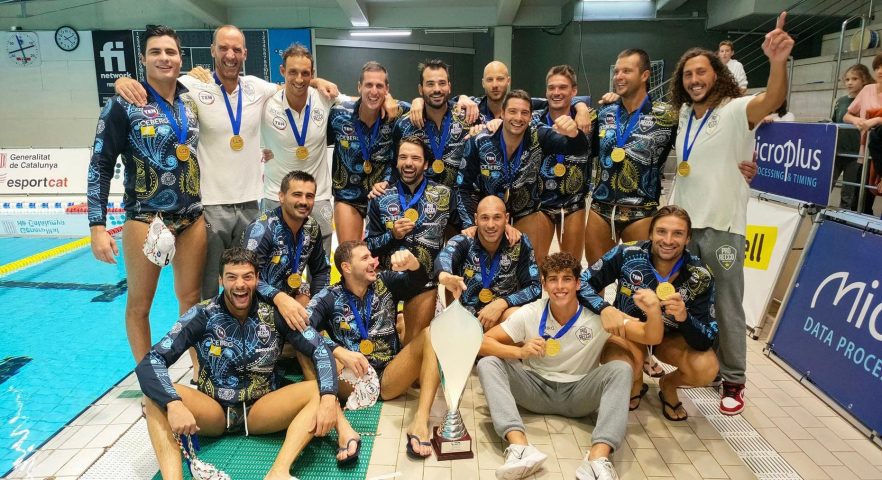 Sabadell, the host of the game, had ups and downs, but it managed to keep up with the favorite until the middle break. Still, Pro Recco secured the win with a dominant 5:0 third quarter.

The Italians set another record. For the first time, a team scored 16 goals in a single game of the LEN Super Cup. The previous record was Recco’s 15 goals in the last season’s triumph over Szolnok (15:4).

Recco won the “Grand Slam”, as it triumphed in all competitions it played in the season 2021/22 – the Italian Cup, the Italian Championships, the Champions League, and the LEN Super Cup. Today’s match formally belongs to the previous season.

Today’s game wasn’t a one-sided contest like the 2021 Super Cup was (Pro Recco – Szolnok 15:4). Still, Recco was always ahead and didn’t leave the decision for the finish of the game.

Sabadell had more good chances to score in the opening minutes. However, the Spaniards wasted three man-ups in three consecutive attacks. And they paid for missed chances. Recco scored three unanswered goals in 02:13 minutes. Fondelli netted from a 6 on 5 for 1:0. Iocchi Gratta made it 2:0 (the only action goal in the 1st quarter), while Cannella gave Recco a 3:0 lead. Sanahuja put Sabadell on the scoreboard with 36 seconds left on the clock in the first period.

Early in the second, Di Fulvio scored for 4:1. In the middle of the quarter, Recco stretched the margin to four (6:2). Still, the European champions finished several attacks rashly, and they started losing their rhythm. Sabadell managed to cut the deficit to two goals (4:6). Di Fulvio scored his second goal – 7:4, but Bernat Sanahuja closed the first period. Just six seconds before the middle break, Sanahuja fired the ball from a distance for 5:7, so Sabadell was still in the game. It was the hosts’ first action goal in the game.

But, Sabadell’s hope didn’t live for long. The Italians opened the third quarter with two quick goals (Figlioli and Loncar). In the 20th minute, Di Fulvio found the net from a close-range shot after an excellent Gergo Zalanki’s assist. A minute and 36 seconds before the last break Ben Hallock scored from a counterattack (Zalanki was an assistant again). In the 24th minute, Iocchi Gratta sent the ball to the net from a tricky lob, Recco went to 12:5 and the contest was over.

“We closed the last season with a trophy, and we opened this season in the same way. We’ll do everything to continue winning. I am satisfied with Pro Recco’s play. We played much better than Sabadell, we proved that we were a stronger team and controlled the game”, Sandro Sukno, Recco’s coach, said. The 2022 Super Cup is Sukno’s fifth trophy on Recco’s bench, after the LEN Super Cup, the LEN Champions League and the double crown in Italy won in the season 2021/22.

Today, Recco won the trophy without captain Aleksandar Ivovic and leftie Gonzalo Echenique, who have been still recovering from surgeries. Centre-forward Matteo Aicardi was missing,too.

Francesco di Fulvio was the first one who lifted the trophy in Sabadell as Recco’s captain. 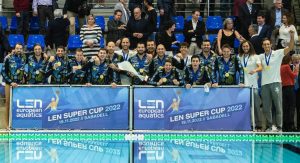