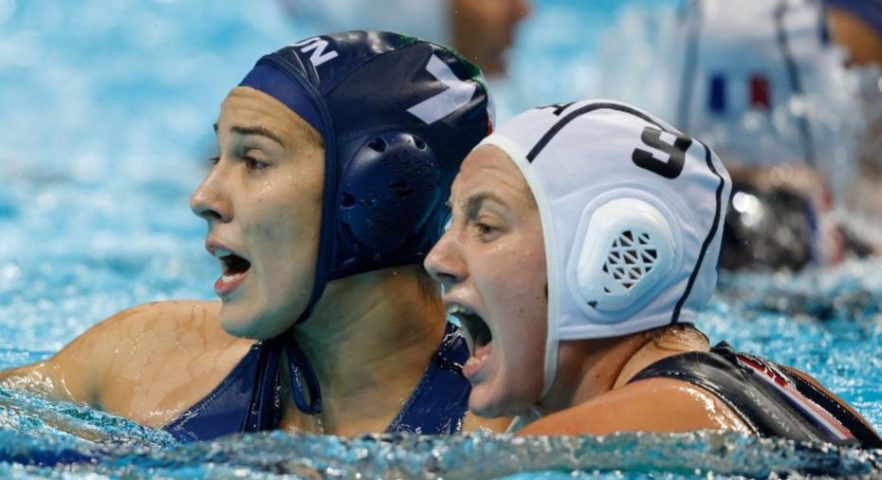 Hungary will face Israel in the 5th/6th play off final after both secured well-earned victory’s this afternoon.

Krisztina Garda scored six goals as Hungary easily defeated France in the first fifth-eighth place semi-final (19-9). France started poorly, and while there were phases in the game where they were competitive, they were still avenues behind being able to concern teams like Hungary.

As mentioned, France showed glimmers of quality, but need to find a was to sustain it for the whole match. Their captain, Louise Guillet, put in a really good performance at centre, providing four goals for her team.

With Israel defeating Croatia 15-8, they have already confirmed their best ever finish; improving on 9th and 10th in the previous two competitions.

It was really a nightmare in the middle two periods for Croatia that were decisive in the match, as the second period saw Israel score four unanswered goals, putting them up by a large enough margin that they would not be caught.

Hungary had the lion’s share of the play in the first quarter, getting out to an early 4–0 lead. It was Rebecca Parkes’ tenth goal in the competition that opened the scoring for Hungary, with a nonchalant no-look finish at centre. Then, two Ferencvaros players, Zsuzsanna Mate and Greta Gurisatti, finished well on the left-side. Dorottya Szilagyi’s penalty made it four at the midway point of the period.

Louise Guillet kicked off the French offence with a 5m penalty, but Hungary kept their four goal lead, 6-2, going into the second; Tamara Farkas’s close-range conversion and Krisztina Garda’s 5m penalty cancelling out a tidy finish on the right by Juliette Dhalluin for France.

The Hungarians scored two goals early in the second period, with Parkes and Garda each adding to their previous strikes. France hit back with two goals. The first, a truly beautiful lob from the Brazilian-born Viviane Kretzmann-Bahia, and a precise hit by eighteen-year-old Ema Vernoux.

But Eger’s Dorottya Szilagyi scored to keep Hungary in the ascendancy, but France hit back with two goals courtesy of Gabriella Fitaire’s composed close-range finish, and a shot from range by Louise Guillet that Alda Magyari fumbled into her own net. The Magyars had double figures before the half was finished – with Krisztina Garda securing her hat-trick.

Louise Guillet added two goals early in the second half, but France couldn’t make any further progress in eating into Hungary’s lead. The Hungarians started to stretch the French, picking them off with scores by Krisztina Garda (2), Leimeter, Mate, Gurisatti and Tamara Farkas. 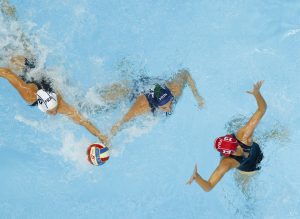 The Hungarians, confident of the victory, slowed down a bit, while France stepped up their game. But the flow of the game was still in the favour of the Hungarians, with the help of a Ferencvaros pedigree; young Dalma Domsodi was found well at the back post by her club teammate, Zsuzsanna Mate, before Dora Leimeter put away her penalty with ease.

Ema Vernoux gave the French a reason to celebrate in the final quarter with an excellent cross-cage shot from the left off the post, but the player of the game, Krisztina Garda, secured her double-hat-trick in the match, firing past Anne Collas from a tight angle.

Croatia started the game well, spurred on by a really supportive crowd. Alijosa Kunac’s side converted two of their first two extra-player attacks; Dina Lordan and Matea Skelin linked up well for the first, before Croatia’s most experienced player, Emmi Miljkovic, fired home from the left.

But Israel got back to 2-2. Firstly, 19-year-old Noa Sasover halved the host’s lead with a wonderful turn at centre, before Israel’s nimble utility player Nofar Hochberg hit a sublime effort from 6m that gave Alexandra Ratkovic no chance.

Maria Bogachenko thought her excellent shot past Ratkovic gave her side a narrow lead at the end of the quarter, but the youngest of the Butic sisters, Jelena (15), saw her shot slip through the hands of Aylet Peres right on the buzzer (3-3).

Having trailed by two goals, Israel suddenly opened up a three-goal lead in the second period. Two back-to-back scores by Panionios’s Maria Bogachenko, and a second score in the match for Nofar Hochberg, put Israel in control.

Croatia were then dealt a big blow, falling behind by a fourth and then a fifth goal. A lapse in concentration by the hosts allowed Loir Ben David to pick out the unmarked Alma Yaacobi in the middle, before Nofar Hochberg, with her third score of the game, continued to be deadly in extra-player moves on the post.

The Israelis continued to benefit from their incisive attacking play in the third quarter, as Maria Bogachenko and Nofar Hochberg both scored their fourth goals of the game. Bogachenko’s fourth goal came on a well-executed man-up play, before Hochberg scored a screamer off the post for 10-4. 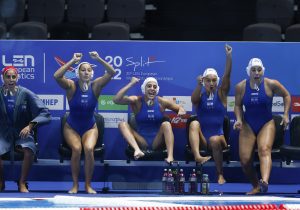 Israel All photos by Total Waterpolo

Croatia did find the net twice more via two precise shots from Dina Lordan, but scores by Noa Sasover, Alma Yaacobi, and Shunit Strugo put the victory for Dimitrios Mavrota’s side beyond doubt even heading into the last quarter.

In the last, Shunit Strugo and Hola Futorian both added two more to the Israeli’s tally. Iva Rozic netted an eighth goal for Croatia, but it was not a consolation.