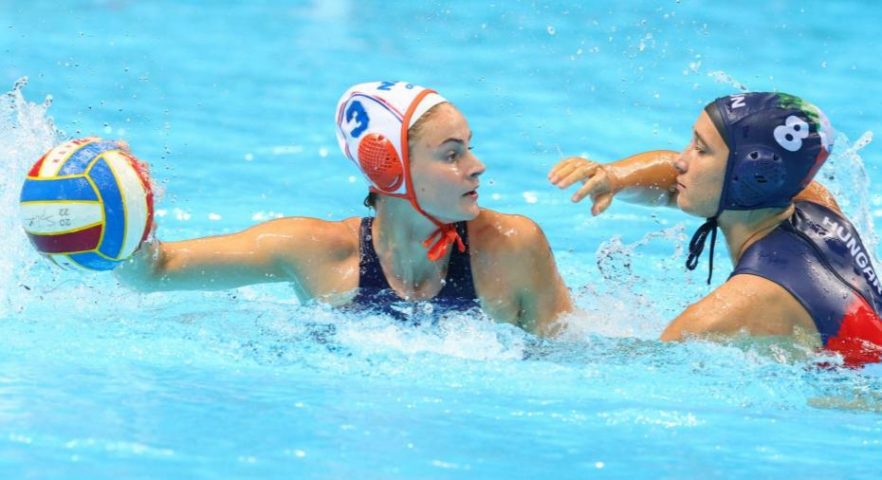 The second day of the European Championships featured some excellent games in the women’s tournament, particularly in the evening session.

Italy were magnificent in their game against Spain, with the Setterosa taking the three points in a 12-9 win. Meanwhile, the Netherlands were in formidable form against the Hungarians; condemning them to a very rare, heavy 13-4 defeat. Both Spain and Hungary will face tough assignments in the final eight of the competition.

Elsewhere, there was a dramatic late win for France against Serbia, while Greece, Israel, and the hosts Croatia secured well-earned points. 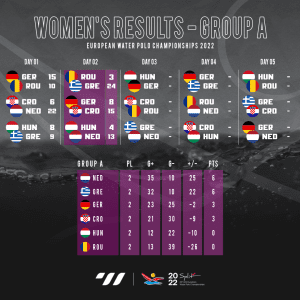 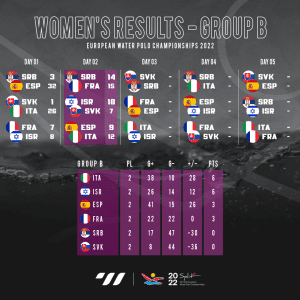 The Spaladium played host to a remarkable game this evening, with the Netherlands outclassing Hungary 13-4. The Dutch were better than the Magyars in every department, and were particularly impressive in matching the Hungarian’s physicality.  Three Dutch players scored hat-tricks (Van de Kraats, Sleeking and Joustra) in a sensational performance in attack as well as defence.

Hungary, on the other hand, look to be in a bit of a slump. Their defeat yesterday might have played a part, but Attila Biro’s side looked totally deprived of any confidence. The second half was a bad as Hungary have played in years. They will probably end up winning their remaining games, but they will certainly find themselves in some real bother when it comes to their Quarter-finals opponents, who will likely be Spain or Italy.

Croatia were spectacular in their game against Germany, in front of a healthy-sized, vocal crowd. Emmi Miljkovic was one of the Croatian heroes today, scoring six times, while Domina Butic, one of four sisters in the team, scored a quad.

Greece were all but untouchable in their match against Romania. Many of Alexia Kammenou’s side enjoyed the chance to boost their stats; Maria Myriokefalitaki scored six, alongside scores from Vasiliki Plevritou (3), Stefania Santa (3) and Foteini Tricha (3)

Italy made a huge statement this evening, beating the reigning European Champions Spain 12-9. It was a wonderful all-round performance from the Italians; with some really entertaining attacking play, especially on their extra-player situations, as well as typically well-organised defending.

The goals were distributed evenly for the Italians. Chiara Tabani secured a hat-trick. Galardi, Avegno, Giustini, Picozzi, Palmieri, Marletta and Cocchiere were the other scorers.

For Carlo Silipo now, it’s all about keeping that level of performance from tonight for the rest of the competition. If they do, they’ll be the team to beat.

For Spain it was a bad evening, but there was nothing necessarily to be seriously concerned about from tonights performance. They reacted well to going several goals behind, even if it didn’t lead to a comeback.  They perhaps could have been more efficient in front of goal, but they will have to accept the better team won on the night.

There was huge drama in yet another game featuring France, although they were on the right side of the result today thanks to a game-winning goal nine seconds from time by Louise Guillet – who bagged four scores in the game.

France deserved to win the match, but were slightly fortunate that Serbia didn’t punish them when their level dropped in the second half. Unlike yesterday against Israel though, they managed to recover from their wobble, although Emilien Bugeaud will be concerned about the pattern emerging from his young team.

Serbia had a real chance to make a statement today against a rival nation of a similar level. But the Serbs were not good enough with the ball. It looked for a moment that they might even win the match going into the last quarter with a two goal lead, but ultimately didn’t have the guile or conviction to follow through.

Israel will be thrilled with the start they have made in Split, with two wins from two ahead of their somewhat ominous upcoming matches against Spain and Italy. Shunit Strugo and Noa Sasover enjoyed the flow of the game, both finding the target four times.