European Championships: Netherlands and Italy progress to semi-finals without trouble 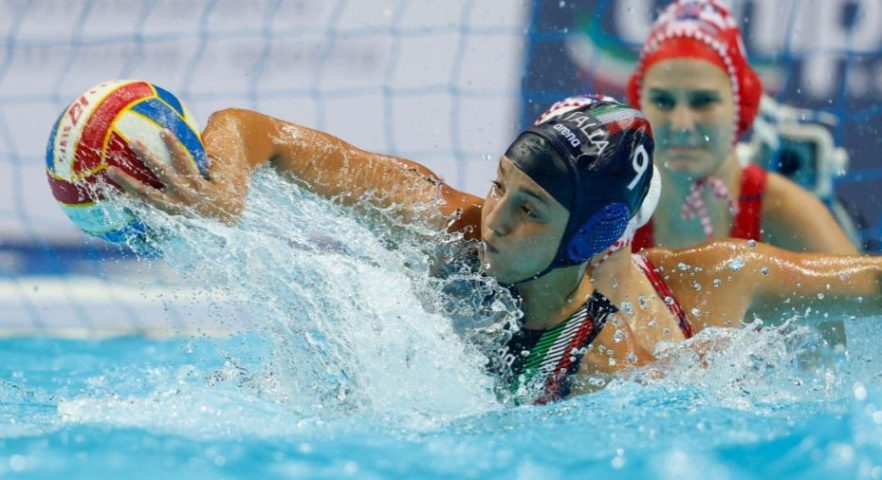 We have the names of the two European Championships semi-finalists in the women’s competition; with the Netherlands and Italy, progressing. Both teams are currently undefeated.

The Dutch smashed France 22-3, while Italy faced slightly stiffer opposition in the form of Croatia, eventually running out 16-8 winners.

The Netherlands outclassed France today, winning by a huge 22-3 margin to progress to their fifth successive semi-final.

It was all very straightforward for Eva Doudesis’ team, in a game that was not really competitive. The French created basically nothing up front and couldn’t cope with the multiple attacking outlets that the Dutch had. While the score was 8-3 at half-time, the Dutch barely moved out of first gear in the second half, but still won, 13-1.

The semifinal opponent for the Netherlands will be decided by the matchup between Hungary and Spain.

The Netherlands were not particularly ruthless in the offensive areas (66% conversion), but had it not been for some fine saves by Anna Collas, the score could have been far worse on the scoreboard for the French.

It is no surprise that the French lost, and the difference between the two teams is clear for all to see. France will target a top six finish but are still a way off being able to compete with Europe’s very best teams.

The Dutch, as expected, dominated play from the first whistle. Simone Van de Kraats scored on her first two shots after sitting out the last game. In between, Fleurien Bosveld hit a beautiful shot past Anne Collas from the middle of the field.

In the second, the French took off thanks to a spectacular effort from the wing by seventeen-year-old Julliet Dhalluin. But no sooner had the French registered on the scoreboard, Rozanne Voorvelt of Cal scored a wonderful lob that dropped over the line off the bar.

The Dutch then proceeded to carve open the French defence, with goals from Sabadell teammates Maartje Keuning and Sabrina Van der Sloot to cap off some swift attacking play to put the Oranges 6-1 up.

The game then saw two converted penalties for either team. After Estelle Millot interfered with play after being ejected, Van der Sloot scored for the Netherlands, while Julliet Dhalluin scored her second of the match, awarded for a good turn by Louise Guillet on Nina Ten Broek (8-2).

The goals kept coming for the Netherlands in the second half, as they stormed to a 7-0 quarter. Simone Van de Kraats added her third on the break, while Maartje Kuening and Kitty Joustra put away quick extra-player strikes. Bente Rogge of ZV Den Zaan put the Netherlands up by twelve, and then Brigitte Sleeking scored her first goal of the match with a late swim to the back post. ANO Glyfada’s latest signing, Iris Wolves, made her mark on the game, just after Fleurien Bosveld added her second of the day.

With the game heading into the fourth quarter, Sleeking doubled her goal total to four. In the final eight minutes, the French mustered very little in the way of a serious attack. Van de Kraats was quick to grab the ball after earning a penalty, taking her tournament goal haul to fourteen. Vivianne Sevenich joined the fun when she made the Netherlands’ third penalty shot of the quarter.

From a French perspective, the only thing to cheer from the whole of the second half was a gorgeously weighted lob by Viviane Bahia, identical to the one produced by Rozanne Voorvelt in the first quarter. 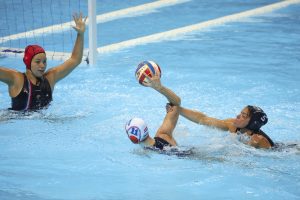 For the first time since 2016, Italy is headed to the semifinals of the European Championship after a straightforward victory over the home team, Croatia.

Croatia competed far better than expected, but they were unlikely to ever pull off an upset against one of the competition’s only two unbeaten teams. The dream of a medal is over the hosts, but they can still battle to finish as high as possible in this competition.

The Setterosa will now most likely face Greece, but this will be confirmed later when they play against Israel in the last game of the day.

Right away, the Setterosa jumped out to a large lead, with the help of three players associated with SIS Roma. Domitilla Picozzi opened the scoring with a ferocious shot that smacked off the crossbar, and then her former club teammate, Silvia Avegno, scored from close range. Following her goal, Avegno switched roles and assisted Agense Cocchiere’s subsequent four-metre strike. Dafne Bettini also hit the mark.

Croatia’s Kiara Brnetic’s right-side shot was good enough to sneak past Caterina Banchelli, giving Croatia the momentum they needed to come back into the game. Domina Butic followed that up with a long-range bar and in to extend Croatia’s deficit to 5-2 at the end of the period.

However, Italy fought back fiercely in the second, with Claudia Marletta making an impact for the first time. The 26-year-old player from Ekipe Orizzonte scored twice from dangerous spots on the left side of the field. Italy then enjoyed back-to-back penalties, with Bettini and Bianconi converting to make it 9-2. Agnese Cocchiere took the Italians to double figures with two minutes left in the half.

In spite of this, the Croatians didn’t give up and finished the second quarter with two goals, just like they did the first; firstly through Mladost’s Matea Skelin, and then with a well-taken extra-player score from the experienced thirty-three-year old Emmi Milijkovic.

The game steadied into the third period; Domina and Ivana Butic both cancelled out the goals scored by Chiara Tabani and Claudia Marlette (her hat-trick goal).

The last period was characterised by Italy sitting back, knowing they had already done enough to win the game. Lucrezia Cergol managed to find herself on the scoresheet for only her third goal of the championships. The Setterosa’s captain, Chiara Tabani, then poked home from close range, before Guiditta Galardi showed great strength to score from centre (15-6).

A tired Croatia was fighting hard and had a few opportunities to score. Butic and Rozic were the only players who could find the breakthrough; both with driven shots finding their way into the left-hand side of Aurora Condorelli’s net.

The Setterosa had the last laugh though, and it was Dafne Bettini’s second score of the game which ended proceedings. 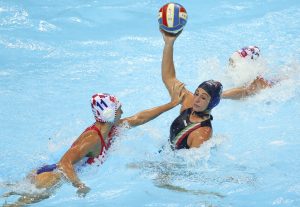 Serbia have finished ninth at the European Championships by beating Germany 12–9 in the 9th/10th play-off final.

Serbia controlled the majority of possession, created numerous scoring chances, and looked the more convincing team overall. The Serbs, who finished ninth in 1997, 2016, and 2018, could have won the game by a far bigger margin had they been more clinical. Hristina Ilic and Nadja Novakovic both netted four times in the game.

It was a case of the two teams feeling each other out in the opening moments of the game, but as soon as the deadlock was broken, Serbia asserted themselves well and took a lead, with VK Vojvodina’s Lolita Avdic sneaking the ball under the arm of Darja Heinbichner from close range, before Anja Svec fired a cross-cage shot into the bottom left-side of the German goal.

With a player advantage, German captain Gesa Deike scored the Germans’ first goal of the match with a top-corner finish. However, Serbia’s captain, Jelena Vukovic, proved she can score goals, too, with a neat finish from 5 metres that gave Dragan Ivkovic’s squad a 3-1 lead at the end of the first quarter.

Serbia kept pressing for more goals early in the second, with Nada Mandic (in the middle) and Hristina Ilic (on the left) finishing off beautiful passing sequences. For the first time in the game, though, Germany looked dangerous, and 19-year-old Greta Tadday scored twice in quick succession to keep Germany in the game (5-3).

But Serbia, against the run of play, added two more goals before halftime to give themselves a comfortable 7-3 lead. Nadja Novakovic, who has been playing in the United States with Long Beach, scored a long-range goal, and Hristina Ilic of Crvena Zvezda scored her second of the game – from a penalty that Heinbichner could only get a palm to.

The goals dried up in the third period, and while Serbia dominated possession and the chances, they couldn’t find the back of the net. Germany, on the other hand, could, thanks to Anne Rieck, who scored a beautiful goal from 7 metres out, thundering into the top left corner. Eventually, Serbia did find a way through at the end of the quarter, and it was Novakovic with an excellent solo effort, floating a lob to the back post for her second goal of the game (8-4).

Into the last, the Germans gained a surge of momentum. While Hristina Ilic struck her third goal on the first attack with a precise finish for the Serbs, excellent finishes from Greta Tadday (hat-trick), Belen Vosseberg (off the post) and Aylin Fry put Germany within two scores (7-9).

With four minutes to play, a VAR review confirmed that Novakovic’s lob had crossed the line, but Aylin Fry hit her second of the quarter to keep the pressure on the Serbs.

After being left unguarded at the back post with two minutes left on the clock, Nadja Novakovic scored a huge goal for Serbia, her fourth of the match. Then, the final nail in the coffin for the Germans was when their keeper, Darja Heinbichner, joined the attack. Her team lost the ball, giving Hristina Ilic an open goal to shoot into from the halfway line. 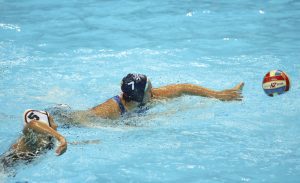 Romania, at their first European Championships, finished in eleventh-place in Split after a deserved 9-5 victory against Slovakia. Bertinni Nenciu’s team was led by the performance of Krisztina-Emese Szeghalmi, who scored five times in the match.  Romania’s goalkeeper, Mariia Dvorzhetska, made an impressive sixteen saves in the game (76%).

Romania struck first, with Krisztina-Emese Szeghalmi netting twice inside the opening four minutes, one of which was a 5m penalty. Shortly after, Martina Kiernoszova of Slovakia completed a quick counterattack to half the Romanian’s lead. Late strikes from Xenia Bonca (ROU) and Karin Kackova (SVK) kept the score close going into the second quarter (3-2).

Despite a few efforts from both teams, the score remained 3-2 for much of the quarter. Mariia Dvorzhetska of Slovakia saved four straight routine lobs without a hitch, while the Romanians committed three offensive fouls in as many attacks.  But it was Romania who finally broke through during a power play in the second; Krisztina Szeghalmi was smartly found on the post by Chelsea Gandrabura, and the 23-year-old calmly tucked home her third goal of the game.

The Romanians benefited from Szeghalmi’s inspired performance. Not long into the second half, the player of Steaua Bucharest added her fourth goal with a driven shot on the left-side.

Slovakia, who now trailed by 5-2, couldn’t find a foothold in the game, specifically in attack. But they were grateful for two errors by Romania’s number thirteen, Dvorzhetska – who, on two occasions, could only palm the ball into her own net via shots from Sedlakova and Sepelova.

While Romania was in the driving seat, a two-goal margin didn’t seem enough for them to be sure of victory. However, right on cue, Ukrainian-born Anastasiia Melnychuk smashed-home a powerful shot from a tight angle to give Romania a significant cushion in the match (7-4).

While Monika Sedlakova, who plays her water polo in Hungary for Gyor, finished off a quick counter attack for the Slovaks, Szeghalmi scored her fifth goal of the game on another 5m penalty, ensuring that she would win the game’s MVP award, and her team would not finish last in Split. Nineteen-year-old Alina-Ioanna Olteanu grabbed a goal right on the buzzer, to secure her brace. 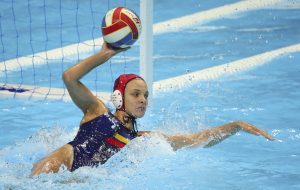