The water polo continues in Sibenik as day two of the Women’s European Junior Championships draws to a close.

The best of the action took place in group D, where both games were free-flowing and entertaining encounters in which Hungary edged past Italy and Slovakia just had enough in the tank to defeat Bulgaria.

The Netherlands began their European conquest with defeat in Group B against Greece, whilst France made it two from two with a routine victory over Ukraine.

Elsewhere, the tournament favourites Spain had a comfortable first contest against Serbia. Spain’s big rivals, Russia, were equally as convincing as they humbled the hosts, Croatia, in the penultimate game of the day.

Spain won comfortably against Serbia thanks to five goals from their superstar and leader, Elena Ruiz. There were also hat-tricks for Noelia Morillo, Daniela Perez and Alba Blazquez.

Israel’s skipper, Dar Menakerman, continued her excellent goal scoring record with another seven goals against the Czech Republic, taking her tally to 13 goals in two games. Tahel Levi also netted a bag-full of goals with five, while Yaacobi and Vashdi both converted four times. 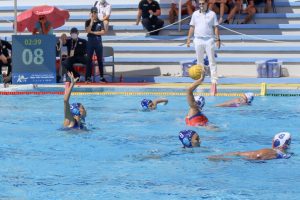 Greece laid down a serious marker to be considered championship contenders by beating the Netherlands in a close contest in Group B. Noa De Vries and Lola Moolhuijzen put in super performances for the Dutch, but braces from Santa, Tsimara, Chaldaiou and Tricha proved to be too much for the side in Orange to handle.

In the other game in the group, five goals from Ukraine’s captain, Kateryna Babak, was not enough to secure a victory for her side, as France’s captain, Ema Vernoux also netted five times. 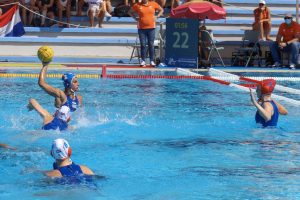 We got to see the Russians in action for the first time today as they made light work of hosts, Croatia. Nearly all of Mikhail Nakoryakov’s players found the back of the net in a game that they were solid in defence and clinical in attack.

Meanwhile, Germany followed up on their easy win over Romania yesterday with an equally as one-sided result against Malta. In this game, Jamie Julique Haas of Germany became the third player at the tournament to net nine goals in a single match.

Hungary have a win in their first game in Sibenik thanks to a last quarter capitulation from Italy. Despite Italy never taking the lead in the contest, the two sides were evenly matched for much of the game. But with the score at 9-7 with four minutes to play, four unanswered goals from the Hungarians made the scoreline line look comfortable.

Like the other game in the group, Slovakia and Bulgaria provided an evenly matched spectacle. Tamara Dubna’s fourth goal of the game helped the Slovakians on their way to the three points.