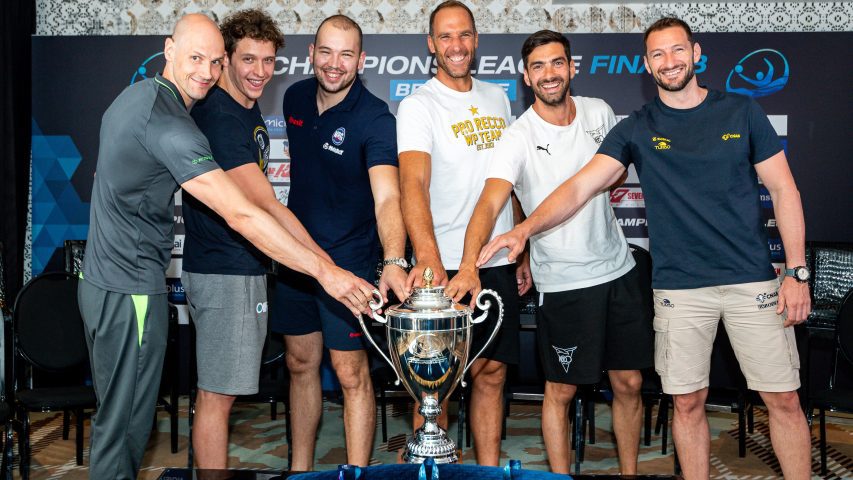 The participants and the organizers are ready for a three-day water polo spectacle in Belgrade.

At least seven teams have more-or-less realistic chances of reaching the throne.

Still, reigning champion Pro Recco and host Novi Beograd stand out as the favorites. Recco is targeting its 10th title. Novi Beograd debuted in the Champions League this season. Before its debut, the Serbian club composed a great team that has to have high ambitions. Home field is a significant advantage, but also a considerable pressure.

But, both teams will face very challenging tasks in the quarterfinals. Pro Recco will play against Barceloneta, which finished 4th in Group B. But if the Spaniards had earned a few points more, they would have won 2nd and 3rd place.

Novi Beograd struggled throughout the season, but it reached a high level of shape at the season’s finish – at the right time. The hosts will face Marseille, a team that has made significant progress from year to year. This season, the French recorded 11 wins and deserved 2nd place in Group B. Until the 13th round, they had realistic chances even to finish 1st in the group.

Brescia, the winner of Group A, will have the easiest task, playing against Hannover. But, the Germans aren’t holding the white flag. They will do everything to upset the favorite.

The last duel of the day will be an encounter between two giants of European water polo, Ferencvaros and Jug. It’s impossible to predict the outcome of this match. Everything is possible.

Today, an opening press conference was held in Belgrade. Head coaches and players of six teams spoke about their ambitions and expectations. Jug and Hannover arrived in Belgrade after the conference.

All coaches and players said that they were ready and motivated for the Final Eight, even though their clubs had played many matches during a tiring season.

Only Brescia of the eight clubs still hasn’t won a trophy this season. After hard battles, it lost two domestic finals (Cup and League) to Recco.

“We haven’t won a trophy this season, but that doesn’t mean that we can’t finish the season with the title in Belgrade”, Brescia’s assistant coach Edvin Calderara said,” We had difficult matches in the national league in the last few weeks, but we are ready for the Final Eight. We don’t underestimate Hannover, but we are prepared mentally and physically for the Final Eight. I expect a spectacular tournament.”

“We finished 1st in a tough Group A. Considering that we must accept the role of the favorite in the quarterfinals. But, we have to prove our quality in the pool. It won’t be easy, we are focused only on the game against Hannover. We expect a great match.” 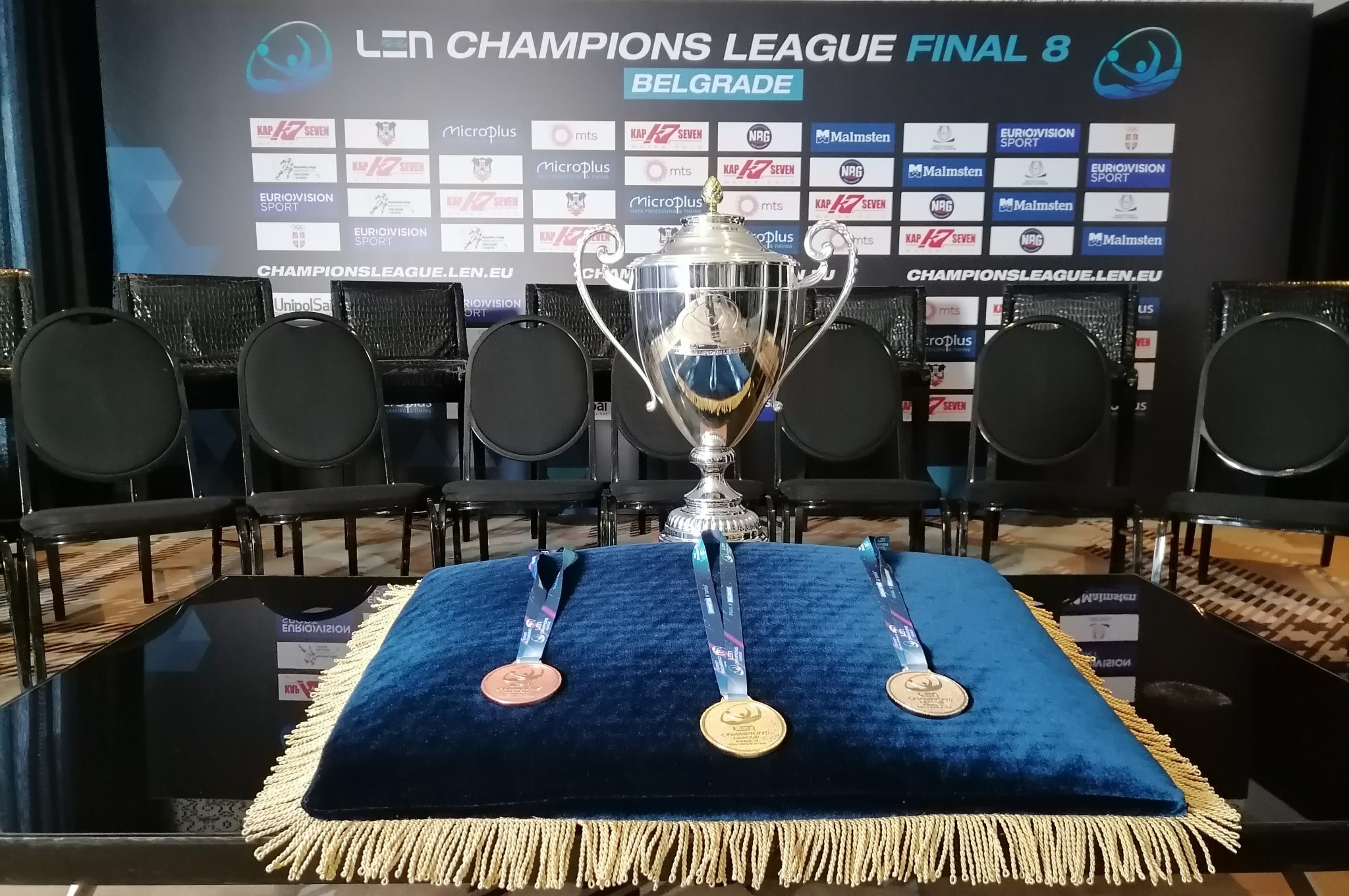 These two teams have met many times in recent years. Still, Barceloneta hasn’t defeated Recco since the current F6/F8 format of the Champions League was introduced. Their first encounter in the season 2013/14 ended in a 10:10 draw. After that, Recco recorded 10 victories.

Both teams are coached by Croats, who know each other very well. Last summer, Elvis Fatovic arrived at Barceloneta. At the same time, Sandro Sukno, who started his coaching career just two years ago, took over European champion Pro Recco. Fatovic was Sukno’s coach in Jug between 2008 and 2011. Besides, Fatovic was Croatia’s assistant coach at the 2012 Olympics, when Croatia won gold, with Sukno in the team. In addition, Sukno and Fatovic live in the same part of Dubrovnik.

“We are not tired after a series of challenging matches against Brescia in the Italian playoffs final. On the contrary, I am happy we had such strong games before the Final Eight in Belgrade. We are in good shape, we want to win, but we respect Barceloneta, which displayed the best water polo in Europe after the New Year.”

“In the past several years, we played against Barceloneta twice in the semifinals at the Champions League final tournaments. In 2015, we beat them narrowly in Barcelona. Last year, we recorded a win in Belgrade. Both times, we lifted the Champions League trophy. I hope that that tradition will continue. But, Barceloneta is an excellent team. We have to be coolheaded. Calmness and concentration are decisive in the matches at the tournaments lke Final Eight is.”

Elvis Fatovic said that his team had had ups and downs during the season, primarily because of problems with corona. But, they found their rhythm:

“We haven’t lost a game since a 9:11 defeat to Novi Beograd, here in Belgrade in January. Since then, we have been in a great series of good results both in domestic competitions and in the Champions League. We are happy we managed to qualify for the Final Eight in a very tough group. It was challenging to earn an F8 berth in Group A. Some excellent teams failed to reach Belgrade. We respect Pro Recco, but we respect ourselves, too.”

“We came here as underdogs. Our goal was to play in the Final Eight. We achieved that goal, and now we want to enjoy water polo in Belgrade. But, I think we can beat Pro Recco if we play best as we can.” 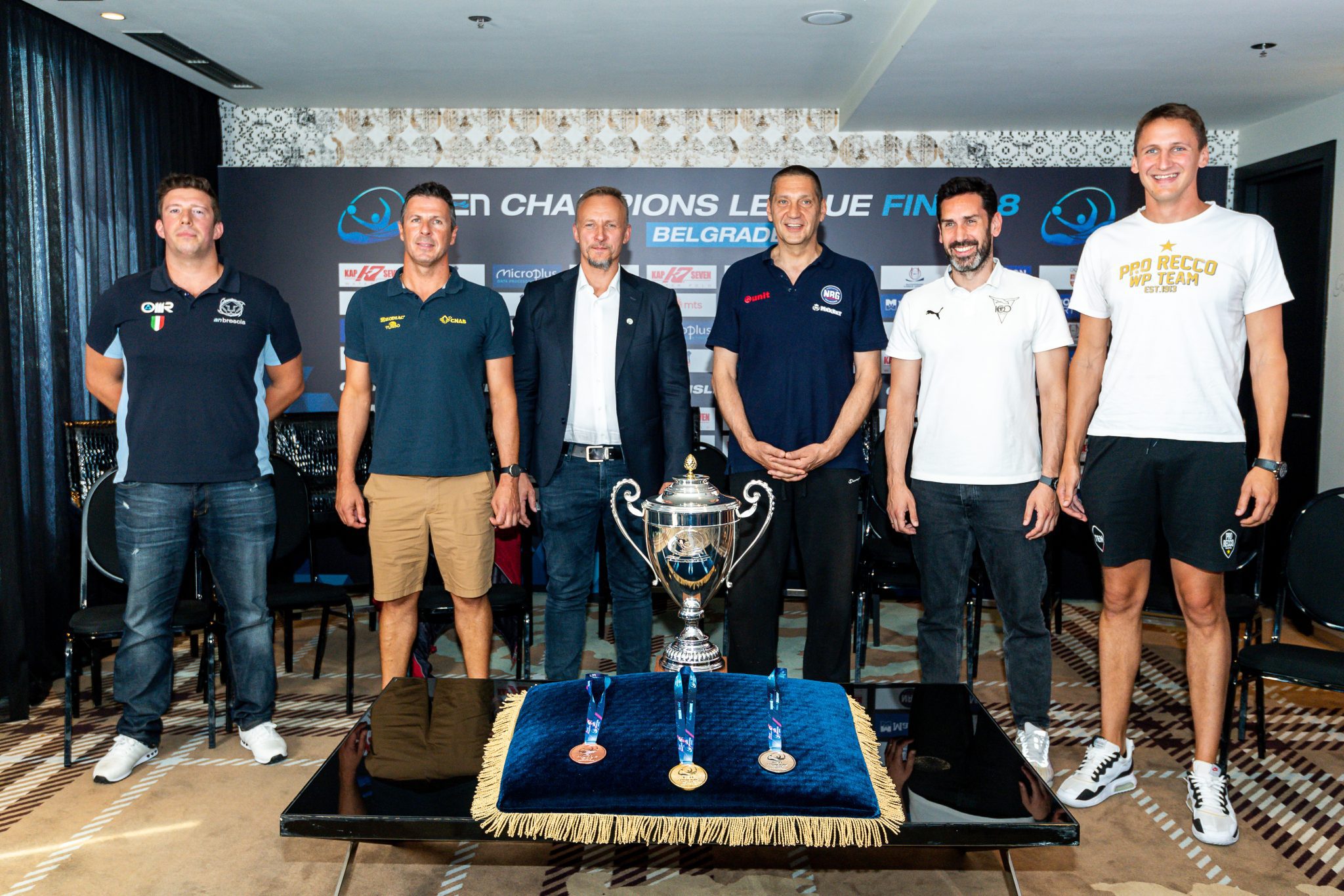 Novi Beograd and Marseille will face off in the third match of the day. As we already wrote, many consider the home team favorite. However, Marseille is an excellent team, too.

Legendary Igor Milanovic, who has been coaching Novi Beograd since February, spoke about the pressure that all favorites have:

“We had enormous pressure in the domestic competitions and the Regional League, but we don’t feel such pressure now. All matches at the tournament will be difficult. After all, the best European teams are in Belgrade. A series of good results at the finish of the season boosted our self-confidence. We watched Marseille’s games and analyzed the rival. We are aware of the quality of our opponent. We are ready for the match and start the tournament with realistic optimism.”

“Last season is far behind me. I think only about upcoming challenges. As Igor Milanovic said, we have no pressure and we respect Marseille. We know what their advantages and qualities are. But, we believe in ourselves. We will go step-by-step. Novi Beograd is focused on the match against Marseille at the moment. After that, we’ll see…”

Marseille has several outstanding players who learned to play water polo in schools of famous clubs in the ex-Yu countries. But, Marseille’s head coach Milos Scepanovic, who also left a strong mark in water polo in Yugoslavia and Montenegro, thinks that his team isn’t unique regarding this topic.

“Almost all of the best European clubs have players from the ex-Yugoslavia countries. So, we aren’t unique. I hope that we will show our best and play on a level of our best games this season.”

“We have improved our play during this season and have matured as a team. Marseille is a good combination of French and players from the ex-Yu counties. If we play as we can, we can be an equal opponent to anyone”

Jug has won the Champions League four times. In 2019, Ferencvaros lifted the trophy for the first time in history. The Budapest-based team surprised many at the 2019 F8 in Hannover, where they arrived from 4th place in Group A. The first of the favorites they beat in Hannover was Jug. Since then, these two teams haven’t met.
Ferencvaros have won everything it could in this season – “double crown” in Hungary. The “Green-whites” are satisfied with what they have achieved so far. But, the season isn’t over…
Head coach Zsolt Varga said:

“I am glad we are here. We won 2nd place in a very challenging Group A. Last summer, our team changed a lot. Seven players left the club, and five arrived. In the first half of the season, we were still adapting new players to our tactics and we were in a process of building a new team. Besides, for months we had only one available centre-forward. Because of that, we didn’t start the season well and had ups and downs. But, as the end of the season was approaching, we got into shape. We finished the national season with two trophies. Here, in Belgrade, we want to go all the way.”

Ferencvaros’ captain Denes Varga, one of the four winners of the Total Player Award who will participate in the Final Eight (besides Sandro Sukno, Felipe Perrone and Dusan Mandic), commented:

“We feel great satisfaction because of the successes in the Hungarian competitions and because we managed to qualify for the F8. We have a chance to crown the great season in Belgrade, and we’ll do everything to take that chance. We are aware of Jug’s strength. Still, first of all, we would like to enjoy water polo.

Bad news for Jug’s fans arrived today. The Croatian champion will appear in the F8 without one of the key players Hrvoje Benic. Because of a serious injury, Benic didn’t come to Belgrade. He went to Zagreb for medical examinations. 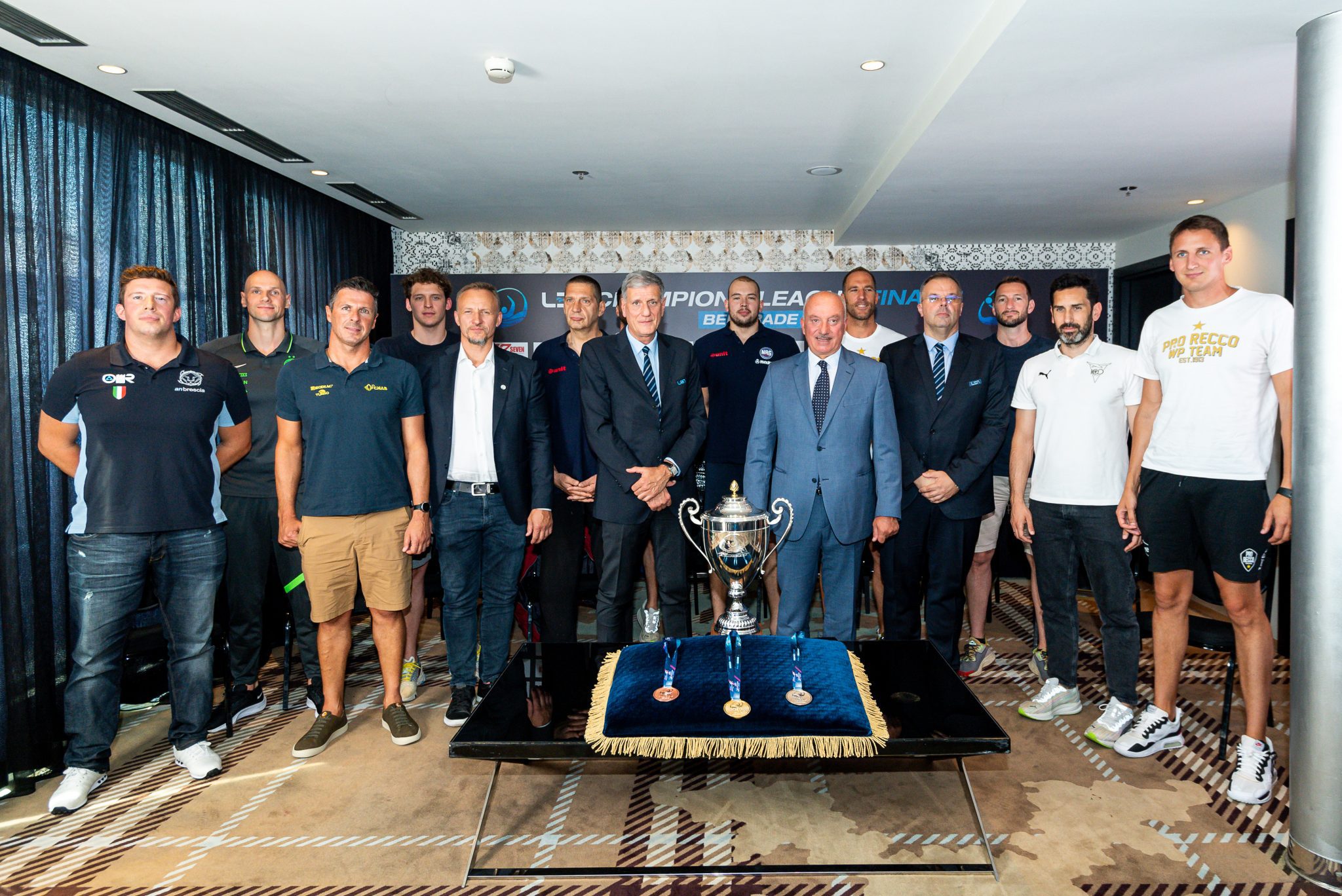 Perisic also thanked the hosts and the local and state authorities and said that he expected water polo fans would enjoy great water polo matches.

Maro Birri underlined that the Champions League was the best competition for the clubs in the world. The eight teams that arrived in Belgrade represent the best European water polo has, Birri said. He added that the games would be broadcasted not only in Europe but in South America, too.