After two decades of staying away from the top, Zsolt Varga led Ferencvaros to the trophy. The final match against Miskolc has been a mixture of fierce and careful play, worthy of the finals in the Hungarian Cup.

In the second quarter, Miskolci toughened their defenses and consistently blocked all the shots. It wasn’t enough, though, as a couple of balls slipped pass Kristóf Csoma’s defense.

The second half of the match kept the slow pace. FTC’s great defenses proved worthy once again as they received only one goal in the third quarter and none in the fourth. Even though Csoma managed to block a few shots, it wasn’t enough for the uncompromising Denes Varga who pressed hard against their nets. Finally, when the outcome was clear, Ferencvaros pushed for 2:0 in the last quarter, thus ending the match with 10:4. 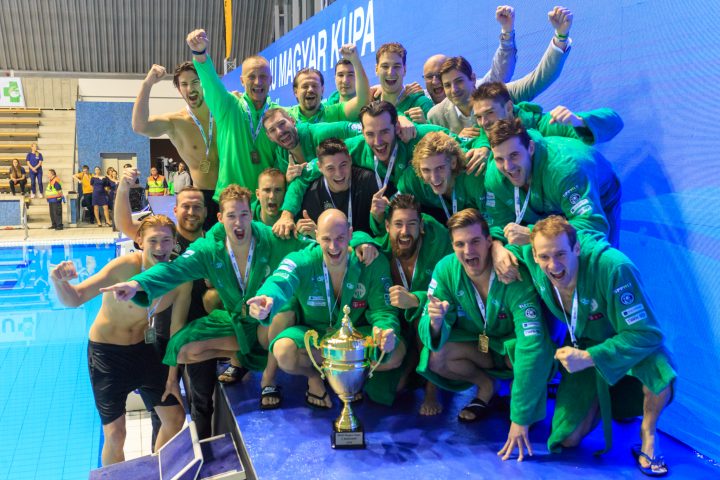 “This was the triumph of our team play we’ve been working on for so long. We had our decisive players, of course, but we played as a team throughout the game, and that was the reason we won. Even with the slower rhythms of playing, we kept on pushing. It was challenging to find the concentration throughout the Cup, but we did it. We won the Hungarian Cup.”

“I enjoyed every moment of this competition. All of this was a confirmation of how good we can play after a summer of tough preparations. It was all necessary and, in the end, worth it.”

“Prior to the game, I said we’re about to face one of the best teams – Ferencvaros. This match proved that there is so much difference between a team that performs internationally and the one that isn’t. I would like to point out the play Denes Varga showed to us today. He’s the proof of the quality that can be seen in Hungarian water polo.”