Fierce Games and A Penalty Shootout on Perth’s Day 1 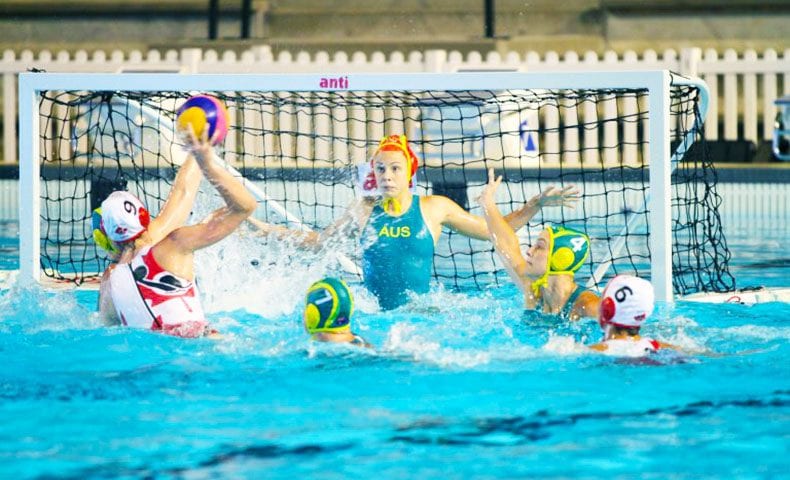 Perth, Australia, Mar 26.— China men needed a late goal to force a penalty shootout with Argentina, which it lost, on the opening day of the FINA Water Polo World League Intercontinental Cup tournaments at the HBF Stadium in Perth.

It was a day of close matches and powerful play, but no closer than China squandering a match it led until five minutes from time and then suffering the humiliation of a shootout loss.

With the scores locked at 8-8, the first nine shooters converted before the final Chinese marksman had his effort blocked and Argentina had two points.

Japan and South Africa battled out a 33-goal match in the other Group A encounter. Japan finished 19-14 with Yusuke Inaba (JPN) and Liam Neill (RSA) top-scoring with five goals apiece.

In Group B, Kazakhstan and New Zealand slogged out an amazing match with four changes of the lead and the Kiwis dominating the middle of the match.

However, Kazakhstan came from 7-9 to 12-11 in the final quarter for victory.

Australia had to overcome a four-goal deficit in the first period to beat Canada 9-8 thanks to three goals from Aidan Roach. Australia redressed the imbalance by halftime at 6-5 and went 9-7 ahead only for Canada to claim the last goal.

In the women’s competition, reigning World League champion The United States of America survived a 3-3 opening quarter to shut out China for more than two quarters and went away for an 11-5 victory.

In the other Group A encounter, Japan headed off New Zealand 12-7 after leading just 8-7 a minute into the final quarter. Two counter-attack goals gave Japan the edge.

In Group B, Kazakhstan turned an 8-8 scoreline against South Africa four minutes from time into a 12-9 finish.

The feature match of the day had Australia facing Canada and both teams did not disappoint. Australia was 8-3 up at halftime only for Canada to win the second half 6-5. Canada closed to two at 2.45 in the last quarter.

The opening match was full of excitement and action with South Africa looking a capable winner in the early stages and the third period. Kazakhstan was not to be denied and clawed back four goals by quarter time, edged out to three up at halftime and then witnessed South Africa surge past them time and again in the third to lose the lead.

The advantage came back early in the fourth amidst a flurry of penalty shots. The lead went to two twice (10-8 and 11-9) before a long shot from Zamirco Myrzafekora closed the match with 13 seconds remaining with her fourth goal. Anastassiya Mirshino was also deadly with two action goals, one on extra and a fourth from the penalty line. Those six goals were critical for Kazakhstan, who looked more tired and suffered many counter-attacks against them. However, superior conversions of extra-man attack and superb shut-out defense on man down were the difference in the match.

Kazakhstan picked up on loose South African defense, especially on the bottom right. South Africa worked hard at center forward, with the ball getting infrequently, but poor finishing with outside shots proved and the impenetrable Kazakh goal when a man down, proved South Africa’s downfall. For a first match, South Africa can be proud and Kazakhstan will need to work on the lapses.

Opening matches are interesting affairs and this encounter proved just that with the multi-champion United States of America struggling early and then taking control. China proved the equal of USA in the opening quarter and then struggled with three offensive fouls that turned the match and saw the shuffle away to a 6-3 lead. China failed to breach the USA defense for both middle quarters and, in fact, for a total of nearly 24 minutes.

USA head coach Adam Krikorian would have been satisfied with his new team, patiently waiting for the team to gel and the score to mount. It was just a first match on a long road to more titles. China rallied in the final quarter, which was encouraging. Rachel Fattal collected her third major foul midway through the final quarter, ceding a penalty goal, but she scored in each of the first three periods. Kiley Neushul was named the player of the match with her all-around play and two goals in the first half. Both teams will be looking closely at the extra-man count with only one goal from 11 opportunities and rarely, the USA claiming no goal from the exclusion period.

Japan may have come away with the victory, but honors were even in some parts of the pool. Japan is the leading nation of the two and New Zealand showed respect and played hard, working the ball to er and coming up with many opportunities. However, the extra-man count was not anything to get excited about, although two penalty strikes did help.

The higher experience of Japan told and a respectable extra-man count, five goals from strike force Akari Inaba — four in the second period — had Japan in the box seat. The second quarter was long, with 11 goals as a parade of fastball, whipped-in passes, and only four extra-man chances, such was the fury of the match. The third was a defensive effort by both teams as they settled into the match and it could have gone either way. The Kiwis struck back with a penalty goal for 7-8 and Arima converted extra. Two counter-attack goals to Misaki Noro put the match beyond doubt and Miku Koide’s conversion of extra in the last minute flattered Japan.

China controlled the match until the last five minutes, gave up the lead and needed an equalizer at 2:20 in the final quarter to force a penalty shootout, which it lost. China had a 3-1 lead in the first quarter and 5-3 in the second. In the third period, the margin was 8-6 at one stage, but China could not shake off the determined Argentinians. They rode in from the pampas, drew level at 8-8 inside the first minute of the final quarter, went 9-8 ahead at 5:19 and then allowed China some hope with the extra-man equalizer. Both teams fought hard and outside shots proved crucial.

The shooting was wonderful from both teams, although China suffered on an extra-man attack. Then came the penalty shootout and everyone scored in the first nine attempts, only for Yu Liu to have his attempt blocked to finish the match in Argentina’s favor. A dejected Chinese team left the pool deck wondering what went wrong when it controlled so much of the play and the scoreboard. German Yanez was the star for Argentina with five goals, a real threat in each of the quarters. China used seven scorers and Argentina five.

What a match with 33 goals! The speed and agility of Japan, especially on a counter-attack, and the brawn and power of the South Africans excited the crowd. The quarter scores tell it all and South Africa is happy with the workload against such a spritely opposition. Japan might look for more, but the counter-attacks combinations were a delight to see. There were options galore with sharp passing proving decisive. For South Africa, Liam Neill was in exceptional form at center forward, claiming five goals.

Some were with pure brilliance and at least one was a simple tap-in from a spearing cross-pass. This tall timber said the Japanese sat off him and it gave him more space than he was used to at home. Yusuke Inaba was Neill’s equal with five goals, mainly from speedy interplay. At 9-3 with three minutes left of the second period, it looked like Japan was headed for a romping victory. However, South Africa scored twice more before halftime and narrowed to 10-6. Japan stretched it to 13-7 as the torrent of goals was relentless. By the time the final whistle sounded the momentum had not slowed and both teams will be looking for better performances during the week. The star for South Africa was goalkeeper Lwazi Madi was exceptional in the first half with about a dozen saves that kept his team in the match.

This was a match in doubt until the final whistle as there were four changes at the front and heated exchanges with Anton Sunde (NZL) being rolled in the final quarter. The red card demeaned Sunde whose inspiration and three goals fired up the men in black. These two evenly matches teams for size, speed and firepower made it an engrossing clash and as the sunset and the lights came on, New Zealand wasted it timeout play in the final minute when a goal down.

However, it had the final attack, gained the exclusion, but the final shot was blocked. Kazakhstan was a worthy winner and New Zealand would go away nursing lost pride after a match it probably should have won. On extra-man attack, Kazakhstan was dynamite, especially from the deep wings.

When a team goes four goals ahead, it demoralizes some teams, but not Australia. By halftime, the Aussie Sharks had narrowed the margin to 5-3 and a shutout in the third period gave it the 6-5 advantage. This became 7-5, 8-6 and 9-7 by 3:09 as Canada refused to submit. In fact, with 10 seconds left, Canada went to a timeout to set the final shot, but it failed to gain any traction and Australia survived.

Both goalkeepers were in the fray and much of the glory was heaped on Olympian Aidan Roach with his three goals and general all-around play. Outside shots were the mark of the Aussie team as getting anything at center forward was hard work, especially for Joe Kayes. At the other end, Canada’s power center forward Nicholas Bicari relished some space with four goals, including two in the opening period.

Canada started the better, but Australia went ahead at 2-1 and was comfortable by halftime with a five-goal margin. Both teams played with aggression and had some excellent team moves, making connections. The Aussie Stingers did not relax in the third period, it was just that Canada stepped up and resoundingly won the contest. At 6-9, there was no panic for Canada, but Australia maintained the three-goal margin until Canada trimmed it to two at 2:45. Zoe Arancini converted extra but the clock failed to reset, Canada protested and the shot clock was set to 10 and the goal disallowed. However, Arancini converted extra-man on the next attack and 12-9 at 1:52 was a better option. for the home side. Canada could not get the ball past Gabriella Palm when needed and the buffer was too much for Canada to come back from. In fact, the final goal went Australia’s way thanks to Hannah Buckling on the counter.