Today is the opening day of the FINA Women’s Water Polo World League Super Final at the Natatorium Kunshan Sports Centre on Monday.

This match was proof that closely fought encounters will be the norm in Kunshan. The clash between two countries who have won Olympic gold medals was intense and engrossing, but always favored the Netherlands. In fact, Australian assistant coach Taryn Woods was a member of the victorious Australian team in 2000.

Australia started strongly but two goals from the Dutch within a minute midway through the first quarter set the tone of the match. Nearly a quarter of playing time elapsed before Vivian Sevenich gained the next goal. Australia retaliated only for the Netherlands to advance to 5-2 three minutes into the third quarter. Isobel Bishop scored with her left arm after the exclusion period to give hope at 4:31. Playing for Australia was Bronwen Knox, who took time off after Rio 2016, and brings her 342-match experience to the team. Like her team-mates, her shooting met stout resistance, especially from spectacular goalkeeper Laura Aarts.

Knox did manage to break through for 6-4 at the top of the fourth. Wayward shooting, forced by the Dutch defense, also proved critical in the Aussie Stingers’ chances. The three-goal advantage at the final break was insurmountable even though Australia was getting the better of the fouls. Catharine van der Sloot loved the occasion, scoring three goals in the second half, including the 7-4 penalty shot at 4:16 that spelled the end for Australia. Elle Armit grabbed her second when she swam on to a loose ball in front of goal for 7-5 in the final minute.

The Dutch, like the USA, will be tremendous forces to conquer in Kunshan. 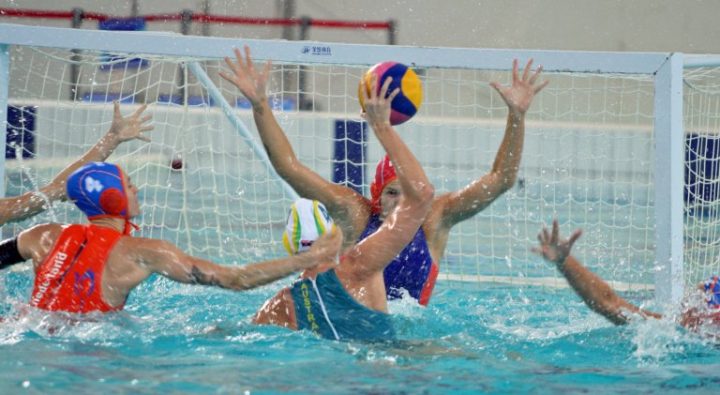 This was a clash of two livewire teams — neither particularly large, but both very fast. Swimming was the key and both teams were up to the task.

While it was Spain who produced two quick goals to start the match, China, in front of a near-crowded house, struck back with two for an excellent first quarter. Spain, with a team vastly unchanged since winning the FINA World Championship in Barcelona in 2013, let fly with a string of goals.

China had chances but could not breach the defense, even with two penalty attempts, one in each of the first periods. One went wide and the other into the outstretched left arm of Elena Sanchez. Beatriz Ortiz scored twice within a minute to start the second-quarter onslaught.

By halftime, Spain was 7-2 ahead and looking strong, well-drilled and decisive. The experience of Spain told in the third period as the goals rained, lifting to double figures halfway through. Jing Zhang provided some relief at 8-3 on extra. Two of Spain’s goals came from the penalty line in the period. Spain headed into the final quarter 11-3 ahead in a match where the intensity never died. SanFeng Nong pulled one back from the top for China to start the fourth quarter.

This became 11-5 before Spain scored. Then China drilled another home and it was 13-6, a far more respectable margin, considering the quality of the match. Spanish head coach Miguel Oca — a 1996 Olympic champion — ran a slick operation throughout. Dali Gong could also be proud of his team’s efforts, fighting until the last. 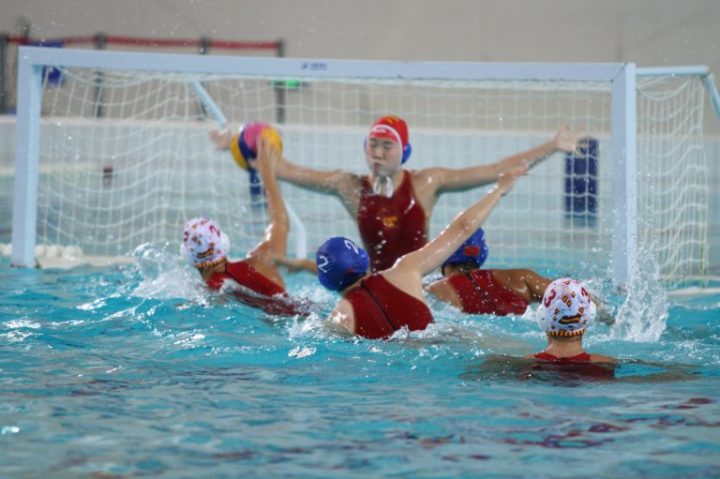 Multi-gold- United States of America may be looking for more booty, but had trouble finding a rhythm in the opening quarter against Japan, before getting into stride and swimming away with the match. Japan was obstructive in the first quarter and matched USA all over the pool. However, once the floodgates opened, USA sent in a torrent of goals.

Brigitta Games’ flash conversion of an extra man showed that it was eager to put an ocean between it and Japan. Yumi Arima fired in from about five metres to score the last goal of the first half to make it just four in arrears.

Japan tended to leave big gaps at center-forward with drives not timed well, something it will work on, no doubt, in later matches. While USA was adding to the bank of goals, Japan never gave up and was rewarded with a counter-attack goal through Akari Inaba late in the third for 12-4. USA’s better turning skills and quicker passing proved most beneficial, getting better as the match developed. Mel Seidemann showed her powerful two-metre skills with a powerful close-in shot, bouncing into the net.

More pressure came from Japan in the final period, holding the powerful USA to just the two goals, Games netting a centre-forward lob (and missing out on a fourth when a team-mate committed a turnover foul as she was about to shoot). Games hails from Colorado, but plays in California. 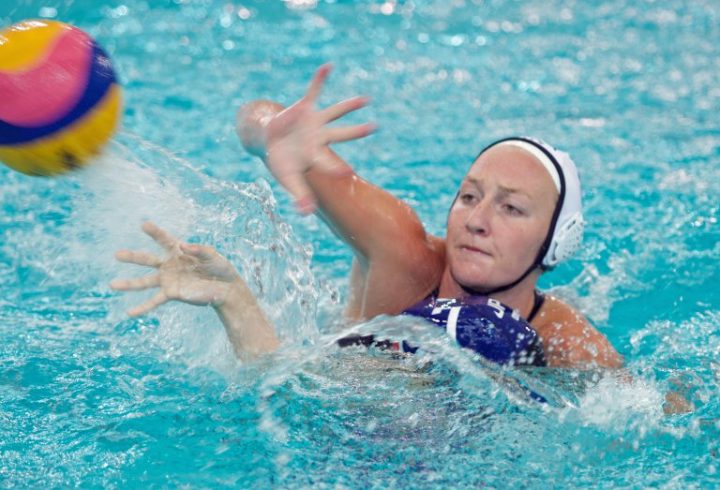 Last year’s silver medallist, Canada, came away with a well-controlled victory, based on excellent man-down defense. Russia gained the opportunities, buried three penalty goals, but could not effectively find space through the wall of arms, having all attempts blocked. Canada struggled on extra as well but managed to get through with outside shots, looking more dangerous.

Both teams started with the fire in their bellies but made some simple mistakes, which is probably understandable so early in the international season. Seven goals in the opening quarter said a lot, but possibly more about bad defense than star shooting.

The second period was more controlled with Russia converting a penalty and center-forward Elyse Lemay-Lavoie scoring her second and the first of her two strikes from two meters. Canada had the better of the third period, especially with head coach Haris Pavlidis thundering commands when required.

They pulled back twice at 6-6 and 7-7 before pressing on to 9-7 before. Canada used a timeout and the resulting shot from FINA newcomer this year, Gurdreet Sohi, converted the extra-man attack for 10-8 with 11 seconds left on the period clock. The go-ahead 8-7 goal from Kelly McKee was exceptional, seemingly climbing to the ceiling for the shot. The 9-7 score from Emma Wright was her third. Evgenia Ivanova’s counter-attack goals for 6-5 showed true experience, holding off her challenger and calmly lobbing Clara Vulpisi. The final period was low key with a goal apiece, Monika Eggens gaining a second and Russian captain Ekaterina Prokofyeva converting the third penalty foul at 4:20. 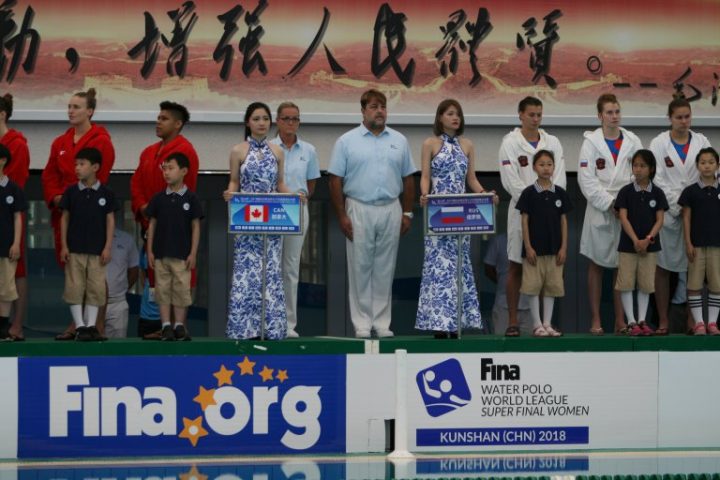 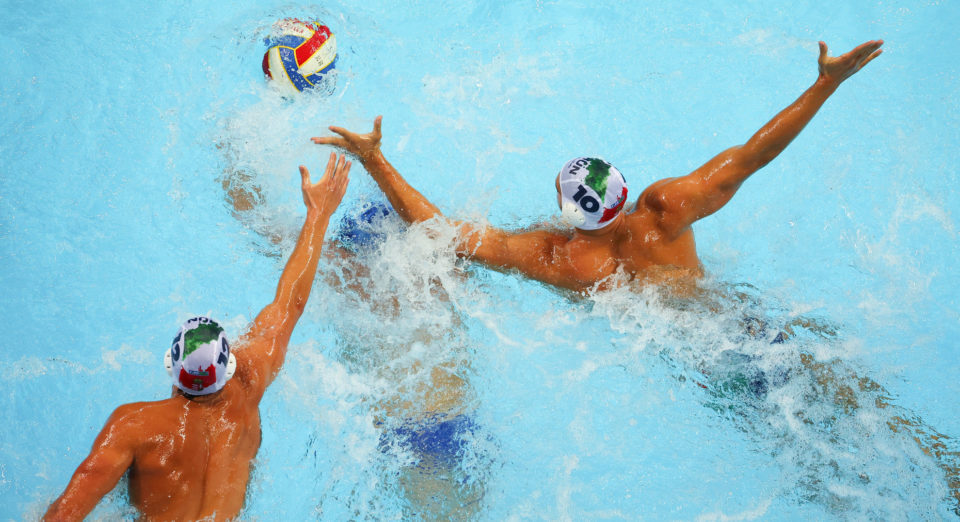