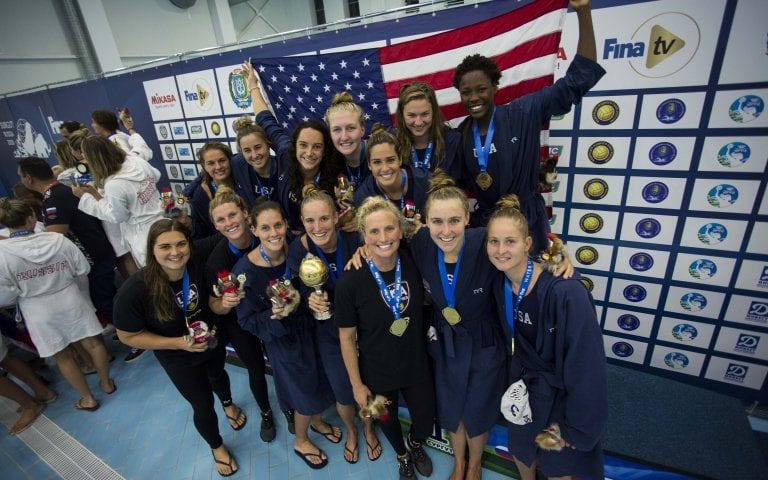 The United States of America is the new old winners of the FINA Women’s Water Polo World Cup-2018! In front of over 1500 thrilled fans in the Olymp swimming center of Surgut, they overpowered Russia by 8-5 to claim their fourth overall and third straight title. The hosts tried hard and were ready to accept the challenge, but could end no higher than adding another silver to their “silver and bronze” profile.

The 17th edition of the FINA Women’s Water Polo World Cup improved Australian tally to 12 pieces on their 5th bronze. They got on the podium through the consolation final against Spain, and captain Rowie Webster netted an impressive 5, 9-8. World#2 and European #3 trailed all the way up to the buzzer, but could not break up the flow and finished lowly fourth.

Hardworking China and ambitious Canada played out the 5th position in the extended shoot-out, where Asians proved to have a better luck. The 7th placement went down to New Zealand, registering no major faults against South Africa, 14-3. 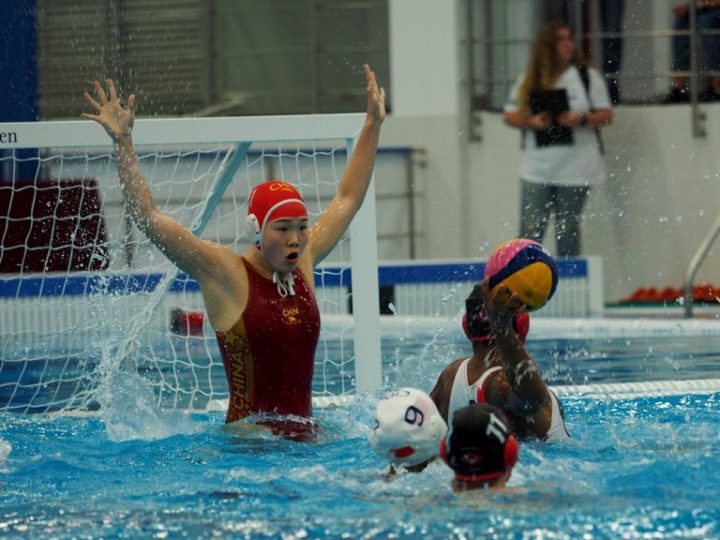 New Zealand finished 7th, and South Africa landed on the 8th position, which was quite a predictable outcome of this placement game. The young and inexperienced had no ample arguments against Angela Winstanley Smith’s coached side. Like 3 days ago in the group’s game, they were always down, in spite of a lot of spade work done by them pretty hard. Shooting percentage turned out in this game to be a decisive factor. Eventual winners were not at all great as well, hitting just every fifth. 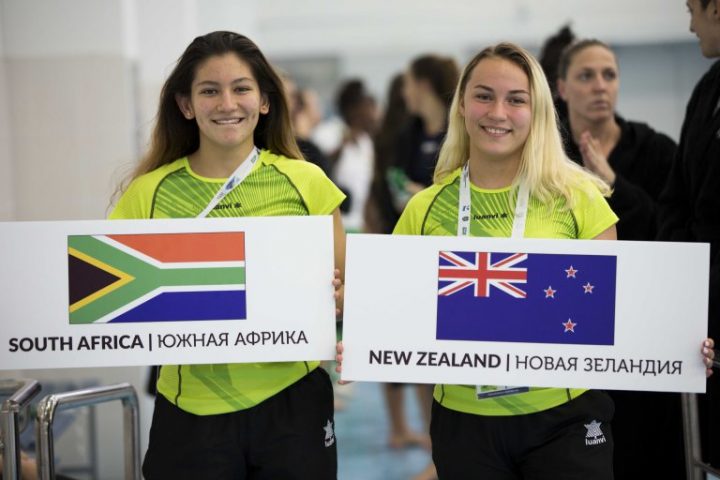 New Zealand jumped into a 3-0 run in the first quarter. All three came in a similar fashion by Emmerson Joy Houghton through the center shots. Coach introduced corrections to her offensive model and rotated roster, while that on the RSA’s side had been remained unchanged. South African’s would habitually enter the zone as 3 to 3 model and then would regroup to a 4 to 2. That scheme contained little threats to New Zealand, which made some good use of the flow.

Their fast attacks changed one another to make it possible boosting in the gap. A lot of various shots followed: from water, by air, in extra and in contra, to no fruits either with no chance of ever seeing the net.

The game progressed to see 6 more nice combinations, completed by “Kiwis” and one – by South African side. The goal of credit was earned rather than performed by Kiseley White as her center cross-shot got launched in the middle of the field, 9 – 1. The game was almost done then, at one quarter left in the match-up. The fourth registered 5-2 for “kiwis”, who finally sealed the win, 14-3. 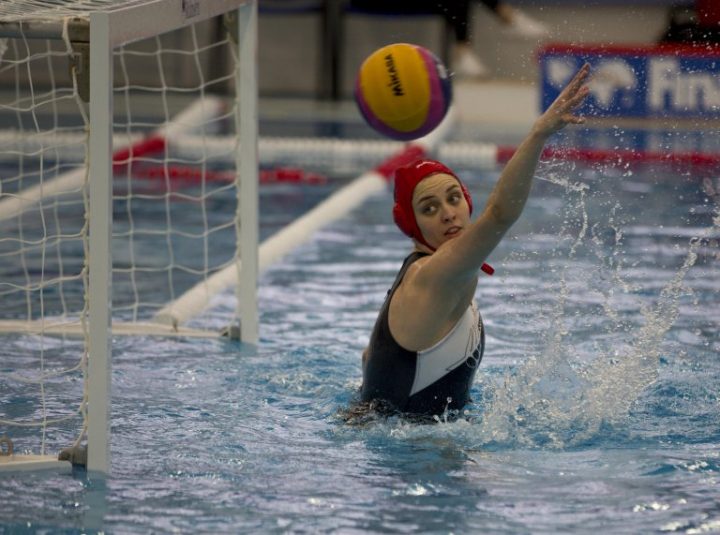 The most beautiful goal of the match-up came by Bernadette Gabrielle Doyle of New Zealand at 10-1. She swam fast leaving a hungry marker behind her. Once receiving a long pass, she assumed the central position and left no chance for Maria Daniella Passoni in charge of South African “posts”.

With the consolation 5th place on the stake, Canada – China encounter was meant to be fierce and uncompromising. The expectations well proved to see an engaging game. China leads first by a really large margin, then Canadians revived to raise back the question of the eventual winner. The denouement needed fire to book a tie after 4 “regulars”. The lottery penalty shoot-out moved one up for Chinese as unlucky North Americans finished as low as sixth. 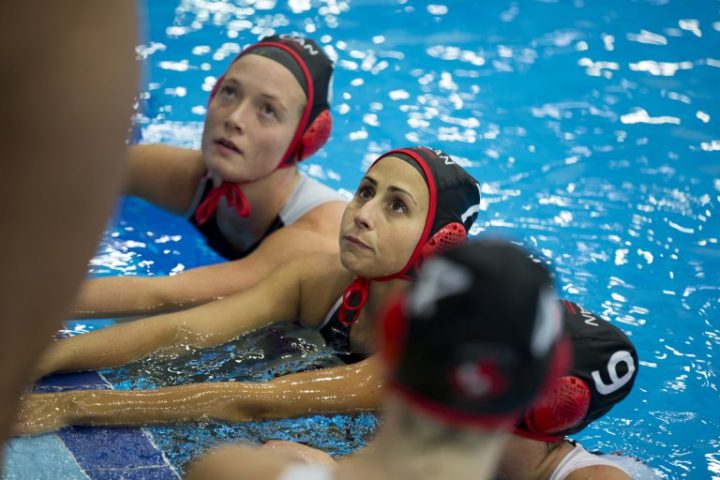 It all started like a mess as both teams struggled to sort out their game’s flow. Asians showcased a full court pressing and this is why Canada was a bit uncomfortable in their attacks. On their part, Chinese did well offensively, netting thrice they have conceded one.

Zhang Panyi dished Wang Xinyuan for the opener in extra, and Canadian women replied back on a couple of counter-attacks followed by set-pieces from Joel Behkazi, 1-1. Then Zhang Zhing converted their second straight man-up to seal the quarter by the third goal of Guo Ning at the edge of a counter-attack. 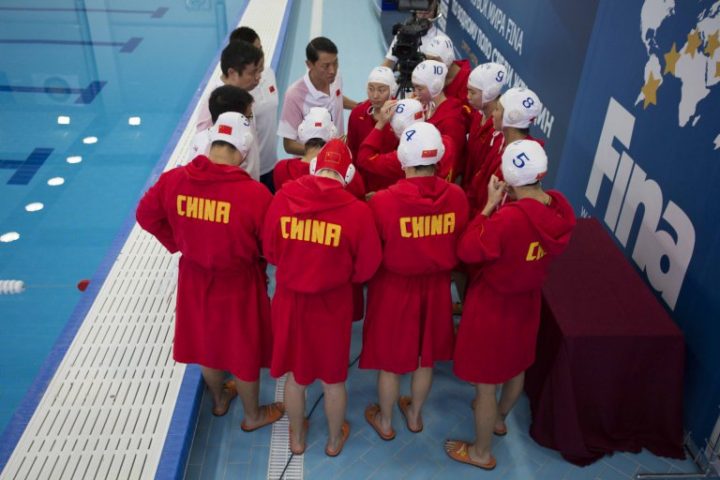 In the second, teams traded points. Joel Behkazi got on the scoreboard next, receiving a state-of-the-art assist from Elyse Lavoie Lemay. Mei Xiaochan converted her “contra breakthrough”, choosing the right point to touch the net. Canadians had a 3-3 offense and managed to come up as close as one, 4-3. Emma Wright was again on fire and launched her tomahawk out of the 2nd line. Zhai Ying exchanged goals with power and quick Krystine Alogbo, followed by 2 “doughnuts” by Xinyan and Huan Wang, 7-4.

After the break, Asians went on improving and hit their day’s high, 9-4.

Theoharis Pavlidis was looking for solutions and rotated players, which never ceased shooting and creating moments. Persistence fruited as two goals went straight. Joel Behkazi caught Chinese at a loss once they lost concentration, and Krystine Alogbo dished for Emma Wright in a counter attack, 9-6. They never stopped and felt highly afresh. Meanwhile, the difference kept on melting, 10-8 at one quarter left in the competition. 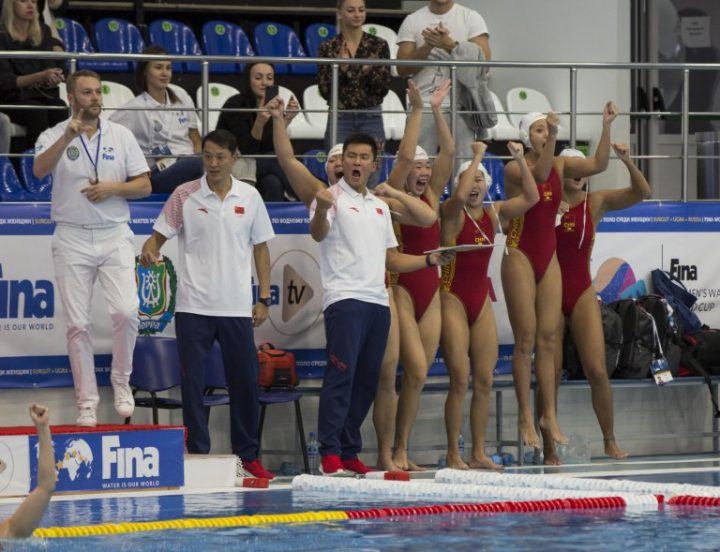 Monika Eggens and Emma Wright did their job right to level the chances, 10-10. A number of hot attacks followed with no success to either side. Normal time ended to book a shoot-out, where Lin Peng saved one more than her Canadian vis-à-vis Claire Down Wright, 10-9.

In the match for bronze, Australia overcomes the disappointment of Saturday’s semifinal, where they suffered a sensitive defeated to Russia. A new day came also to see them “stingers” edging out the Ref Fury in front of a 1500 strong sellout crowd, and Rowena Webster became the bronze medal’s game MVP, scoring half more than her team – 5 goals. 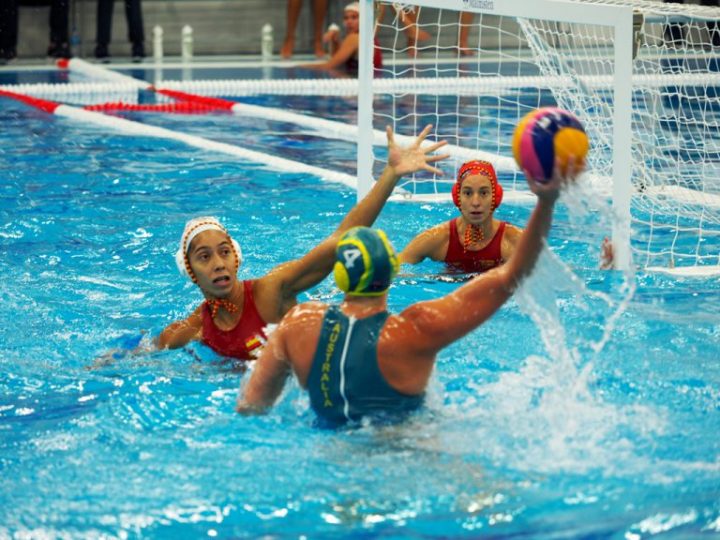 Comparing to the previous edition of the FINA World Cup both teams went one position down. Ex-runner-up Australia was to vie for bronze as bronze-holders Spain could have left in the dust. Both powers were too ambitious and hot and very hungry. The match lived up to all expectations as spectators at the Olymp swimming center of Surgut were happy to witness their fight.

It was not just a game, but a competition of the best scorers. However, trailing for fully 4 periods, they chose up to solve the matter in the normal time. 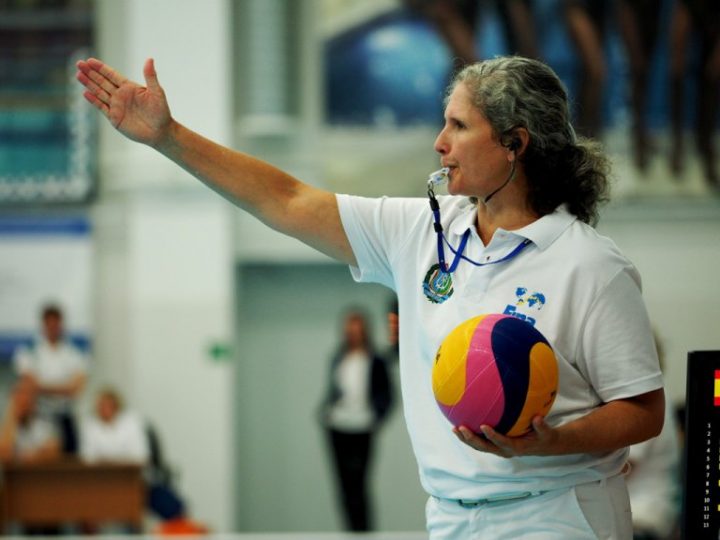 Australia netted 2 to start the action. In this way, they have booked a lead with the perfect goals, 2-0. One dish was served by Keesja Gofers for her teammate Bronnen, which kicked off the glass. Rowie Webster supported her swinging, and the Spanish response appeared in the 2nd frame.

Anna Espar was left unattended, 1-2, and then there came 5 more beautiful goals. Keesja Gofers, Hannah Buckling, Helena Lloret, Paula Crespi traded points, and the shooting parade was concluded by an equalizer to the gloom by Spain. Anna Espar dished up to center Paula Leiton, which made it 4-4 tie after the first half. 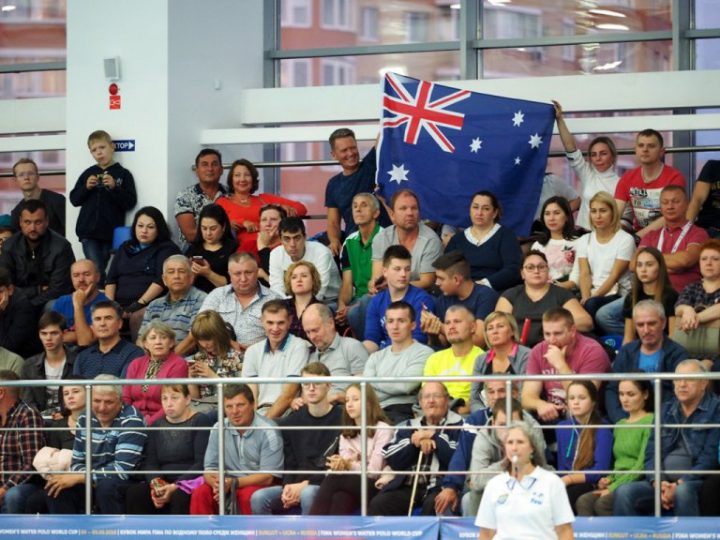 After the large break, Webster proceeded to score. In course of 2 periods, she hit net 4 times to go. She was backed up by her teammate Bronnen, making good use of the Halligan’s pass. Spain’s response came along with 2 Annas – Espar and Gual, but they could not jump ahead. Seeing plenty of shots and actions, the game came to the end at 8-9.

The United States vs Russia 8:5

The United States of America is the new old winners of the FINA Women’s Water Polo World Cup-2018! In front of over 1500 thrilled fans in the Olymp Swimming Center of Surgut, they overpowered Russia, 8-5 to claim their fourth overall and third straight title. Host team tried hard and readily accepted the US gold challenge but could end no higher than adding second silver to their 1 bronze profile.

The game turned out to be hot and exciting, it was of a physical character with a lot of shots. The defense was the key factor, where Americans were again on top. Russia chose to rely on hedging, helping each other when seeing a sort of threat. Americans’ were of a movable nature, which combined zone, pressing and marking in its various forms. 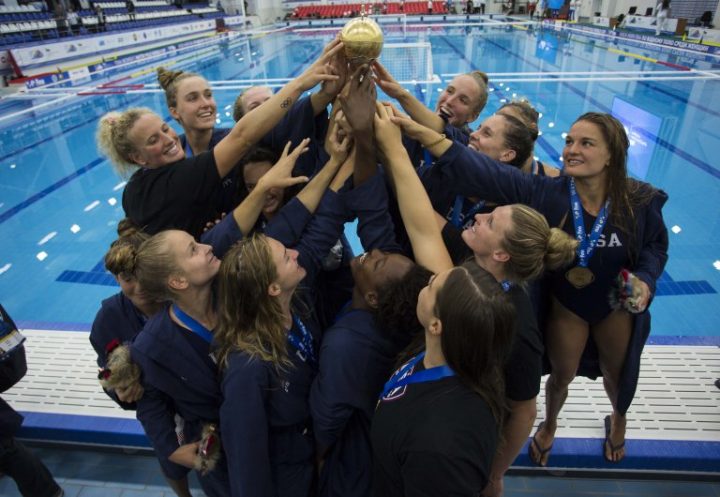 Power center Aria Fischer let the game started “kicking off the glass”. Teams exchanged extra-man goals of Tatiana Zubkova and Paige Hauschild to go out for a 2-1 play in favor of the US. Going 2 up in the next period, Adam Krikorian coached side realized a number of other chances.

Margaret Steffens in the power play, center forward Jamie Neushul and light forward Makenzie Fischer were smart enough to find holes in the net. Russians only response came by Evgeniya Ivanova, which converted fast break attack. They could not make use of the gift by Ashleigh Johnson, who was 20 second out of her post, 5-2. 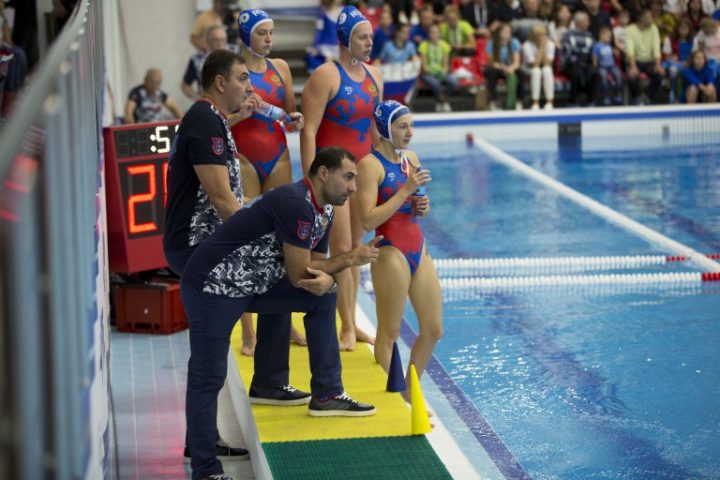 Hosts trumps had been kept silent later in the third, which got restarted and sealed by the US cap. Another fast break by Maria Bersneva was but a small cheer. They went 4 down and could not revive though. Reigning queens seemed to know everything on their set-up and were but of iron made. They never looked unfresh or tired. Teams traded points, where the USA was always best.

The fourth period saw Jamie Neushul and Olga Gorbunova exchanging fast breaks to make it an 8-4 game. The latter was on the scoreboard again killing powerplay at 28 seconds left in the competition, which could not change anything in the material point. Her nation earned silver as the USA got gold. 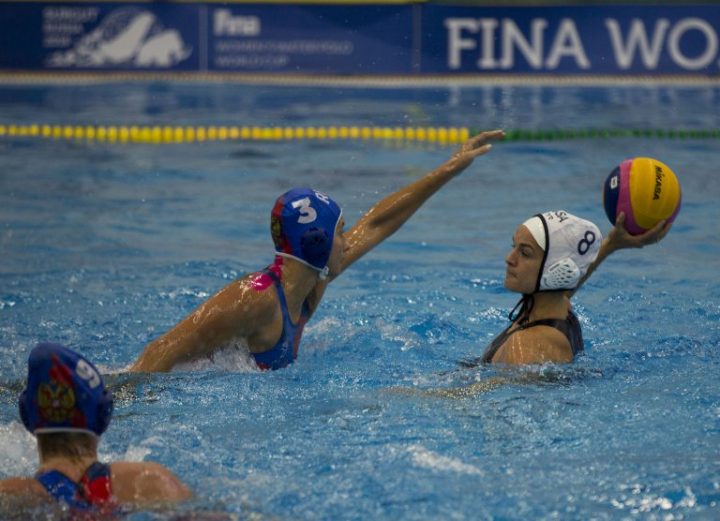