First place in the group can be crucial 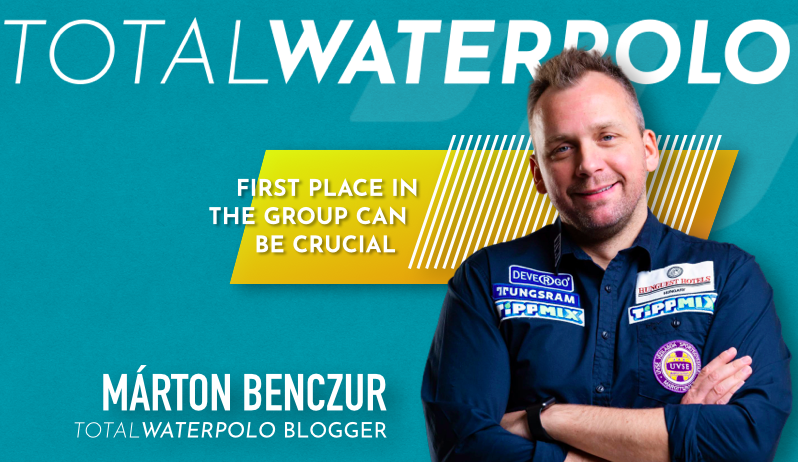 Marton Benczur, who coaches reigning Hungarian champion UVSE, is one of Total Waterpolo’s bloggers for the European championships.
These are his predictions about the women’s tournament in the Duna Arena in Budapest.

Greece, Hungary and Russia will fight for the top three places in the group, while Croatia, Serbia or Slovakia will be in fourth place

It will be an exciting battle between the top three teams, but it is hard to imagine that some of the other three sides could reach the first three places. It isn’t easy to predict the ranking of the top three teams, as well as which team will finish in the fourth place.

Based on the recent results, the match Hungary-Russia (January 15th) may decide the 1st place. In my opinion, the winner of this game will finish atop the group, which will give them a much easier opponent in the quarterfinals.

However, the Greek national team is a dangerous opponent, although they have not been so successful in the recent period. In spite of their poor performance in the World League, the Greeks come with excellent players (Tsoukala, Xenaki, Eleftheria Plevritou) and a great coach (Giorgos Morfesis). They have proven their quality countless times. They miss Alexandra Asimaki, and it won’t be very easy to replace her. If they manage to stabilize their defense, they could defeat both the Russian and the Hungarian team.

The Russian national team is a formidable squad with the sensational Ekaterina Prokofyeva and a great mixture of experienced stars (Karnaukh, Soboleva, Gorbunova, Simanovich, Ivanova or Timofeeva) with the dynamic and often unstoppable younger players (who have proven that they have a bright future by the results at the junior competitions). Their lightning-fast counter-attacks are their primary weapon. It is easier to stop them in the position attacks, but it’s not an easy task! Russia has featured in all of the Olympic Games so far, so it is clear that they came to Budapest to earn an Olympic berth.

Host Hungary is also a significant force and has chances to win the tournament, especially if they are not overwhelmed by the pressure of the home field. But they can draw strength from the encouragement of a fantastic Hungarian audience. There are a lot of excellent players in their ranks. One of the best teams in the world dives into the water with the indestructible Rita Keszthely, the sensationally goalkeeper Gangl Edina or the players of the younger generation Gurisatti, Vályi, Szilágyi, Rybanska. The strongest center-pair in the tournament is also likely to be in the Hungarian team with Gyöngyössy and Parkes. The Spanish team also has two centers with this ability.

We are looking forward to seeing how much more experienced players such as Garda or Matt, who have played smaller roles so far, will give the home team. The team will miss Dóra Antal, Gabriella Szücs and Dóra Tóth-Csabai, who were stable members of the national team in the past few years.

Serbia and Croatia have similar chances for fourth place.

Women’s water polo has developed a lot in these two countries, as well as in Slovakia. But, at the moment they aren’t able to reach the top three places.

The fate of the first three places is no question here. The Netherlands, Italy, and Spain will finish in the first three places for sure. A huge fight is expected here, as the group winner will almost certainly make it to the semifinals. None of these teams will have trouble to beat a fourth-placed team of Group A (Slovakia, Serbia or Croatia) in the quarterfinals.

One of the most potent teams in the world, the Netherlands, has proven its quality many times with stars Megens, Van der Sloot, or Sevenich, experienced Stomphorst, Genee, and the great youngsters Koolhaas, Voorvelt, Rogge. It is questionable how good a goalkeeper will be. The goalkeeper could have a decisive role, as their primary weapon is the defense, one of the best in the world. Their draw against the USA at the Holiday Cup in Princeton proves that they can achieve success in Budapest.

The Spanish team is the only team which arrived in Budapest with the Olympic ticket, and this is a very interesting situation. They may be less motivated, but they are more likely to present a real water polo without any burden. Spain has one of the most experienced teams in the world, with “veteran” players, regardless of age. Spain has excellent chances, as it plays with perhaps the best center in the world, the “indestructible” Maica Garcia, heavy bombers like Ortiz, Tarrago, fantastic left-handers like Forca and youngsters like Leiton.

The Italian national team is also a good mix of experienced fantastic players like Garibotti, Bianconi, Palmieri, or goalkeeper Gorlero and great youngsters like Avegno. With their incredible passion, they can reach any height in Budapest.

The French team is the closest to the fourth position, as neither the German nor the Israeli side has a talent like Geraldine Mahieu, who is also one of the best centers in one of the strongest championships in the world (Hungarian League).

The first place in the group is important for all six big teams (Greece, Hungary, Russia, Netherlands, Spain, Italy) as it can almost secure the spot in the semifinals. Being second or third is not as crucial as the encounters between these six teams can produce any result. The considerable stake (Olympic quota), the fantastic Hungarian audience (who can create a great atmosphere not only at the Hungarian games), and the stunningly beautiful venue guarantees that we will watch a tremendous European Championship!

I am curious to see who will “blow-up” from the circle of 18-22-year-old players. There are young girls in all six big teams who can decide the most important matches.