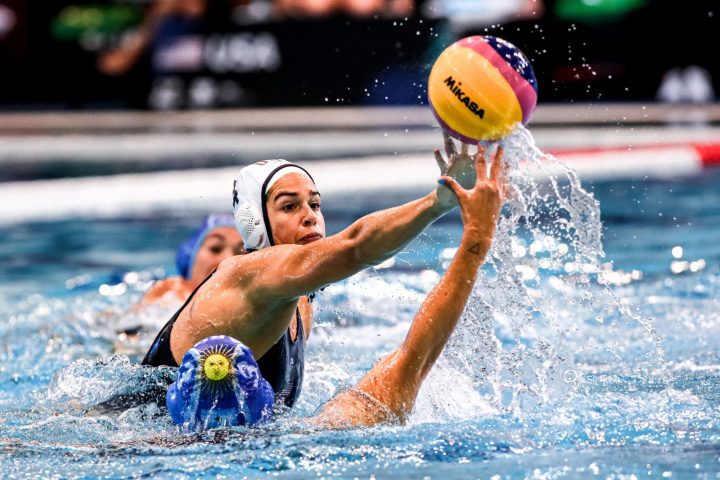 The final day of the women’s group stages have finished at the World Championships, with four teams having directly booked a place in the Quarter-Finals.

Italy, the United States, Australia and Greece all finished top of their respective groups, and in doing so bypass the Cross-over round of fixtures on Sunday.

The Italians made sure they finished top of Group A in Budapest with a monster 31-5 victory over Colombia. Hungary bounced back from the defeat on Wednesday to the Italians with  an 11-7 victory over Canada, meaning the Magyars finish 2nd in the group, and the Maples third.

And that means Canada will play the Netherlands in the cross-overs, who finished second in Group B in Debrecen with a very convincing 22-1 win against South Africa this afternoon. Argentina finished third in that group, and will cherish the idea of playing in front of the Alfred Hajos crowd on Sunday against Hungary.

The Aussie Stingers are on track to go big at these games, and were clinical against Brazil today (17-5). Their Oceanic neighbours, New Zealand, have an amazing opportunity to secure a top 8 finish, if they can beat France in the cross-overs.

Some may well be surprised to see that Spain did not finish top of Group D down in Szeged. However, they won’t have time to think about that, as a quarter-final with the United States beckons. 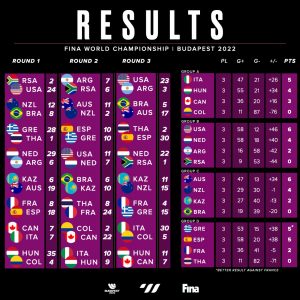 In the game of the day, Hungary put their defeat on Wednesday to Italy behind them, and secured a well-deserved victory against a impressive Canada.

At an ecstatic Alfred Hajos, which was at it loudest since the tournament began, the Hungarians knew they had to show up to avoid a really difficult game with the Netherlands in the Cross-overs, and they did, putting on a excellent display.

It was the Rita Keszthelyi show for much of the game. The most experienced Hungarian ran the game for Attila Biro’s side. Greta Gurisatti was also in fine form, scoring some impressive goals and getting a number of assists. Alda Magyari was, as ever, a huge presence in Hungarian goal, making some top saves on the Canadian extra-player situations.

Canada will be disappointed with how the third period went for them, as they were left chasing the game from then on. However, this group of superb Canadian players really have something about them, and will be an extremely difficult prospect for the Dutch in the Cross-overs.  Hayley McKelvey (3) led the scoring for David Paradelo’s side, but Verica Bakoc and Emma Wright caused real problems for the hosts.

Hungary know that they will enjoy the contest on Sunday against Argentina, and in a way, the extra-game in front of a hugely supportive crowd will only help them build momentum before they could face Australia.

Italy sealed the top spot in Group A in style with a 31-5 victory over Colombia. While Colombia did not deserve to lose by such a margin, the result reflects the difference in quality at these championships.

Silvia Avegno ran riot in front of the Colombian goal, scoring six, Sofia Giustini turned it on in the last quarter to net five –  with Tabani (4), Biaconi (4), Galardi (3) and Marletta (3) all bolstering their stats.

Carlo Silipo and his Setterosa will be grateful for the day off on Sunday, before awaiting the winner of New Zealand and France in the quarter-finals.

Argentina were brought crashing back down to earth after yesterday’s heroics against South Africa, as they were schooled by the reigning world and Olympic champions, the United States.

Adam Krikorian will have expected his side to start well, and they did, taking a 11-0 lead at half time. Krikorian will be particularly happy that some of the newer players featured heavily on the scoresheet: including Bayley Weber (4) and Denise Mammolito (4).

The Netherlands couldn’t finish top of Group B, but that didn’t stop them from outclassing South Africa today. It was an excellent defensive display for Eva Doudesis and his team, but the Oranges will perhaps be turning their heads at yet another excellent performance by the young Lola Moolhuijzen, who with five goals, even outscored Simone Van de Kraats (4) today.

The Dutch will play Canada on Sunday, which is by no means a picnic. They will have to be on their guard if they hope to progress to play Greece in the Quarter-Finals.

Australia were too strong for Brazil in Sopron, despite a last quarter resurgence from the South Americans. Bronte Halligan topped the scoring charts with five finishes, while there were decent goal hauls for Amy Ridge (3), Zoe Arancini (2), Tilly Kearns (2) and Hayley Ballesty (2).

Australia were always on top, converting with ease. The only negative part of the Stinger’s performance was the three missed penalties. It didn’t matter in this game, but it is a trend we have seen over the last few days from the Aussies that they hope will not continue further on into the competition.

Brazil huffed and puffed, but were simply outmatched. The highlight of the game, however, was a quite spectacular backshot from 8m by Leticia Belorio – who netted twice in the match.

New Zealand have finished second in Group C with a hard-fought victory against Kazakhstan. Angela Winstanley-Smith will be thrilled that her side can potentially make the top eight at a World Championships, if they can beat France in 48 hours.

While Kazakhstan were decent this evening, they had no answer to Malia Josephson, who bagged a quad. Emmerson Houghton found the back of the net three times, as did Elizabeth Gault.

Marat Naurazbekov will know his side needs a miracle in the next round of games, they face the reigning Olympic Silver Medallists, Spain.

It was the magnificent seven for Judith Forca Ariza, six of the best for Bea Ortiz, and a fabulous five for Elena Ruiz as Spain predictably walked-over Thailand. The result was never in doubt, even before the game was played.

A little bit of credit has to go to Thailand, in the face of such a hugely demoralising defeat. Kritsana Puangtong will no doubt cherish her World Championship brace past Spain’s keepers.

However, Spain will not be celebrating too hard, as the hardest challenge awaits them. They will have no problem in defeating Kazakhstan on Sunday, but they will then need to prepare for the toughest of assignments in the shape of the United States.

Greece have quietly and efficiently secured top spot in a really tough Group down in Szeged, as they comfortably defeated France tonight. It was three of their top squad members at this competition so far who all led the way for the Greeks – with Eleftheria Plevritou, Vasiliki Plevritou and Eleni Xenaki all grabbing hat-tricks.

And it was just as well that the Greeks won big against Les Bleus, as they have pipped the Spanish to the top-spot in the Group.

Alexia Kammenou will not be resting over the next few days, as her side will need to keep focus on the game between Canada and the Netherlands. Its a tough draw for the Greeks, but they are more than capable of matching nearly all of the sides at these games. 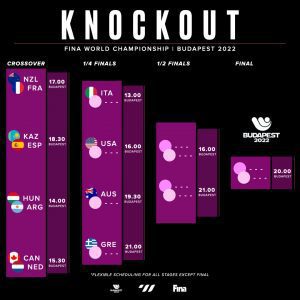