FTC Is Back on Hungarian Throne after 18 Years! 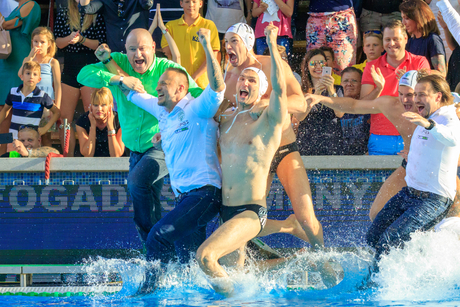 The news about the Hungarian finals come from Waterpolo.hu. Zsolt Varga’s team defeat Szolnok 8:7 in the deciding fifth leg of their E.ON Men’s Championship final to ensure Ferencváros are crowned champions of Hungary for the first time since 2000.

This was the long-awaited, winner-takes-all clash which every Hungarian water polo fan had been waiting for: Ferencváros versus the reigning champion Szolnok for the right to lift the 2018 E.ON Hungarian championship trophy. The Komjádi pool tribunes were full an hour before the start as everyone waited for the teams to emerge and seek to seize the initiative. It was hard to decide who was the favorite.

The two sides were almost impossible to split in the first quarter either. Fradi took the lead three times with the help of Jaksics, Dániel Varga, and Stefan Mitrovic but Szolnok fought back each time with Andrija Prlainovic, Gergő Zalánki, and Milos Cuk before Milan Aleksic snatched the lead for Sándor Cseh’s side.

The second quarter brought drama to the pool. Particularly, from the Szolnok’s side, as Gábor Kis battled hard in earning a last-second penalty but Soma Vogel saved Milos Cuk’s effort from five meters. It was an occurrence which meant they couldn’t reach half-time with an only one-goal lead. Aaron Younger had put Cseh’s team to 5:3 in front before Norbert Madaras and Bence Bátori traded goals. Márton Vámos and Dániel Varga hauled Fradi’s level despite the best efforts of in-form Viktor Nagy in the guest’s goal.

The tension increased even more after the break, especially as both teams unsurprisingly showed signs of tiredness. Indeed, there was only one goal scored in the whole of the eight minutes. Dániel Varga notched his third and in doing so smashed his own goal drought which had stretched back through the previous four legs. Fradi, therefore, started the final period with 7:6 and they doubled that lead with Madaras, Stefan Mitrovic finding the two-time Olympic champion in an unfamiliar center position from where he made no mistake. Andrija Prlainovic pulled one back for Szolnok with 1:19 left on the clock but it was too late as Ferencváros hung on to claim their first domestic league title in 18 years.