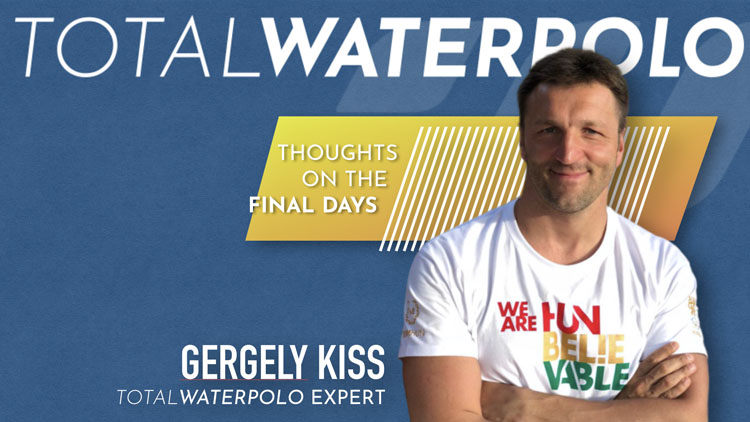 Leading up to the final days of the competition, we saw some thrilling games as well as real surprises.

In the women’s tournament, I really expected the Dutch and Italian teams in the semifinals. And of course, in the men’s competition, Italy and Serbia were absolute favorites for the medals. In the end, these four teams have to fight for an ungrateful 5th place. On the other hand, the four semifinals we witnessed restored the conviction that our sport is one of the hardest and most beautiful disciplines in the world! All games finished with quite a lot of goals and thrilling final minutes in front of packed stands.

Big applause for the Spanish and Hungarian water polo for representing their countries with both teams fighting for medals!

The Spanish men and women showed a highly disciplined as well as simultaneously very brave and self-confident way of playing.

In my opinion, Hungary managed to beat Montenegro because of a minimal advantage in their line-up in addition to the most unique and skilled player in the world. Guess who 🙂 ?

As our whole nation, I am very happy about the men’s final because we now have the first team qualified for the 2020 Tokyo Olympics.

The big question of both finals will be, if Spain can pull off a very rare feat – winning the gold medals in both, male and female tournaments.

My answer, of course, is hopefully not.