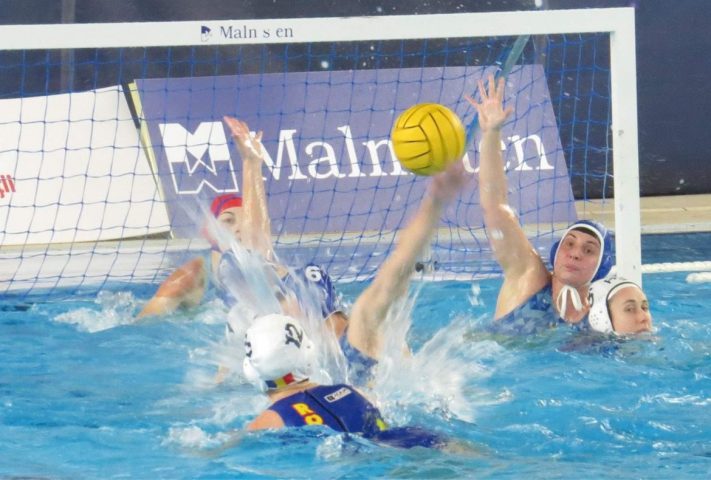 Germany and Romania joined Greece in becoming the second and third teams to qualify for the Women’s European Championships in Split at the end of the summer. Germany smashed Ireland, while Ukraine were easy enough for the Romanians – who have surprised many by qualifying for the Euros at Slovakia’s expense. The two teams face each other tomorrow for the top spot in Group A. In Group B, Serbia are basically there – only a very unlikely Swiss victory over Greece tomorrow can deny the Serbs a place in Split, but if they beat Turkey, they are definitely through.

Germany and Romania have both secured a place in the European Championships main draw in Split later this year having both beaten Ireland and Ukraine respectively. In truth, Germany’s game against Ireland was a rout, with three players scoring four times (Vosseberg, Fry and Tadday) with the Deike sisters (Ira and Gesa) both putting away hat-tricks. The score was 14-0 to Germany midway through the second period (10-0 after the first quarter). Meanwhile, Romania eventually beat Ukraine with five goals from Krisztina-Emese Szeghalmi leading the way.

Tomorrow the winner of the group will be determined, when both Germany and Romania will face off. The game should be exciting, given their scores have been fairly similar against the other teams in the group. Germany may have the edge slightly, but with a home advantage, Romania could cause another upset.

Serbia and Switzerland recorded wins today, with the Serbs comfortably beating Belgium, while Switzerland saw off Turkey in a close contest. The goals were shared fairly evenly in the Serbian team, with only one outfield player not scoring. Milicevic and Vukovic both scored three, while there were braces for Svec, Lujic, Trmcic, Novakovic, and Kaplarevic. The Swiss were pushed right to the end, but goals from Lotti Verhagen (2) and Athena Grandis in the last period was enough to ensure the win.

With Greece already qualified yesterday, the second European spot if still undecided in Group B. However, it must be said that Serbia are overwhelming favourites to go through, as they only have to beat Turkey in Zrenjanin tomorrow. Switzerland must beat Greece to stand any chance of qualifying, and hope that Turkey can cause an upset.