Greece and Spain finished atop their respective groups of the men’s Olympic tournament at the Tsutsumi Aquatics Centre in Tokyo.
European champion Hungary and World champion Italy shared the points in a low-scoring first match of Day 5 (5:5), and after that Greece needed a win over the USA to climb to 1st place of Group A. The Greeks showed no mercy, they defeated the USA 14:5.

In the third match of the day, Serbia beat Montenegro easily (13:6) to cement 3rd place in Group B. An encounter between Spain and Croatia decided the winner of Group B. Spain celebrated an 8:4 win and kept a perfect record (5 wins in as many games). The Spaniards go to the quarterfinals from 1st place in the “Group of death”.

Greece and Italy are undefeated, as well as Spain, but they won 9 and 8 points respectively.

There will be a lot of derbies in the quarterfinals. World champion Italy will play against Olympic champion Serbia,.Hungary and Croatia will face off…

The day was finished with the encounters between the teams, which were eliminated from the tournament before the last round. Japan defeated South Africa, while Australia beat Kazakhstan.

The derby encounter between two champions was the lowest-scoring game of the tournament.

Team efforts in defense (not only goalkeepers) produced this score.

Italy needed a 2-goal win to secure 1st place, while Hungary had to achieve a victory to move from 3rd place. But, neither of the teams achieved its goal. Still, Italy could be happier, because it didn’t drop to 3rd place (which would have happened if they had lost) 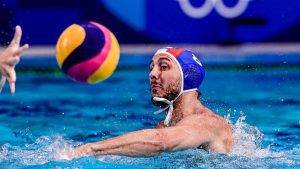 Szilard Jansik scored an opening goal for Hungary in the third minute. Shortly after, Echenique equalized with a man-up. Denes Varga closed the first period. A minute and 38 seconds before the first break. Varga sent a projectile from 8-9 meters for 2:1.

Aicardi leveled at 2:2 early in the 2nd period. Denes Varga netted two goals in the second quarter within four minutes – one action goal and another with a power-play advantage. Hungary built a 4:2 lead 90 seconds before the middle break.

Italy’s captain Pietro Figlioli opened the third period by converting a penalty for 3:4. The World champions kept a 1-goal distance until the last minute of this period. Daniel Angyal converted an extra-man chance just two seconds before the last break for 5:3.

Hungary couldn’t score in the last eight minutes. Figlioli found the net for 4:5 (25th minute). Francesco Di Fulvio converted a man-up for 9:3 with just 93 seconds left on the clock and equalized (5:5). After that, both sides had chances to secure a win, but defenses did a good job.

The USA was cemented in 4th place before the game and had nothing to get or lose in this match. Greece had to win to move to the top of the table.
The Greeks outplayed the Americans. They dominated from the beginning. After a 4:1 first quarter, there were no goals for almost four minutes in the second quarter. The Greeks earned a penalty shot in the 12th minute. Vlachopoulos converted it to a 5:1 lead and opened a series of four goals in less than two minutes. Stevenson found the net for 2:5, Argyropoulos scored for 6:2, but Obert reduced the gap (3:6). 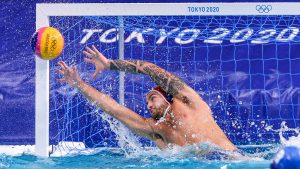 Irving cut the deficit to two with an action goal in the 19th minute (4:6), but Greece responded with a 3:0 rush. It jumped to a 9:4 lead (21st minute) and didn’t let the Americans come back. Until the end of the game, the Europeans, led by Konstantinos Genidounias and Ioannis Fountoulis, increased the margin of their win to nine (14:5). 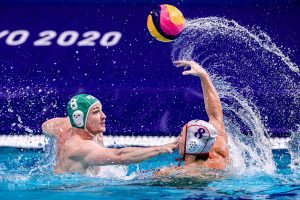 Host Japan fought hard in the matches against favorites, but it failed to win at least a point against the top four ranked teams.
Today, they finally, recorded a win. South Africa was also motivated. The Africans kept up with the home team for a while. They equalized four times in the early stage of the game (1:1, 2:2, 3:3, 4:4), but the Japanese took control in the second period. They built a 4-goal lead by halftime (12:8), and they blew away the rival after the middle break. Japan didn’t slow down until the end. They played very aggressively in the offense.

Some statistical data say a lot. Japan had 45, and South Africa 21 shots

Croatia started the match without an experienced Paulo Obradovic. He suffered a minor injury a few days ago, but he could play today. Still, head coach Ivica Tucak gave him a break today.

Spain grabbed an early 2:0 lead after less than two minutes of play (Granados from a penalty and Famera with an extra player). In the 7th minute, Luka Bukic converted a man-up to put Croatia on the scoreboard.

Defenses worked excellently in the second period. A young Bernat Sanahuja was the only player who found the net in this quarter. In the 13th minute, he converted a man-up for 3:1.

Marko Macan scored from an extra in the 17th minute to cut the deficit (2:3), but Alvaro Granados responded immediately for 4:2. Interestingly, it was the first action goal in the match. It came in the 18th minute. 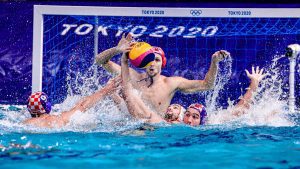 Shortly after, Bukic halved the distance (3:4), but the Spaniards regained a 2-goal lead in the 19th minute when Mallarach converted a man-up. A minute later, Spain’s center forward Roger Tahull, scored an admirable. Bijac saved a shot by Perrone, but Tahull, who was surrounded by two defenders, managed to take the ball after the save and sent it into the net for 6:3. Three goals separated the rivals for the first time in the match. That was, maybe, the crucial moment. Alberto Munarriz gave Spain a 7:3 lead in the finish of this quarter.

Elvis Fatovic found the net for 4:7 in the 27th minute and boosted Croatia’s hopes. But, the silver-medalists from the Rio Olympics couldn’t go further. Two minutes and 41 seconds before the end, Alejandro Bustos netted for 8:4, and that was the end of the contest. The silver medalists at the 2019 World Championships and 2020 European Championships secured 1st place in the group.

Today’s schedule in Group B started with an encounter between arch-rivals Serbia and Montenegro, which was decisive for 3rd place. Before the first whistle, it was known that the winner of this match would face Italy in the quarterfinals, while the losing team would play against Greece on Wednesday.

Serbia “chose” to play against the World Champions. The title-holders demolished Montenegro, but it should be mentioned that Montenegro played with 10 field players and two goalkeepers, because Spaic is still out of the team due to an injury. But, that wasn’t a factor that made a difference in this match.

The Olympic champions played in the same way as against Australia. In the first half of the game, Serbia played excellently in front of Montenegro’s goal. It didn’t make many mistakes in defense, which was commanded by Branislav Mitrovic. Centre-forwards Pijetlovic and Lazic did a good job, as they forced a lot of exclusions and penalty shots (but, Montenegro also had a lot of chances with a power-play advantage and from penalty shots) in this match). All in all, Serbia completely outplayed its rival in the first half, and Montenegro wasn’t able to come back after the middle break. 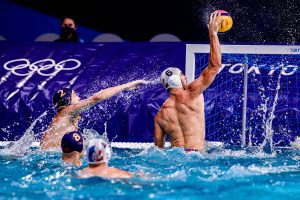 Serbia took a flying start, and earned a 5:0 lead. Montenegro scored its first goal just 40 seconds before the end of the first period when Matkovic converted a penalty, but Pijetlovic responded immediately with an extra player for 6:1. In the middle of the second quarter, Filip Filipovic sent the ball into the net from a penalty line and the Serbs earned a huge 7:1 advantage. By the middle of the third period, the reigning champions made an 8-goal advantage. In the 20th minute, Prlainovic converted a penalty for 10:2 and killed Montenegro’s last hope.

The last game of the group stage of the men’s tournament was a game for pride. Australia and Kazakhstan lost chances to advance to the quarterfinals earlier.

The “Aussie Sharks” had some great moments in Tokyo (they beat Croatia), but losses to Montenegro, Serbia, and Spain stopped them in their efforts to reach the quarterfinals.

The Australians were favorites today and didn’t let themselves finish the tournament with a loss. They conceded only one goal in the first half, while they netted seven and had a 7:1 advantage at halftime. Australia, led by Rhys Howden and Blake Edwards, opened the third period with a 3:0 rush and jumped to a 10:1 lead. After that, Kazakhstan started climbing back. Shakenov found the net for 2:10 in the 22nd minute and ended his team’s goalless phase, which lasted 16 minutes (Ruday scored the 1st goal for Kazakhstan for 1:3). 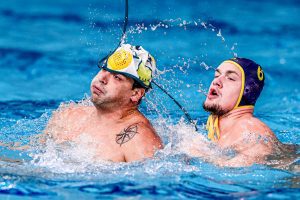 Australia earned a 10-goal lead in the fourth period (14:4, 15:5), but the Kazakhs reduced the gap with two goals in the last minute.

Australia is equal in points with Montenegro, but the World LEague winners defeated the “Aussies” on Day 1, and, as it turned out, that win secured the Montenegrins 4th place. 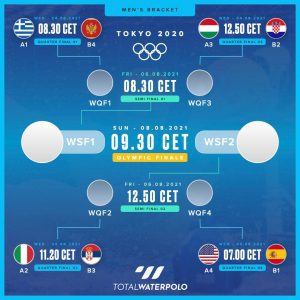