Greece defeated Hungary (9:6) in the first semifinal match of the men’s Olympic water polo tournament at the Tstatsumi Aquatics Centre in Tokyo and reached a historic success.

By advancing to the final, the team guided by Theodoros Vlachos secured a first-ever Olympic medal for men’s Greek water polo. Greece’s best achievement before Tokyo was 4th place in Athens in 2004.

Greece has won only one medal so far, but it was at the female tournament in Athens (the Greek girls finished 2nd).

Serbia and Spain will face off in the second semifinal.

Croatia defeated Montenegro in the first semifinal for places 5th-8th.

Today’s match was the second encounter between Greece and Hungary in Tokyo. On Day 1 of the group stage, the Greeks recorded a narrow win over the Hungarians -10:9. Today, they controlled the match all the way and deserved the win.
Hungary was chasing Greece throughout the first three low-scoring quarters. The European champions managed to level the score five times (until 5:5), but the Greeks didn’t let Hungary go ahead. Early in the fourth period, the Greeks built a 2-goal lead for the first time (7:5), and Hungary couldn’t return in the match afterward.

The Hungarians managed to halt Greece’s best scorer Konstantinos Gendounias, who didn’t find the net today (0/6), but other players were outstanding. Stylianos Argyropoulos stood out with four goals.

The teams entered the match cautiously. They focused on defense, and it took a while before the first goal was scored. Defenses dominated in the first quarter. After all, that’s something that we expected of Greece, which showed excellent defensive play in the tournament. In the 6th minute, Hungary had a chance to score with a double man-up, but Zalanki’s shot was blocked. The Hungarians paid for that missed chance immediately. In the next possession, the Greeks earned a man-up, and Argyropoulos broke the deadlock to give Greece a 1:0 lead a minute and a half before the first break.

Greece got another man-up in its last possession in this period. Nagy saved a shot by Argyropoulos, but Gkiouvetsis scored from a rebound. Hungary got back into the match with Marton Vamos’ goal. He scored with a power-play advantage just five seconds before the end of the first period.

Arrgyropoulos added another goal with a man-up in Greece’s first possession in the second quarter for 3:1. Less than 30 seconds after, Zalanki answered with an action goal for 2:3, and it seemed that it would be a lot of goals in the second period. However, defenders did a good job, and it was tough to found the net. It stood 3:2 at halftime.

Matyas Pasztor, the best scorer of the Hungarian League, opened the second half and equalized (3:3). But, the game followed the same pattern as in the first half. In the middle of the quarter, Argyropoulos made it 4:3. A minute after, Krisztian Manhercz, who displayed a flawless performance in the quarterfinals (seven goals against Croatia), scored his 1st goal today for 4:4. In the 23rd minute, Argyropoulos put the Greeks in front again – 5:4. 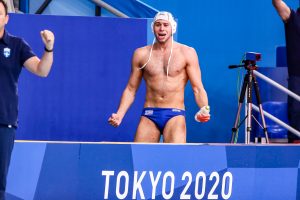 Early in the fourth period, Manhercz converted a man up for 5:5. In the next possession, the Greeks scored their first action goal in the match. After a very nice and quick team action, Ioannis Fountoulis found the net for 6:5. A minute after, Angelos Vlachopoulos scored from an extra for 7:5. The difference between the teams increased to two goals for the first time in the match.

Denes Varga gave Hungary last hope with a goal from a distance (6:7). However, Greece responded with two goals in the following two minutes. Gkiouvetsis netted with a power-play advantage and Skoumpakis scored a fantastic action goal from 8m. The Greeks went to 9:6 in the 30th minute and secured a medal. Great celebration among the players of the winning team started after the final buzzer.

Since 1991, Greece has played 16 semifinals at major competitions. Today, the Greeks have achieved just the second win in the big semifinals since 1991. The previous victory was, also, against Hungary. It happened at the 1997 FINA World Cup in Athens. Greece beat Hungary 8:4 and then lost to the USA in the gold-medal match.

Montenegro and Croatia arrived at the Olympics to win a medal. So both teams lacked motivation before the classification matches. Croatia defeated Montenegro 13:8 in the group stage, but the stake was much bigger in that match than today since the neighbors were still battling for their spots in the quarterfinals. 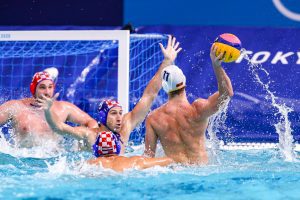 Both teams started slowly. In the second minute, Vukicevic gave Croatia a 1:0 lead from a counter-attack. But, it was the only goal in the first quarter.

The second period saw nine goals. Croatia played better. Fatovic doubled Croatia’s advantage, but the Montenegrins leveled at 2:2 and again at 3:3. Croatia responded with three goals and earned a 3-goal lead for the first time (6:3). Ivovic scored for 4:6 in the 15th minute

The Montenegrins tried to come back, they consolidated their attack and made several good opportunities to score, but Croatia goalkeeper Ivan Marcelic did a great job. He didn’t let Montenegro catch up with Croatia. Marcelic posted 16 saves today.

Still, Aleksandar Ivovic opened the third period with a goal from a counter-attack for 5:6. In the middle of the quarter, Montenegro trailed by a goal again – 6:7 (it was Ivovic again), but shortly after, the Croats built a 3-goal lead for the first time. Loncar converted 6 on 4 in the 21st minute. Josip Vrlic netted a brilliant backhander for 9:6 in the 23rd minute. From that point on, the distance between the teams was never smaller than two goals.

Midway through the fourth period, the Croats jumped to an 11:7 lead after Jokovic found the net in a fast attack. Immediately after, Ukropina responded from an extra – 8:11. But it didn’t take a while before Croatia regained a 4-goal lead. Vrlic made it 12:8, and that was the end of the contest. The Montenegrins scored two consolation goals and halved the distance in the remaining time.