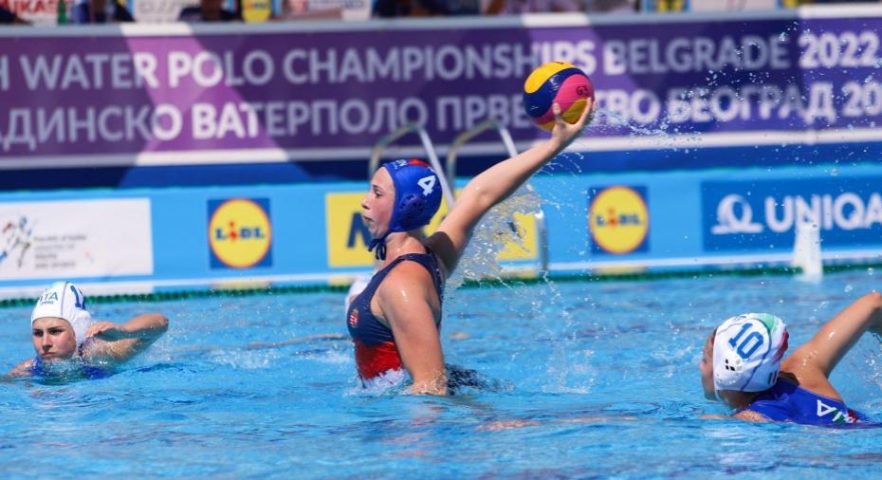 Four top seeds have automatically advanced to the quarterfinals of the Women’s World Youth Championships in Belgrade, following the completion of the group stages.

Tomorrow will be a day free for Spain, Hungary, Greece and the Netherlands, and while they will no doubt enjoy a day off, they will all be scouting for their potential quarter-finals rivals in the on Friday.

The big story of the day comes from Group B, where Greece defeated the United States in a terrific game of water polo. There were some magnificent performances for the Greeks from Foteini Tricha, Dionysia Koureta, Sofia Tornarou and Stefania Santa.

Elsewhere, Hungary proved too strong for the junior Setterosa – with Kata Hajdu taking the lead as the tournament top goal scorer with another four conversions this afternoon.

New Zealand’s unbeaten run was called to a halt by the reigning Champions Spain, while the Netherlands weren’t too troubled by Australia in the opening game of the day.

There were victories elsewhere for the two ‘Stans, with Kazakhstan beating Turkey and Uzbekistan outmuscling Japan.

Canada just miss out on second place in Group C because of goal difference, despite finishing level on points with Australia. In the Balkan derby, the last game of the day, the Croats played some sublime attacking polo to consign the hosts to a bottom four finish.

With an impressive 12-8 victory over Italy, Hungary have finished atop of Group A, and automatically qualify for the quarter-finals.

The Hungarians started the game really well, and early braces for Panni Szegedi and Nora Golopencza helped to put Marton Benczur’s side 7-3 up midway through the game. But a brief momentum shift put Italy on the front foot; scores for Paola Di Maria, Morena Leone and Emma De March pulled the junior Setterosa within a single score (7-6). 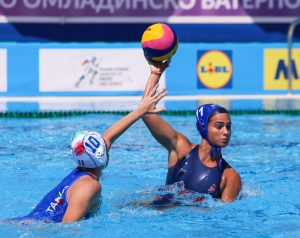 But all the impetus faded away moments before the end of the third. Eszter Varro and Kata Hajdu restored Hungary’s vital two goal cushion, and another two in the last for the formidable Hajdu, who was named MVP for the second time this week, was enough to shut-out Giacomo Grassi’s Setterosa.

Kazakhstan finally came good against Turkiye in the other game in the group, winning 14-3. Darya Pochinok was lethal from 5m, and hit a magnificent seven for her side.

Greece pulled off a quite spectacular victory this evening against the United States in one of the most exciting games you will ever likely see. The Greeks trailed for a large portion of the match, but a clinical last period was enough to seal a quarter-final berth, even despite the American’s surging comeback in the last moments of the game.

Greece will now progress to the quarter-finals, while the United states will now compete in the cross-overs.

There was a really high intensity to the game, with both sides knowing what was at stake. In the first, there were some beautiful scores from Julia Bonaguidi and Jenna Flynn for the American. The Greeks showed their quality though, with tidy goal from centre by Dionysia Koureta and a spectacular shot from range by Sofia Tornarou .

Team USA led by two goals (4-2) at the end of the first period off a Ava Knepper penalty, before Margaret Hawkins shot was misfortunately diverted into the Greek goal off Sofia Tornarou’s head.

The second quarter was a game of tug of war. Greece showed spirit, and made up the lost ground with two scores early in the second: Foteini Tricha’s shot from the right squirmed past Carpenter at the near post in the American goal, before Nefeli Chaldaiou levelled up from centre (4-4).

But another peach from Bonaguidi from distance, and a second score in the hole from Margaret Hawkins restored the American buffer. Before long though, Greece cancelled those scores out via Sofia Tornarou (from the top) and Foteini Tricha (from a pinpoint 5m penalty).

The goals dried up in the third, but the excitement remained. After USA were denied an eight goal from a swift VAR review, Greece equalised with a blistering counter attack; a long ball over the top found Dionysia Koureta, who finished perfectly into the bottom left-corner.

Greece then pulled ahead to lead for the first time –  it was a driven bounce shot into the roof of the net by Stefania Santa who converted confidently, before Foteini Tricha secured her hat-trick with a thunderous shot off the bar and in to make it 9-7.

Goals from Ava Knepper and Jenna Flynn kept the USA in the tie, but after some top defending, Sofia Tornarou secured her hat-trick, before an outrageous post and in goal from Nefeli Chaldaiou right on the buzzer gave Greece a two goal lead into the last.

The last quarter proved decisive, as a stubborn Greek defence shut-down the Americans, but Eftchyia Karagianni’s team were clinical in offense. Koureta, Tricha and Santa all converted to suck the life out of the United States, who simply could not find a way to score and trailed 15-11.

There was big drama in the last minute though, as the United States did eventually penetrate the Greek defence via Jenna Flynn and two goals from Margaret Johnson to pull back within a single score (15-14).

But the United States couldn’t find the all-important equalizer, and Greece won the match, securing a spot in the quarter-final.

In the game between the two other teams in Group B, Uzbekistan secured 3rd place with a 19-11 victory over Japan. Ugiloy Abdulkhaeva, Uzbekistan’s top goal scorer at the competition, added another six strikes to her tally, taking her up to a respectable eleven goals in Belgrade.

Three scores from Feline Voordouw handed Australia their first defeat at the competition, as the Netherlands top Group C. The eighteen year old player of Polar Bears is now into double figures for the competition. Moolhuijzen, Den Ouden and Van de Geijn scored two each.

The junior Stingers finish level on points with Canada in the group, but secure second with their superior goal difference of +1, against Canada’s -2. 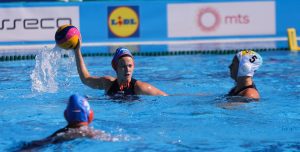 Canada are therefore in third, after they secured their first points of the competition against South Africa (15-7).

The African’s led after the first period, but six consecutive scores from six different players for the Canadians (Both Hlohovsky Andrist sisters, Featherstone, Peiravani, Browne & Ulmer-Lutudromu) put the Maples in the driving seat. Double scores from Brooklyn Plomp and Ash Ferguson made sure of the victory. 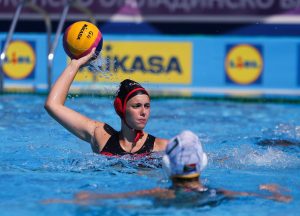 Spain finish top of Group D, ending New Zealand’s hot-streak, with a hard-fought 17-11 victory. Spain had their noses ahead after a chaotic opening quarter thanks to a 1st period hat-trick for Alba Munoz, but a pair of scores for both Darcy Spark and Agatha Weston ensured the Kiwis stayed in the game at half time.

Ultimately Spain were the better side though, and had all the quality in the game. Bertran (Mataro), Piralkova (CNAB), Moreno (Feliu) and Munoz (Mediterrani) all finished the game with hat-tricks. 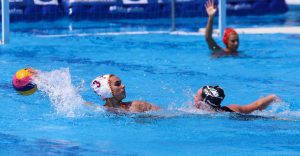 Croatia ensured they still have something of note to play for in Belgrade, after getting the better of their neighbours and the hosts, Serbia. Jelena Butic netted seven times of Mia Simunic’s side, while Ria Glas and Iva Rozic both go home with deserved hat-tricks.